Uranium just made a stealth surge

The average citizen’s knowledge of uranium and nuclear power comes from disaster movies or soundbites about accidents like Japan and Chernobyl. Or watching an episode of the Simpsons where Homer screws things up at the Springfield Nuclear Power Plant.

It’s easy to paint nuclear energy as the boogeyman.

The reality is that nuclear energy has provided – and continues to provide – the world with stupendous amounts of clean, safe, emission-free electric power.

Coal, which is also used to generate electricity, has killed far, far more people than uranium.

But the “other yellow metal” is back in the news in a major way. It just staged a massive move to the upside.

Uranium prices are up over 30% in the past few weeks and the Katusa uranium indexes are up even more. See for yourself below… 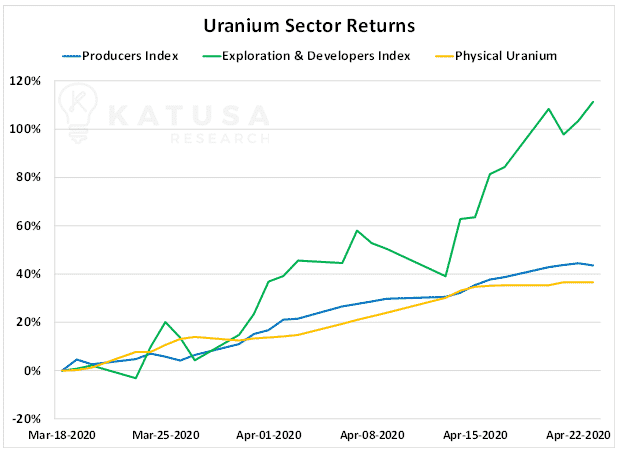 But uranium stocks are extremely volatile. (If I could underline that 3 times, I would).

And the metal price moves based on government intervention, policies and production.

Let’s Get You Up to Speed on Uranium…

Without nuclear power, the lights would go off for many Americans.

Nuclear energy is responsible for about 10% of global electricity production. If the world wants to cut carbon emissions and keep the lights on, nuclear energy’s share of production must grow.

Base load power is consistent, dependable power. It’s always there and always on. It is the foundation of a healthy electric power grid.

Base load power contrasts with solar and wind power, which can fail to produce power during the night (in the case of solar) and during periods of calm (in the case of wind).

The energy content of uranium is approximately 3 million times greater than that of fossil fuels.

If you’re a country with little fossil fuel resources like South Korea or Japan and you want safe, secure energy to keep your economy running, nothing beats uranium.

Is Uranium Going Prime Time? Not So Fast…

Let me make it very clear (I believe I have for the last four years), that uranium isn’t a supply issue—it’s a demand issue.

Again, there is no shortage of uranium.

On the mine supply side, the central Asian country of Kazakhstan (yes, where Borat is from) is currently responsible for 38% of global mining production.

Canada was a distant second at 22% (but no uranium is mined in Canada currently due to the virus and low prices of uranium) and Australia is a distant third (12%).

A handful of countries produce modest, but meaningful, amounts of uranium.

We are watching potential Kazakh supply chain issues in sulfuric acid and well casings for clues to long-term production issues.

Cameco will need to buy 11 million pounds in the market to meet its sales contracts.

In addition, I believe production out of Kazakhstan in 2020 will be lower than expected, due to the forced shutdowns and maintenance.

This will eat through some of the above ground inventories and could result in utility companies locking in higher long-term contracts in late 2020 or early 2021.

This is all bullish for the price of uranium.

But, I do not see a need to buy early-stage, undeveloped uranium resources in negative swap line nations (-SWAP) which I will detail this major importance in the very near future (keep your eyes on an alert).

In a moment, I’ll discuss why you want to focus on “Made in USA” uranium.

How Much Does It Cost to Produce Uranium?

Here are the top 30 producing uranium mines in the world, and their mine site cash costs. 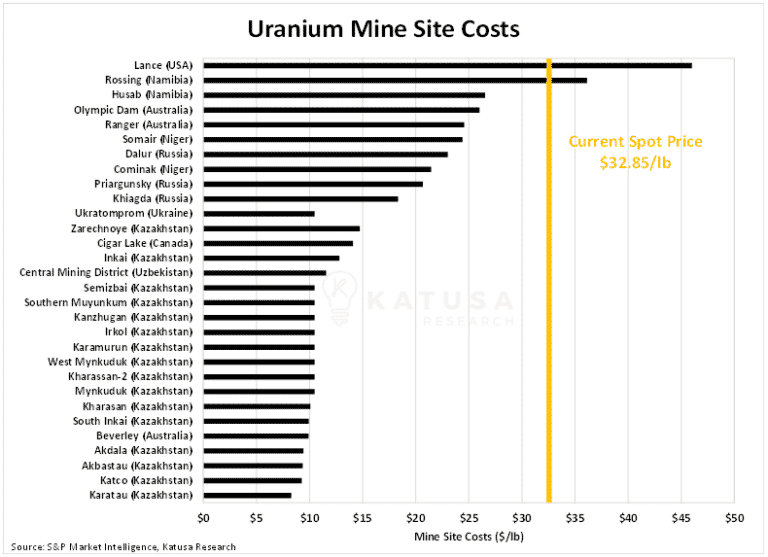 But it’s quite evident from the chart that even if you include a 50%–100% premium on the mine site cash costs, there is a lot of uranium that can be produced below the current spot price.

This brings me back to my rationale behind buying U.S. permitted and built uranium production.

Trump has his hands full right now dealing with the virus, the economy, the oil patch disaster, and a re-election campaign.

Unfortunately for all the uranium bugs, uranium isn’t very high on his priority list.

That said, Trump will do whatever he can to save the oil patch in the U.S.

After that, the U.S. uranium sector will get some assistance with the expected Department of Energy purchase of U.S.-produced uranium at a fixed price between $45–$55 per pound.

I expect this to be announced later this year, sometime around the election. 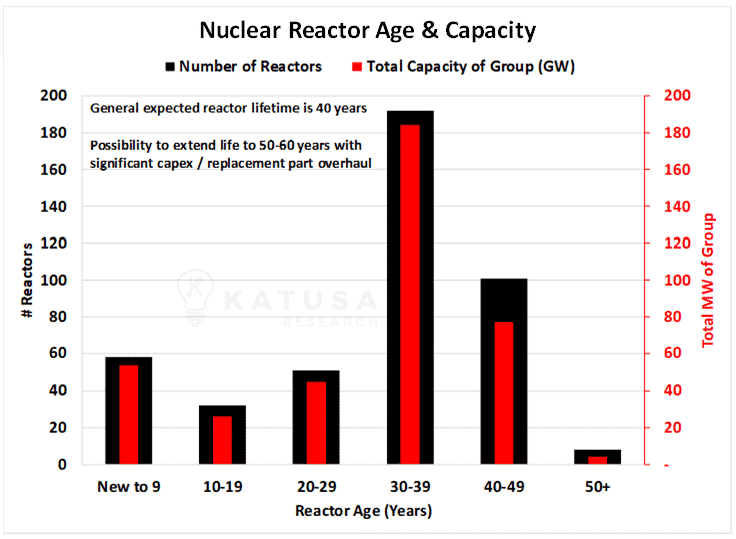 The developed world’s nuclear reactors are aging. On average, they’ve been in operation for 41 years.

The average nuclear reactor was designed and permitted for only forty years. Most are getting extensions.

The chart below shows all operating, under construction, and planned nuclear reactors coming online and operating for fifty years before they get shut down. 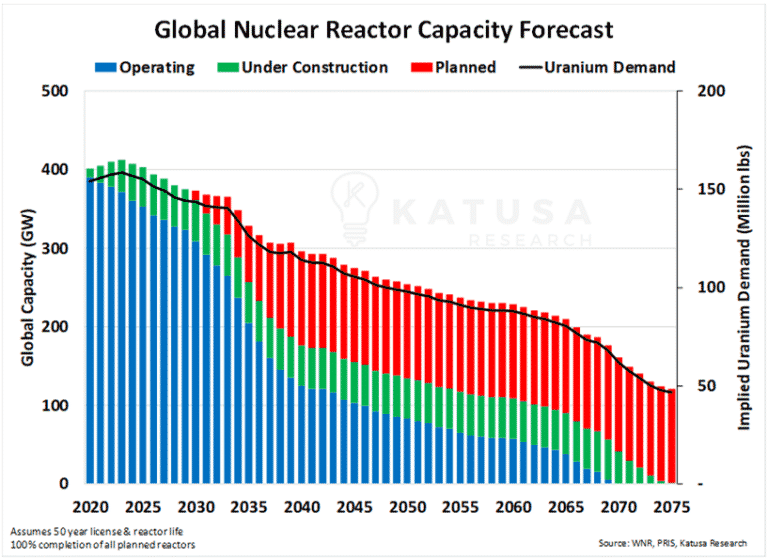 This is a very optimistic chart as it assumes all “planned” reactors that are not funded or permitted actually get funded and permitted and built.

Unless further reactors are announced, the nuclear energy sector will be using much less uranium in 25 years than it does today.

Nuclear power does not produce direct carbon emissions like their fossil-fuel counterparts.

For that, it’s getting a lot of attention to be the next big “green fuel”.

Now, if nuclear gets accepted as a zero-carbon solution to the Green Dream, massive government stimulus can change the destiny of the nuclear sector.

Otherwise, the upfront costs of existing technology for generators is too steep for private industry to tackle.

The uranium markets are moving fast and we are staking positions in the best companies that will do very well in the next uranium bull cycle.

I have just recorded a uranium webinar with CEO’s of some of the largest uranium producers in the world to peel back the curtain for you on this secretive industry.

These are CEOs of companies who control some of the largest producing uranium assets in the world with production over 10 Million pounds annually.