Jeffrey Gundlach, CEO of DoubleLine Capital LP (DoubleLine®), noted in his 2017 forecast that the copper-to-gold ratio was a "fantastic" indicator of interest rates – specifically the yield on the benchmark U.S. 10-year U.S. Treasury. I have since written numerous Kitco News commentaries on this indicator which has proven to be a forecasting gift that keeps on giving (last commentary: Is Jeffrey Gundlach right about copper, gold &amp; interest rates? , Dec. 23, 2019, Kitco News)

Monitoring the stability of the copper-gold ratio (CGR) can enhance the interpretation of this indicator. In volatile markets, stability analysis can anticipate highs and lows of the CGR and a change in direction for yields. For less volatile conditions, a stable CGR can portend periods of low yield volatility.

We have seen unprecedented market upheaval since last summer, initially due to U.S./China trade tension followed by the novel coronavirus (covid-19) pandemic. CGR stability analysis provides valuable clues for what happens next.

The Dog Days of Summer 2019 started out quiet enough. The 1-month volatilities of the copper-gold ratio and U.S. 10-year Treasury yields were both comfortably below their 8-year averages as July sleepily rolled into August. Then the barking began.

Nine months since, gold has taken a spirited run at $1,800 swinging $380 per ounce peak-to-trough; copper prices fell briefly below $2 in March with a $0.75 per pound spread between extremes. On a comparative basis, by early-April a troy ounce of gold could buy 44% more pounds of the red metal than July last year. The copper-gold ratio fell below levels last seen during the 2007-2009 financial crisis. Interest rates jumped off the porch too. The 10-year yield dozed comfortably above 2% in July to land 54 basis points above ground zero last week. A period of extreme, perhaps historic, volatility.

But here’s a funny thing – although the CBOE Volatility Index (VIX) has remained above 30 since February 27, by Friday’s close the 1-month volatilities of both copper-gold and 10-year yields have returned below long-term averages. Quiet on that porch at least.

The market forces that caused this period of market turmoil began with the U.S./China trade negotiations heating up last summer then cooling in a compromise Phase I Deal by mid-January. As the boil came off that conflict, covid-19 spread beyond China’s borders. It proved to be a deadly viral infection not only for humans but for the global economy.

Will the present tranquility of the CGR and 10-year yields be sustained or is another round of volatility before us? Ratio stability analysis can help answer this question but first let’s examine the last nine months using a powerful market indicator.

The China 2-rho Divergence Indicator© has three China-sensitive inputs: copper price, gold price and the Chinese yuan. As explained in the referenced column, the indicator measures divergence between copper-gold and yuan-gold correlations over short- and longer-term time periods. Typically, a low number affirms expectations based on past history, mid-range values above the 5-year average signal impending departures from the norm, and a measure greater than 1.95 is a red flag for extreme divergence.

Figure 1 shows the China indicator from September 2017 through Friday’s close, April 24, 2020. In 2019, U.S./China trade tensions (A) caused two periods of extreme divergence (>1.95) as market participants grew increasingly concerned about the impact on world trade. By January 10, the signing of the Phase I Deal appeared quite likely. Divergence dropped to 0.301, well below the 5-year average of 0.79, and the deal was signed January 15.

However, the grip of covid-19 (B) made this moment of market tranquility brief as the indicator raced again towards extreme divergence. By February 11, divergence stalled at 1.840 as draconian isolation policies curbed the viral spread from Hubei Province. The Chinese mitigation scheme worked and the indicator retreated from extremes. Even though the rest of the world still wrestles with covid-19, the indicator is now trending towards the long-term average (green arrow) suggesting stabilization of the Chinese economy.

Jeffrey Mayberry, Co-Portfolio Manager of the DoubleLine® Strategic Commodity Fund, has studied the relationship of the copper-gold ratio and 10-year Treasury yields and makes this important observation:

The ratio’s absolute level is irrelevant. What matters is its direction – and whether the yield on the 10-year Treasury moved in the same direction or diverged. In past episodes of divergence, the 10-year yield has eventually tended to follow suit of copper-gold (“The Power of Copper-Gold: A Leading Indicator for the 10-year Treasury Yield,” Jeffrey Mayberry, DoubleLine® Funds)

A stability map, or lambda-Map©, of a commodity ratio experiencing high volatility is useful to divine directional change and anticipate a local extremum (maximum or minimum) of the ratio. Following Mr. Mayberry’s observation, this same technique applied to copper and gold prices should presage a directional change in the 10-year Treasury yield as well as the CGR.

Realized volatility is an excellent metric for analyzing the stability of market valuations like the CGR. Expressed as a percentage, it is the standard deviation of the ratio normalized by its mean over a fixed time period. Fig. 2 is the 3-month (Y-axis) and 1-month (X-axis) realized volatilities of the CGR. A stability trajectory for two cases sequentially connects the market-day data points of the lambda-Map©. 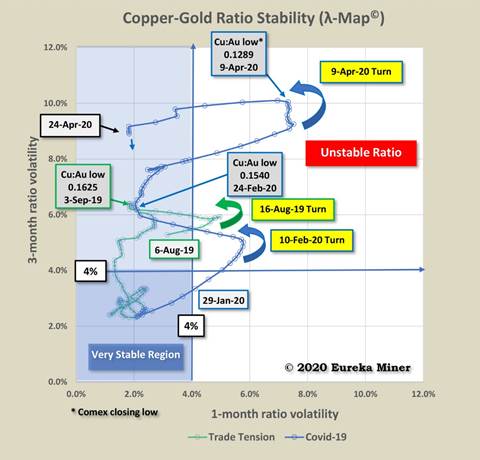 A 13-year history of CGR volatilities indicates that 50% of the time, 1- and 3-month volatilities are less than 4%. Accordingly, we say the ratio is stable when volatilities of both time bases are less than this limit. Beyond these limits, the ratio can decrease (increase) rapidly as gold and copper prices move in opposite directions. This can occur during “risk-off” market stress when gold is rising and copper is falling or “risk-on” market exuberance (gold falling, copper rising).

Such turns in the upper-right quadrant are key. In this case, the turn anticipates a low in the CGR by 11 market-days (September 3, 2019). After this low, stability steadily improves from both a short- and longer-term basis until the trajectory enters the “very stable” lower-left quadrant (shaded a darker blue).

The covid-19 trajectory (blue) starts January 10 in very stable territory but leaves the LHP on January 29. It quickly heads for the unstable upper-right quadrant making a counter-clockwise turn February 10 (large blue arrow). A new low in the CGR occurs 9 market-days later on February 24 with a return to the LHP.

However, this new found stability erodes and the blue trajectory returns to the unstable region. A second counterclockwise turn forms somewhat haltingly but the trajectory eventually goes in the direction of the stable LHP on April 9. For this case, the new low for the CGR is coincident with that turn. Presently, stability is comfortably inside the LHP heading in the direction of the very stable lower-left quadrant (blue arrow).

What do these three turns signal for Treasury yield lows and volatility?

Figure 3 is a time history of the 10-year Treasury yield and copper-gold ratio volatilities from July 30, 2019 to last Friday’s close. 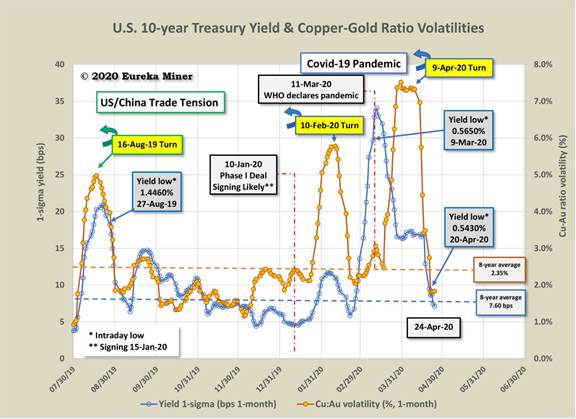 Yield volatility for this analysis is taken as the rolling standard deviation of yields over a 1-month period expressed in basis points (bps). For reference, the 8-year average for such a volatility measure is 7.60 bps. The 1-month CGR volatility of Figure 3 is the same as the X-axis of Figure 2. The 8-year average is 2.35%.

As market anxiety increased in early August, yield volatility (blue trace) increases from a below-average 4.6 bps to over 20 bps by the August 16 stability turn. Notably this is during a period of increasing positive correlation between yields and the CGR. Past the turn, volatility decreases and yields make a low August 27 (1.4660% intraday), 12 market-days after the turn. Volatility then oscillates with declining peaks and troughs. It eventually falls well below the long-term average by January 10, the dividing line between trade tensions and covid-19 impacts.

After January 10, yields trend higher. There is a new peak in CGR volatility (orange trace) marking the turn of February 10. This leads a second peak in volatility rising to nearly 35 bps – considerably higher than the first peak. Interestingly, this maximum occurs one day after the World Health Organization (WHO) declares covid-19 a pandemic on March 11. Just prior to this on March 9, yields make a new intraday low of 0.5650% roughly one month after the February turn.

Finally, a third peak and turn in CGR volatility happens April 9 followed by a collapse of both CGR and yield volatilities. Yields plumb a bottom on April 20 of 0.5430%, 6 market-days after the peak. By Friday’s close both volatilities are once again below their 8-year averages.

For the three cases discussed, major turns in the copper-gold stability trajectory have led CGR lows twice and been coincident once (Figure 2). Turns in all cases have anticipated lows in the 10-year Treasury yield (Figure 3). All three turns occurred in a high volatility, “risk-off” environment with the stability trajectory in the unstable upper-right quadrant.

Importantly, Figure 3 also suggests that when conditions of low volatility do occur, they happen concurrently for the ratio and for yields. Putting these behaviors together makes tracking the copper-gold stability key to anticipating directional change of interest rates, anticipation of their extremes as well as periods of low volatility.

As the covid-19 saga unfolds further, a copper-gold stability trajectory that moves into the very stable quadrant would be very good news as it was for the interim resolution of U.S./China trade tensions. However, if the trajectory re-enters the unstable quadrant more market chaos should be expected. A major counter-clockwise turn would then be the signal for a return to more normal conditions.

Hats off again to the DoubleLine® team for discovering this important market indicator with proven performance in troubled markets. Copper-gold stability analysis enhances the interpretation of that indicator for both high and low volatility situations. The market events since last summer provide ample testament to the power of that dual relationship.