Gold has always been the world’s favorite safe haven. This has been true for thousands of years, and it’s especially true today.

During these unprecedented times, gold is again showing its true colors… It’s strong and bullish. It’s near a seven-year high and all signs indicate it’s headed a lot higher. In fact, we believe the upside for gold will be wide open in the upcoming years.

Currently, gold is on its way to the 2011 highs above $1900. And if gold now stays above $l680, this target could be reached sooner rather than later. After that, it’ll then likely skyrocket.

There are basically three major reasons why and they’ve all joined together to form the perfect storm.

First, there’s been a massive debt build up all over the world. This was already very serious, way before the coronavirus news started making headlines. But since then, emergency financing has soared worldwide.

The Fed, for instance, has been printing money like mad. And other countries have been doing the same.

This will all end up fueling big inflation down the road. As the great Richard Russell used to say, inflate or die, and we're clearly in an inflate or die situation.

That’s because the world’s central banks feel they must do whatever it takes to keep the economy from falling apart. And if inflation is the end result, they’ll worry about that later.

For now, coronavirus and its economic effects are the big concern. This is a major event and it’s something that hasn’t happened since the Spanish Flu in 1918. 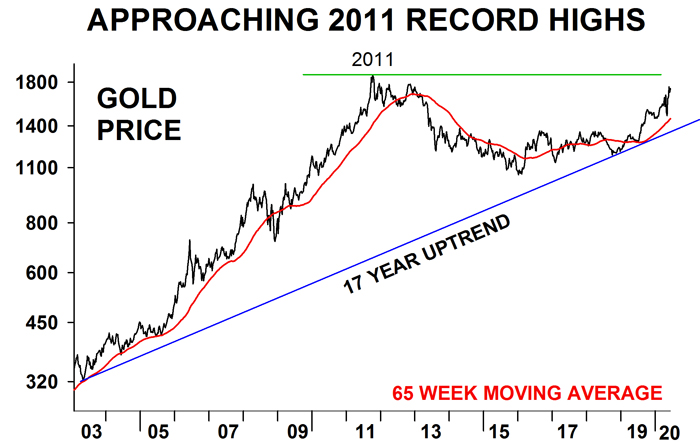 All of these repercussions are going to be very bullish for gold, especially considering this perfect storm we’ve entered. It’s going to change many things.

Most important, it will become increasingly obvious that gold is one solid way to protect yourself and your wealth. Gold is now in a very special situation.

Sure it’ll probably be volatile at times as the pandemic evolves, but look at this as a time to get set for the really big major rise that’s still to come. In other words, buy on weakness. We think you’ll be very glad you did. And if you already have gold, keep it and enjoy the ride.