This week's title is a no-brainer given last week's was "Gold Battles for The Northern Front (1750-1800)". Simply stated, after Gold's multiple battles across the prior three weeks in attempting to take The Northern Front, this most recent week found price in full retreat, trading no higher than 1746 and indeed to as low as 1676 before settling yesterday (Friday) at 1710. So much for acknowledging the StateSide money supply as measured by "M2" having risen through the $17 trillion level, a record-setting (since at least 1980) year-over-year increase of +19.3%. Putting that in perspective, from 1980 through 2019, the average year-over-year increase in M2 was +5.9% -- so now we're at better than triple that rate.

By comparison, Gold year-over-over is +34.5%, the Big But there being Gold's annual year-over-year change from 1980 through 2019 at just +3.6% pales to the debasement rate of "M2". Hence the stark disparity between price and debasement valuation in the above Gold Scoreboard.

More glaringly, Gold isn't soaring as everyone expects it to do given the unconscionable creation of faux dough both monetarily and fiscally. And yet this past Tuesday we wrote to a colleague across the pond that yours truly "...may be the sole analyst who has consistently suggested for months that Gold could get repeatedly repelled in these 1700s..." in spite of our citing throughout just how diabolically undervalued price is simply by Dollar debasement. But you know what they say: you can't have it both ways. So whilst technically Gold (given its falling from the overhead resistance) is going the right way, 'tis fundamentally (given the massive proliferation of money) going the wrong way.

For not the first time, Gold is reminding us of famed Minnesota Vikings' defensive end Jim Marshall, who in 1964 here at Kezar Stadium recovered a fumble against the San Francisco 49ers and scampered 66 yards for what he thought was a touchdown ... 'cept that 'twas a 49ers'-favourable safety as he ran the wrong way. Analogous to Gold, score one for the Shorts. Sheesh!

As for Gold's attempt to repeat its 2011 pace from 1700 to its All-Time High of 1923, plainly 'tis not happening as we again update the following graphic with just two trading days remaining (per the right-hand panel) to make it happen, this down trend of late obviously being the wrong way:

"But mmb, you always say the markets are never wrong..."

True enough, Squire: price is what 'tis, period. But were there no perception for future direction, we'd have no markets. And Gold -- by its time-tested track for nearly fifty years as the natural store of value to its otherwise being disintegrated by the 3Ds of Debasement, Debt and Derivatives -- is clearly behind the curve. Gold's price today of 1710 is not wrong as 'tis to where the trading community has placed it. However: we may say that price having gone in the last 7 trading days from 1764 down to 1676 just yesterday -- given that Gold "ought be" 3368 today -- is directionally heading the wrong way.

A bit more broadly of course, Gold is going the right way, this year now being four months old plus one trading day in May. Indeed thus far through this year's 84 trading days, we find Gold +12.5% all told, bettered only by the price of the U.S. Treasury Bond +16.6% as we turn to the year-to-date standings for the BEGOS Markets. Note therein the S&P 500's mirror-change of -12.4% to Gold, and sadly that Sister Silver in donning her industrial metal jacket (instead of her precious metal pinstripes) has teamed up 100% with Cousin Copper, the two down -15.8% and -17.5% respectively. (But then there's Oil...):

Moreover as mentioned, Gold's year-over-year performance is +34.5% as we next see via the weekly bars, even as price has recently reverted back down to our 1675 forecast high for 2020. One has to wonder where price would instead be today had COVID 19 not made the scene: note the lurch lower from Gold first having reached 1675 (24 February) to as low as 1451 (16 March). As we've mused in the past, Gold could sadly take off upon something going terribly wrong ... and we've been witnessing it, Dollar debasement nonetheless in stride. As for the highlighted Gold/Silver ratio at the foot of the graphic, 113.5x is 73% above the 2001-to-date average of 65.6x. Have we forgotten that Silver, like Gold, is money? Can the French word "argent" no longer be viably translated to equally mean money and Silver? Sacrés chats! 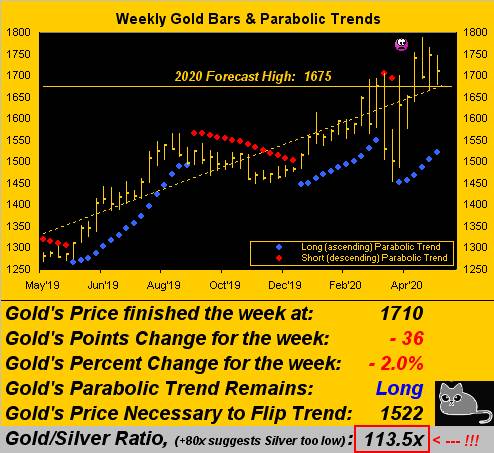 It being month's end plus one May trading day let's look, too, at Gold's year-over-year percentage track along with several of the key Precious Metals equities, namely (replete with drum-roll and trumpet fanfare): Franco-Nevada (FNV) +97%, Newmont (NEM) +88%, Pan American Silver (PAAS) +76%, the VanEck Vectors Gold Miners exchange-traded fund (GDX) +60%, Agnico Eagle Mines (AEM) +53%, Gold itself +34%, and the Global X Silver Miners exchange-traded fund (SIL) +32%. And what a wallapalooza alone was the month of April! Leverage, baby!

But from wallapalooza to worst-of-the-loozas continues the Economic Barometer, with further ghastly fallout still in the balance, the most painful of the incoming metrics certainly being StateSide Jobless Claims, its six-week total now topping 30 million which is 18% of the defined "labor force": that's one out of five folks having been laid off. And most of the overall incoming Econ Baro data of late is relative to March rather than the imminent carnage still to be reported for April. Note therein as well the S&P 500 (red line): it fully completed the heralded "Golden Ratio" upside retracement (from March's low back up toward February's high) this past Wednesday, on cue then turning tail back down. As for Q1 Earnings Season, with 254 of the S&P's 500 constituents having reported, 64% have beaten the marketing tool known as "estimates", but only 46% have actually bettered shareholders' bottom lines. Here's the Baro:

Meanwhile from the "Alphabet Soup of Economic Bottoms Dept.", speculation abounds as if the economy's rebound shall take the shape of a "V" (our inkling, but with a bit of a skew), a "U" (certainly the popular view), a "W" (a neo-variation of the prior two), or something yet bumpier upon which to chew (per Federal Reserve Chair Powell's purview). We were certainly encouraged to hear in a recent morning's wee hours via Bloomy radio an interviewee from the BlackRock Investment Institute confidently calling for a "V" ... we'll see. Given the hard economic fallout to really hit home during April/May, as businesses begin to then gear back up, those two months may in hindsight prove to have been the trough.

But giving the appearance of falling into the trough at present are our "Baby Blues" for the precious metals. Here in the two-panel chart of daily bars for the last three months-to-date for Gold on the left and Silver on the right, the dots in both cases are in accelerative fall. 'Course it makes no fundamental sense for them to fall at all in luring price lower. But to this point, technical overhead resistance has time and again thwarted Gold's attempting to take The Northern Front (1750-1800), and now the declining blue dots are taking their technical opportunity in at least forecasting price further fallout:

Next we've the two-panel display of the precious metals' 10-day Market Profiles, price in both cases having slipped below the mid-point. For Gold (below left) its nearest overhead trading resistor is also the most commonly traded price of the past fortnight: 1713. And for woefully, lowly Sister Silver (below right), her weekly settle of 15.07 sees her most dominant trading resistor at 15.45:

To wrap it up with four months (and the economy) now gone in 2020, here we've the chart of Gold's Structure by its monthly bars since 2011. Standing stark is price's foray into The Northern Front only to then fall toward the wee rightmost nub which is the single trading day thus far for May. These days, ever back "on maneuvers..." is our Gold: 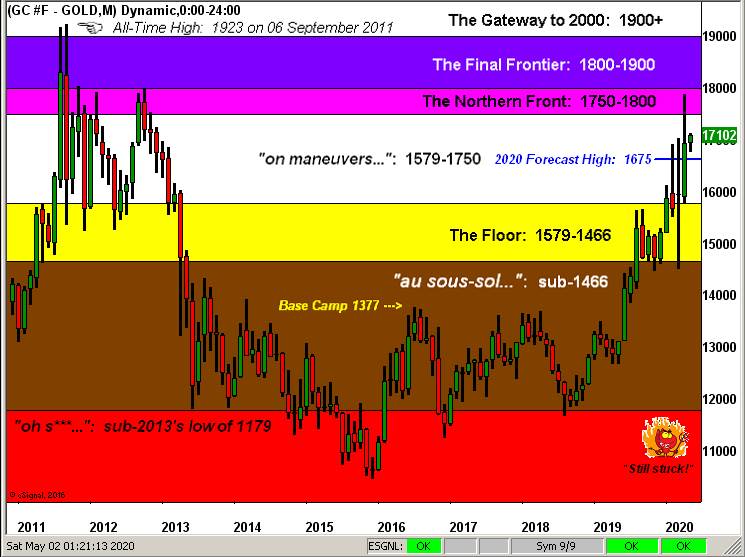 14 metrics hit the Econ Baro this past week; another 14 are poised to clobber the Baro in the new week, culminating next Friday with the worst single month's payrolls loss in our lifetime. Tough times for so many, to be sure, both here and 'round the world. And yet as you, too, can sense, economies may be near bottoming as the human spirit of "Where there's a will there's a way" comes back into play. Nevertheless as we're wont to say: "Health before wealth", for the latter is worthless without the former. Let your wings not fold, mind your Gold and 'twill all be righted as the weeks unfold! 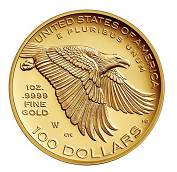