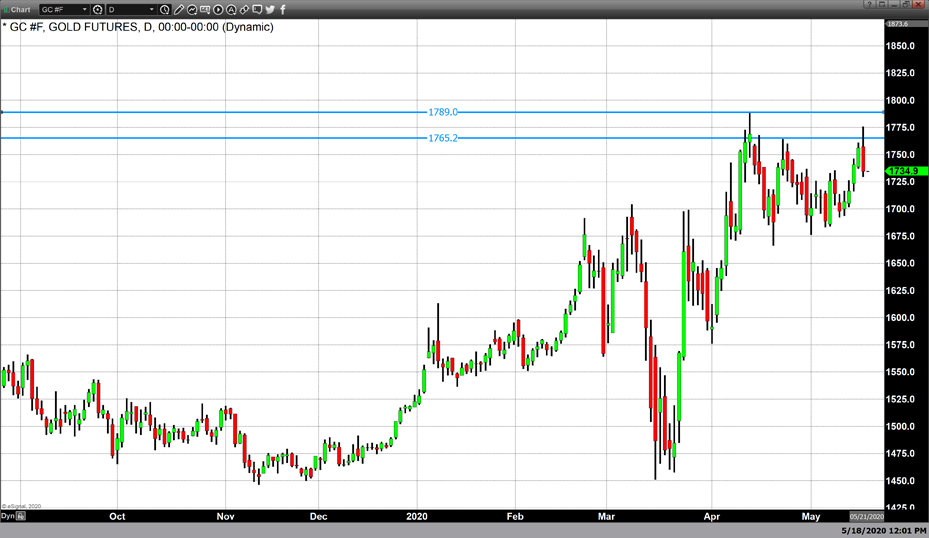 This dramatic selloff comes after a much firmer gold price which occurred overseas in Australia, Hong Kong and London. Once gold futures opened in New York this morning news emerged that that a biotech company called Moderna Inc. has developed a trial vaccine which is now in phase 1. It was developed to neutralize antibodies, and has shown promising results, in essence speeding up the process of creating a vaccine into the next phase of clinical testing.

They also mentioned that Moderna is fine-tuning the medication so that it can begin a trial design for a phase 2 study.

One interesting aspect of the drug is that it was given to eight participants taking two of the three lower dosing levels and reported the same or higher levels of neutralizing antibodies in blood samples gathered by patients who have recovered from COVID-19. There were adverse reactions by participants taking the higher doses of the vaccine by four test subjects that reported severe skin reactions.

If their phase 2 trials are successful Moderna plans to launch a phase 3 trial beginning in July.

Brien Lundin, editor of Gold Newsletter said, “After a torrid run higher in the first half of April, gold spent the next few weeks digesting those gains by trading sideways in an ever-tightening pattern. This pattern indicated a looming breakout, and that’s just what we got late last week as gold powered through upside resistance on Thursday and Friday.”