The hard truth remains, economic stimulus continues to be needed as both the Federal Reserve through their monetary policy, and the U.S. Treasury through fiscal policies has ballooned, and more stimulus will likely will be needed.

Today the minutes from the April FOMC meeting were released. They indicated that Federal Reserve members discussed being more transparent in regards to their future direction of interest rates. The Fed minutes coupled with yesterday’s testimony by Chairman Powell and Secretary of the Treasury Stephen Mnuchin continue to be highly supportive of gold prices.

The testimony along with the report by the Congressional Oversight Commission underscored the vast amount of monetary expenditures in response to the pandemic that has rocked the world on two fronts.

First is the effect on millions of individuals who have contracted the disease. According to BBC News the total number of cases of the Covid-19 virus currently stands at 4,891,785, and the death toll is currently at 324,496. The United States has reported that the total number of infected individuals now stands at 1,529,123, of which 91,992 souls lost their lives in the United States due to the pandemic. 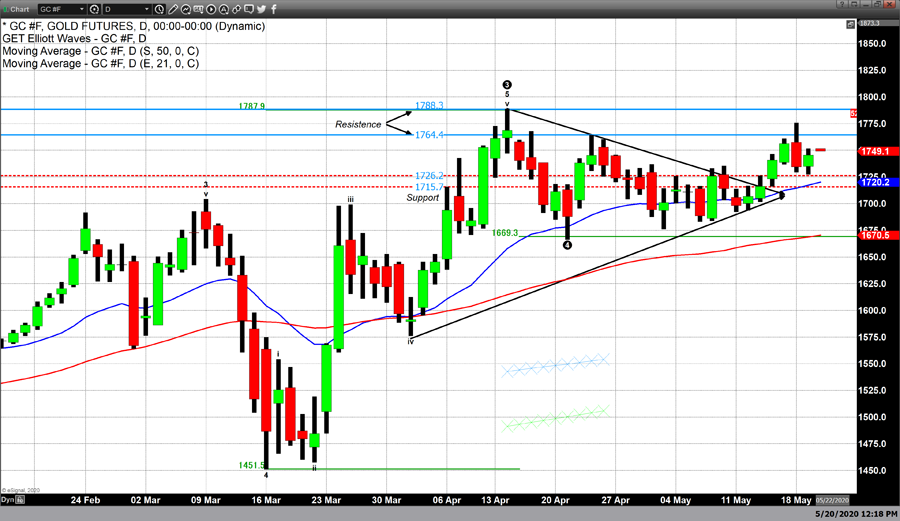 The second effect is the economic repercussions because of the pandemic. At the onset of the pandemic it was reported more than 90% of the United States population was under mandatory lockdown. However, across the country, on a state-by-state basis, many states are now relaxing their stay-at-home orders, and our allowing certain businesses on a limited basis to begin to reopen.

Whether or not the move to relax the stay-at-home order or the reopening of businesses will ignite a second wave of new cases in the pandemic is unknown. However regardless of when this pandemic concludes, the economic repercussions have caused the world to face the worst recession since the Great Depression of the 1930s.

According to the International Monetary Fund the global economy will contract by at least 3% this year. According to the IMF’s chief economist, Gita Gopinath, “the crisis could knock $9 trillion (£7.2 trillion) off global GDP over the next two years.”

In other words, even after the pandemic has run its course the economic implications will continue to affect economies globally for years to come.

Gold has now gained value for six of the last seven trading days. With the exception of Monday’s strong decline, gold prices have shown gains since May 11th, when gold was trading at approximately $1700 per ounce. As of 4:05 PM EST gold futures basis the most active June contract is currently trading up $5.50, and fixed at $1751.10. That is approximately a $50 gain since May 11th.

Wishing you as always good trading and good health