Gold and U.S. equities continue to run in tandem, but to the downside today 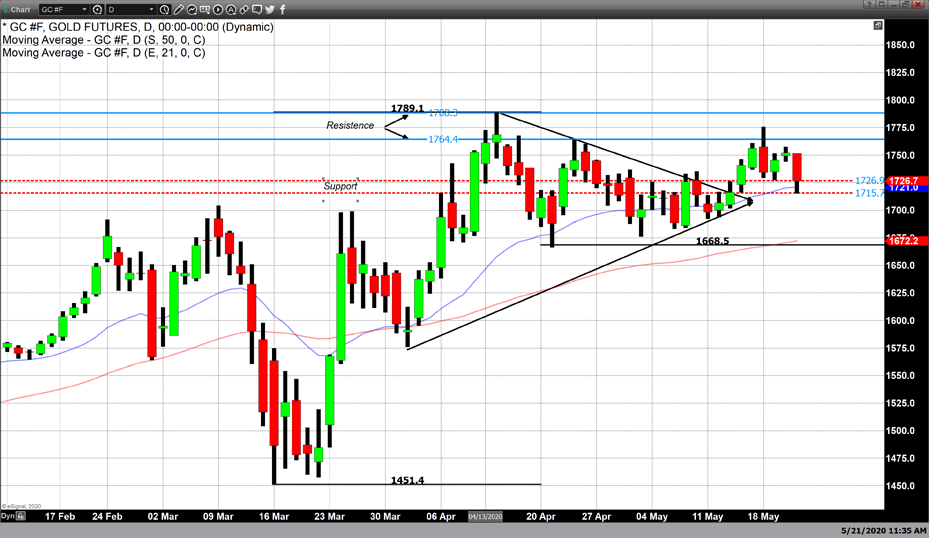 Today’s dynamic selloff in the precious metals was partially due to dollar strength. However, it was only minimal when compared to the total percentage decline of each precious metal. The dollar index traded 0.27% higher and is currently fixed at 99.40.

Spot gold is a perfect example of the minimal effect that a stronger dollar had today. According to the KGX (Kitco gold index) physical gold is currently fixed at $1727.50. Today’s decline totals $20.90 of which $16.70 is directly attributable to traders selling the precious yellow metal. Dollar strength accounted for the additional drawdown of just $4.20.

It is noteworthy that both precious metals as well as the U.S. equities markets moved in tandem again, but in today’s case they both moved in tandem to lower pricing. While the typical correlation between these two asset classes is a negative correlation, there are instances when both equities and gold move in tandem to the upside.

This occurred in 2008 when the Federal Reserve began to speak about quantitative easing, and continued throughout the middle of 2011 as both gold and silver both moved higher. In a similar manner we have seen both equities and gold run in tandem after the Federal Reserve began its more accommodative stance and reignited quantitative easing, after lowering their interest rates to near zero.

Today U.S. economic data on the number of Americans that applied for unemployment totaled 4.4 million, however on an adjusted basis first time unemployment insurance filing totaled 2.44 million. While this number is extremely unsettling based upon the prior six consecutive week’s numbers have been in decline, this according to the United States Labor Department statistics.