Oh say it ain't so, but is COVID already baked into the price of Gold?

"Preposterous!" you say, as do we. Just look above right at the U.S. Dollar's debasement spree, the Gold line running a far distant second in trying to catch up to the tall green tree.

And yet this past week Gold failed yet again -- this time in its third attempt -- to defeat the overhead resistance forces within The Northern Front (1750-1800). Price opened the week valiantly battling its way to the Front's midpoint at 1776 only to be repelled anew to as low as 1715 come Thursday toward settling out the week yesterday (Friday) at 1735. That is marginally below where Gold settled at 1740 six weeks ago, from when there's been lots of thrashing about to-and-fro. Comparatively back then, the U.S. Money Supply as measured by "M2" was $16.87 trillion: today 'tis 8.2% higher at $18.25 trillion. Fundamentally, Gold's lacking further upside "umph" seems diabolical. Technically, The Northern Front's resistance nonetheless remains ritual.

Our first mention of the word "coronavirus" in these missives was back on 25 January when 90% of the world had yet to hear of it and rather were focused on impeachment. We'd written as follows:

"...but is there a "virus" in the air? Sadly so, the Corona, don't you know. Yet once under control watch for market reversals to unfold ... 'Tis the near-term technical suggestion for lower Gold ... countered by a Coronavirus instead kicking down stocks (already horribly over-valued in their own right)..."

Gold was then 1571, already up a nervous 3.4% for the year. As fears of COVID unfolded, Gold began scampering upward, achieving our year's forecast high of 1675 on 24 February only to fumble about for four weeks, falling to as low as 1451. But from that low on 16 March, Gold ran +23.3% up to the year's high at 1789 on 14 April as the monetary printing tumblers whirled and spendthrift fiscal policies unfurled.

Yet, had coronavirus never appeared, price by today may still have merrily made its way up to 1675 ... an applaudable run ... and then for this year be done with the economy still basking in the sun. Indeed one wonders: was that run of +338 points therefore the safe-haven baking of COVID and the attendant currency debasement into the Gold cake? Such notion seems senseless, but as we regularly say, the market is never wrong despite one's common sense thinking that price today ought well be up through The Northern Front and beyond.

Further per Gold's weekly bars from a year ago-to-date, we see across the past six weeks price essentially being stuck in a rather wide -- and at the same time somewhat scrunched -- range. Four of last six weeks have actually been net down, yet the most recent four have all recorded "higher lows". As you ad nauseam know, Gold has now made three failed forays for an upside breakout across the Northern Front, (i.e. up to and through the top of the following chart). The line denoting our forecast high for this year of 1675 clearly shows as having first been resistive (per the two red parabolic Short dots), and then -- COVID-coerced -- having morphed into being supportive. But should 1675 bust, one can make the case for Gold returning to 1600 before seeing 1800. 'Tis what markets do when all expect the opposite to ensue: 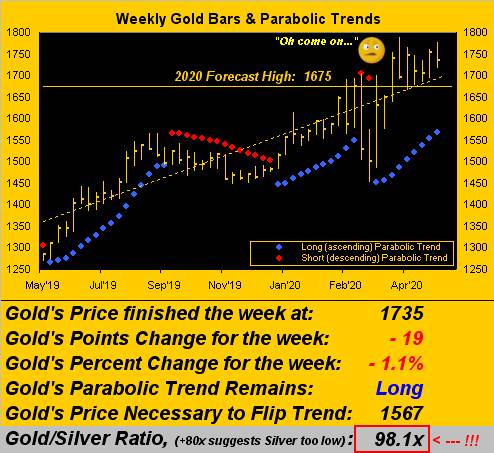 Similarly when it comes to the economy, not all are expecting it to recover via a so-called "vee" bottom, or as we've put forth, a "vee" with a right-hand skew, as 'twill rise but at a slower rate, just as markets do following a swift fall. Yet in turning to our Economic Barometer, as written in Friday's Prescient Commentary, not only do we see the Baro having recorded its first up week in the past six, but the bounce is that of a "vee" with a right-hand skew. So: is that it? We shan't rule out that 'tis, however: we've still a bevy of weeks to run with incoming data based on April and May metrics. To the extent that those poor reports indicate conditions worsening at a slower rate, are not as bad as expected, and get some benevolent revisions, conceivably what is shown below may appear in hindsight as the "vee" low for Econ Baro. But of more immediate interest, one might query as to why the Baro just kinked up whatsoever.

Well, friend Squire, going inside the numbers from reports of the week just past, we find the National Association of Home Builders Housing Index actually rose for May from April's reading of 30, well up through the consensus of 34, and on to the level of 37. Building Permits for April were more than expected whilst those for March were revised higher, even as shutdowns had begun to ensue. As well, The Conference Board's Leading Economic Index did not drop as much as forecast for April, nor nearly as much as it did in March. The past week's number of first-time Jobless Claims remained horrid in excess of two million, but the prior week's data was revised lower by 300,000 less claims. To be sure, negative is negative, but remember that the Econ Baro is oscillative. Indeed one may harken back to the phrase "Things are getting worse more slowly" ... et voilà we've a wee "vee":

In the midst of all this mist, Federal Reserve Chair Powell inferred incoming medical metrics to be more important than those economic, with financial government assistance paramount throughout. Still, hearing the drone of vehicle industry assembly lines coming back to life in the new week is a welcome sound indeed. That noted, 'tis shocking to see the company that "puts you in the driver's seat"-- the timeless Hertz -- is filing for bankruptcy protection. In a similar vein across the pond, Rolls Royce -- which in recent years has kept one more aloft rather than on the road -- is reducing its workforce by 20% and curtailing its dividend. The mighty Rolls: a phantom of its former self whilst elsewhere on the island, the Bank of England just issued its first below-zero-yield bond. Indeed a Dickensian hard row to hoe. At the same time, we enjoyed hearing Giuseppe Conte's common sense comment that by waiting for a COVID vaccine "...[Italy] would end up with a strongly damaged economic and social structure..." The prime minister could win a few StateSide governorships on that. As well, 'twas put forth this past week in France on Sud Radio: "Liberté avant securité". The westernized world is getting rightly rambunctious.

Rather rambunctious, too, is the relationship between Gold and the S&P 500. Here are the tracks of their respective percentage changes from 21 days (one month ago)-to-date, Gold being -0.8% and the S&P +4.1%. To be sure Gold is becoming fraught with frustration in not furthering itself up through The Northern Front. But neither was the just-completed Q1 Earnings Season any better off for the S&P: of its 450 constituents reporting within that calendar timeframe, 64% "beat estimates", but only a reciprocal 46% actually made more money over Q1 of a year ago. 'Twas the S&P's worst Earnings Season since Q3 of 2009 ... and we ain't yet seen this year's Q2:

Next we've a triumvirate of three safe-haven currencies, namely Gold, Silver and the Swiss Franc. (That's right, Mel, we deem all three as money). And for each is the familiar two-panel display of their daily bars and baby blue dots of linear regression trend consistency from three months ago-to-date on the left, and 10-day Market Profiles depicting the prices transacting the most contract volume on the right.

Specific to Gold, 'tis best described as firm-to-neutral. Clearly price is up, but at the same time stuck, even the face of all that debasing Dollar dissemination. Again we query: is COVID priced into Gold?

Sister Silver remains the Star, and yet she's still so below the comparative bar. As noted in last Monday's Prescient Commentary, the Gold/Silver ratio finally fell sub-100x for the first time since 12 March. But even today at 98.1x, 'tis ever so far above the 2001-to-date average of 65.7x (by which Silver today would be 26.38 rather than 17.69):

And there's the modern-day non-metal "currency-of-currencies", the ever-stalwart Swiss Franc. We remember buying one for 25¢ back in '72. Today 'tis $1.03. "Yes, we'd like to share a one-fourth's serving of your excellent Schilthorn Platte, please." But of late the Swiss has been a bit of a safe-haven miss: 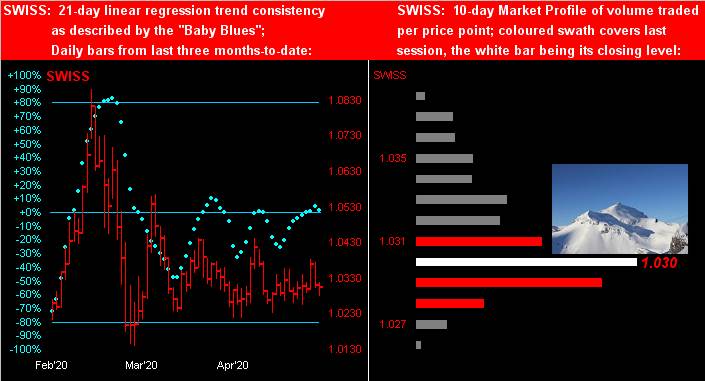 An appropriate question there, Squire, as rates drive toward zero. But if you peek at the website's Market Trends page, the Bond's graphic there is practically a carbon copy of the above image for the Swiss Franc. Moreover, any recent safe-haven play seems to have been left at bay.

The bottom line: there is anticipation in the markets that the worst economic effects from COVID either are passing, or shall soon so do, (notwithstanding a COVID wave two). Indeed, the venerable New York Stock Exchange is set to reopen its trading floor come Tuesday.

As for Gold, yes it may be stuck, lacking luck to take out The Northern Front (1750-1800). But you know, and we know, and everyone (to quote the late, great Jack Lemmon) "from Bangor, Maine to Honolulu" and right 'round the world knows: that Gold remains ever so undervalued, and Silver even more so! 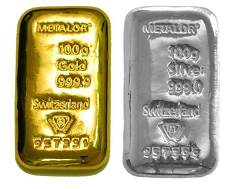