When the economic crisis hits, the first instinct is to analyze the previous catastrophes to learn what to expect from and how to handle the current calamity. So, not surprisingly, many analysts have already pointed to the 2008 global financial crisis (GFC) as the most relevant example. However, is really the current coronavirus recession similar to the Great Recession? Let’s compare these two big crises and draw investment conclusions for the gold market!

First of all, in terms of scale and pace of the decline, the current crisis is much broader and deeper. It hits practically the whole globe, not only advanced countries, and it affects all offline sectors, not just the financial sector and construction. And in just four weeks, 22 million of Americans made claims for the unemployment benefit. For comparison, during the Great Recession, 37 million unemployment claims were filed. But the Great Recession started in December 2007 and ended in June 2009, so it lasted one year and half. When it comes to output, the cumulative decline in the real GDP amounted to 4 percent during the Great Recession. Meanwhile, just two months of mitigation measures are estimated by some economists to shrink the real US GDP by 10 percent. Even the overly optimistic IMF expects that the US economy will shrink 5.9 percent this year.

Hence, the severity of the current crisis will be larger than the impact of the Great Recession. After all, it should not be surprising. The current crisis is not a normal economic crisis, but an economic lockdown, during which most people cannot work at full potential. It means that the current crisis is not a mere liquidity crisis, but a profit crisis – entrepreneurs cannot generate revenues, while they still have to bear some costs. Importantly, without profits, companies will lack funds for investments. It all suggests that the effect on the gold prices should be larger, especially since the response of the Fed has also been much more swift and aggressive.

Of course, there is one caveat, i.e., the duration of the crisis. The Great Recession lasted 18 months. But nobody knows how long the current crisis will take. If it is deep but short, the overall damage may not be as severe compared to the protracted depression. In such a scenario, the positive impact on the gold price might be limited, especially that investors are forward-looking and they can see across the valley. After all, the lockdown will be probably loosened in the coming weeks. However, it remains to be seen whether the crisis will be short. Although some measures may be lifted, we think that some social distancing will stay in place and the economy will not return to full capacity. And the Fed will not normalize its monetary policy in general and its interest rates in particular for a longer period of time, which should support the gold prices.

The nature of the coronavirus crisis is also different that the nature of the Great Recession. The latter is widely believed to be the financial shock that took a severe toll on the real economy. That’s not exactly the truth, as the financial sector got into trouble because of the housing bubble, i.e., the misallocation of resources within the real economy. But we could say that the initial hit was felt by the housing sector, then financial sector, and then the overall real economy because of the credit crunch. In other words, the banks which were engaged in subprime lending were severely hit, so they constrained lending for households and companies.

In contrast, the coronavirus crisis originated because of the health crisis and the response to it. Radical containment efforts produced a huge shock to the real economy, hurting mainly businesses and their workers. The financial sector has not been hit initially, although it may feel the negative effects in the second-round of effects. Why is this difference important? For two reasons.

First, it shows that the central banks are helpless against this crisis. Assuming that in 2008 we faced liquidity crises, the Fed could inject liquidity and alleviate the primary source of the problems. But now the Fed addresses only the a secondary financial repercussions, but it cannot deal with the primary shock to the real economy. This is something the gold bulls should rejoice. 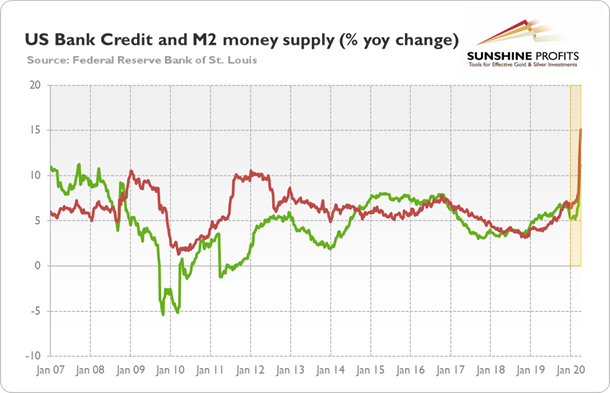 It means that stagflation is more likely now than during the Great Recession. Please note that we don’t claim that it will trigger stagflation for sure – after all, the negative demand shock is severe, while the high corporate debt may limit the demand for credit. However, as the majority of the money supply is created by commercial banks, the fact that this is not primarily a banking crisis, as it was during the Great Recession or during the Great Depression (when banks went under and we had deflation), increases the chances of stagflation (the expected spike in the public debt also increases odds of its monetization and the resulting inflation later in the future).

Moreover, the current crisis is not only the negative demand shock (as the GFC is considered to be), but also the negative supply shock, which creates some inflationary pressure. No need to say that stagflation seems to be a better scenario for gold prices than the case of low inflation or even deflation (although gold can shine even during such circumstances, as it showed in the aftermath of the Lehman Brothers’ collapse).

To sum up, generals always fight the last war, while the economist and central bankers always fight the last recession. However, the coronavirus crisis is different from the global financial crisis. So, central banks’ response may not help much. The former crisis is already worse than the latter. And because it results from negative supply shock as well as negative demand shock, while banks smoothly expand credit (so far), the current crisis could be more inflationary than the Great Recession. This is, of course, good news for gold, which is considered to be an inflation hedge.