How to navigate uncharted waters? A compass made of gold...

All the “off the charts” economic and financial data we’ve seen this year makes it blindingly obvious to any honest observer that investors are in uncharted waters. Employment, manufacturing, retail sales… in stat after stat, the shutdown of the global economy has broken the trends economists include in their models.

Just look at how exceptional the March meltdown—and subsequent recovery—is compared to other US market crashes. 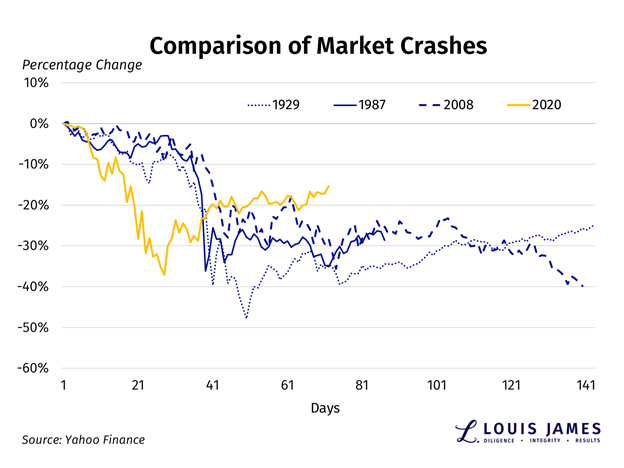 As you can see, the speed of the crash from top to bottom (so far) is the fastest on record. This fits with the events in the real world being a government-ordered shutdown. That’s quite different from a market deteriorating from internal causes, which normally takes time. Perhaps fittingly, the rapid rebound since the March bottom is equally unprecedented.

I could argue that speed of the collapse from record highs makes a record dead-cat bounce seem like par for the course. The truth is, however, that the Crash of 2020 is an outlier among outliers. There’s nothing quite like it to compare to. No one really knows what will happen next, and I refuse to pretend to.

Even the IMF has admitted that there are too many unknowns about COVID-19 for it to be modeled effectively—making their already gloomy models too optimistic.

This being the case, it strikes me as truly insane for Mr. Market to be chasing stocks higher on Wall Street.

I get that Amazon and Netflix are seen as COVID-19 trades, but do they really deserve the all-time high valuations they’ve achieved? Or Microsoft, Apple, Alphabet, and Tesla, which have come close?

In the face of what even the powers that be are admitting will be the worst recession since the Great Depression, this makes no sense.

It makes so little sense that even the talking heads on financial media I poke fun at from time to time are asking the same question. The list of famous investors who are sounding the alarm and calling for a retest of the March lows on Wall Street—if not an even larger meltdown—is getting so long, I can’t even call myself a contrarian for saying the same thing.

Mr. Market has shown a willingness to chase stocks on the slightest good news—and even on days when the news is off-the-charts bad.

How can that be?

All the easy money from Congress and the Fed (and other central banks), of course.

This is really not that surprising, when you think of the years and years of training investors have had that bad news is good news. And it isn’t just a baseless hope; they’ve seen that the Fed really does have their back.

If the Fed can buy junk bonds, then is there really such a thing as a risk asset?

Well… you and I know the answer is yes. But it’s apparently going to take Mr. Market a while to learn that there’s no escaping reality.

The relevant reality here is that an increasing divergence between what’s happening on Wall Street and Main Street is not sustainable.

If the fat cats on Wall Street are seen to be getting fatter while virtual soup kitchen lines stretch around the block, there will be change. Higher capital gains taxes, or financial transaction taxes… the means are already waiting in the wings. All that’s needed is the political will to implement them. That won’t be hard to come by when most of the population feels like occupying Wall Street.

Don’t forget that this is an election year—and H. L. Mencken’s definition of an election being an advance auction on stolen goods.

Note that I’m not predicting mass protests and a legislative intervention in stocks. I’m just saying that Wall Street and Main Street can’t go different ways for long without tearing the map. If things continue as they are, something will have to give.

The alternative would be a scenario in which the government-mandated recession really does end quickly. Perhaps not everyone, but most people would get back to work, and there would be no soup lines. The COVID-19 outbreak would become a one-off hit. The world would get back to growing from wherever it’s at when the shutdowns end.

Given the enormous amount of damage being done to businesses during the shutdown, I have to say that this quick recovery scenario strikes me as delusional.

Easy money won’t make frightened people want to go out to eat or sit by strangers on a plane or in a movie theater. It won’t bring back jobs in businesses that won’t work in an era of social distancing.

And that’s not to mention what happens when more companies realize that they don’t need to hire people in high-labor-cost jurisdictions to work in their offices. The same logic that enabled call centers in India could send all sorts of “knowledge work” to the lowest bidders globally. That could be great for emerging markets, but it would be devastating to the US and EU.

I could go on, but I’m sure you get the idea.

Thing is, as long-time readers may remember, I felt just as bearish after the Crash of 2008. And I was wrong—at least as far as mainstream equities goes. That makes me very reluctant to say that I know what will happen this time.

So, where does that leave us?

Still in uncharted waters, unfortunately—but not without a boat and navigation tools. The boat for bears like me is our capital, all that we’ve been able to raise while “going to cash and waiting for the smash.” The tools are our knowledge—not of the future, but of the lessons of the past, and the nature of the assets we’re interested in speculating on.

We need to proceed with caution, but we can, with a compass made of gold…

So far, my compass readings make one thing clear: whatever today’s unprecedented monetary and fiscal policies do to the economy and mainstream stocks, they are extremely bullish for monetary metals.

Note that I do still count silver as a monetary metal. I’ve no doubt that silver will follow its usual pattern of lagging gold and then more than catching up.

I have to say, however, that the lag this year could be quite long, given the powerful demand shock to silver’s industrial consumption.

On the other paw, this same factor could set up a perfect storm for silver. A large chunk of the world’s primary silver production was suspended for weeks in Peru and Mexico. Some of the big base-metal mines that produce most of the world’s silver could see lower output or be put on care and maintenance even after the COVID-19 shutdowns end, if the economic downturn lasts as long as I think it will. That could create a structural supply deficit for silver akin to the one palladium saw last year.

Hence my current portfolio and my shopping list focused on gold and silver plays in The Independent Speculator. It’s the surest basis for speculation I can think of today.

One key point I made there is that if I were very cautious and really couldn’t afford much risk in the years ahead, I’d stick with gold bullion for now.

Physical gold can’t go broke. It can’t be put out of production by a pandemic. It doesn’t become illiquid if my brokerage shuts down. The complete lack of counterparty risk makes it the safest way to put away some savings. Governments could try to confiscate it again, but by the time that happens, we should have been able to realize enormous profits and transfer them to other real assets.

Best of all, at this time, it’s also a way to speculate on the logical consequences of all the mad money-printing going on around the world—a speculation that could double or more before the dust settles.

P.S. To be kept abreast of more dangers, opportunities, and issues affecting investors, please sign up for our free, no-spam, weekly Speculator’s Digest.

What is the most valuable asset in space? Hint: it's not gold