All eyes on the HUI breakout invalidation!

The key technical development of this week in the precious metals market is HUI’s invalidation of the breakout above the 2016 highs. It will be particularly interesting to see where it closes the week, as an invalidation in weekly closing terms will be a crystal-clear bearish confirmation. 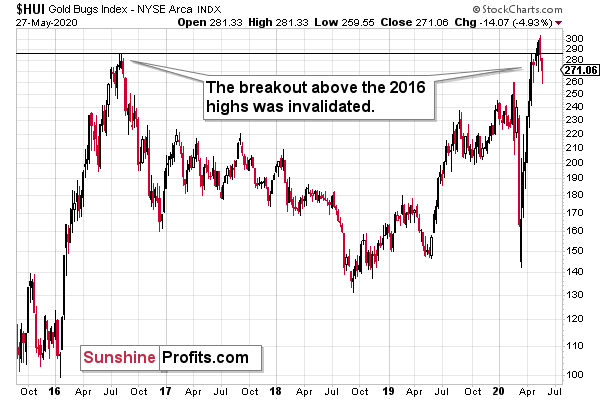 Gold miners reversed before the end of yesterday’s session, but they didn’t manage to take HUI back above the highest weekly close of 2016 – the 278.61 level. The HUI closed at 271.06.

On the daily chart, we see that a short-term breakdown is currently being confirmed. 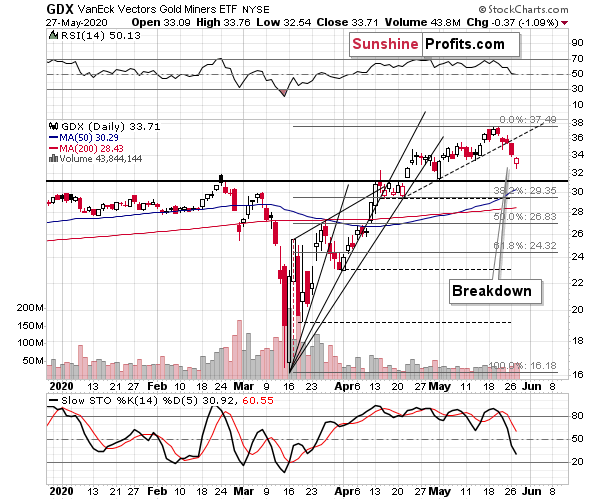 The GDX ETF moved below the rising support line based on the previous April and May lows and it closed there for two consecutive trading days. If the GDX closes below the rising dashed line once again today, the breakdown will be confirmed.

And based on gold’s 4-hour gold chart, it could be the case that the very short-term upswing that started yesterday, is already over. 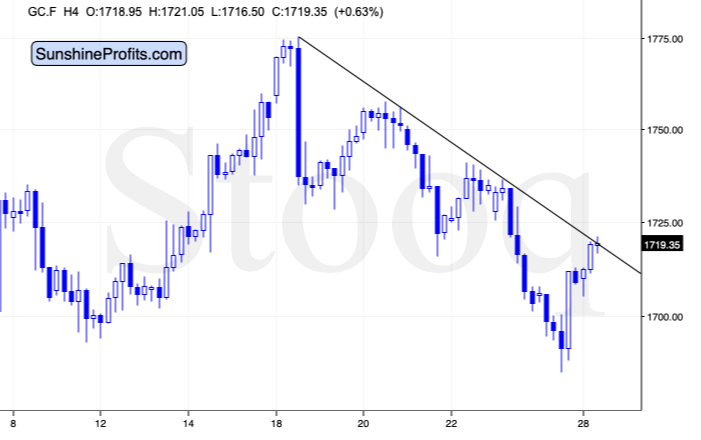 Gold approached its short-term declining resistance line, and it’s currently testing it. This line already held less than a week ago, so it favors lower prices at this time.

Of course, by the time you read this analysis, gold might already be after a breakout. In this case, we wouldn’t be surprised to see gold futures at about $1,740 or even $1,760 before the next decline takes place. Again, that is IF the breakout takes place, but the entire point of creating resistance lines for gold is to detect gold’s tops – places that are likely NOT to be broken. Or that are going to be broken, but then an invalidation will follow, leading to further declines. 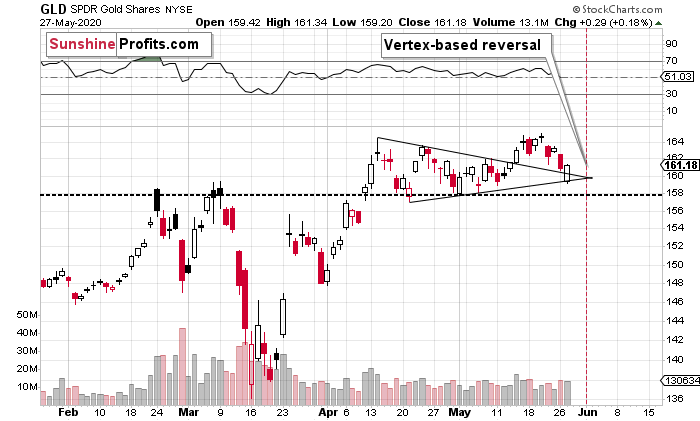 The GLD ETF bounced from the rising support line yesterday, and it then moved to the above-mentioned resistance line – that’s a relatively normal course of action. Based on HUI’s invalidation of the breakout above the 2016 high, it seems that the top is already in for gold and gold stocks, and the price action yesterday and today in gold doesn’t invalidate it.

And what can one forecast for silver? 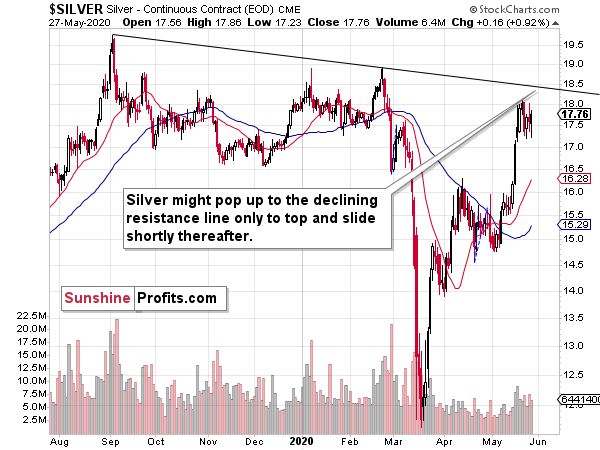 The white metal is still showing strength on a very short-term basis, which further confirms the toppy nature of the most recent price moves. Silver tends to outperform at the very end of a given upswing, so we could even see more of that phenomenon – especially if the stock market moves even higher from here.

Silver is known (at least it should be known) for its fakeouts. Silver often breaks above certain resistance levels, only to invalidate these breakouts shortly thereafter. If silver’s “breakout” is not accompanied by an analogous move in gold or miners, the odds are that it’s a fakeout. The odds increase further if this action was preceded by a rally.

Therefore, if silver moves higher from here, and even breaks to new May highs, it might not be a bullish development at all. It could be a fakeout that only takes the white metal to about $18.50 or so – the declining resistance line based on the previous highs – and then starts the next huge downleg. Please keep in mind that silver already launched one huge slide from almost $19 this year, so another big move lower from these levels could definitely take place.

All in all, it seems that we’re going to see one more sizable move lower in the precious metals market before they move much higher, and the odds are that the downswing has already begun or it’s going to start shortly.

Thank you for reading today’s free analysis. Please note that it’s just a small fraction of today’s full Gold & Silver Trading Alert. The latter includes multiple details, but most importantly, it includes the clear discussion of what will be the sign telling one that gold’s move lower is almost certainly completely over. That’s the detail, we think you might enjoy, want, and need right now.

What is the most valuable asset in space? Hint: it's not gold