The track of Gold's weekly closes in the above Scoreboard tells quite the tale of the tape: that Gold thus far this year has been unfit to defeat the overhead resistance forces of The Northern Front (1750-1800).

This in spite of Gold having in its corner as good a team for which could be asked, monetarily led by head trainer Jerry Jay Powell and his Dollar Debasement Dudes, with further coaching by Fiscal Fiasco, not to mention the expanding bussed-in unknowing fan base of Anarchists "R" Us. (In what bank is your safe deposit box?)

To be sure, Gold has lacked the nerve to as yet conquer The Northern Front when reasonably it ought well by now be in the rear-view mirror, the one-two Fed-supportive punch regarding COVID and Revolt missing Gold's due mark.

Hardly far from other analytical lines, we were privy yesterday (Friday) to a major investment bank's piece which opened as follows: "Gold rises sharply ... [week-over-week] to US$1,737...", indeed to where it settled out the week. 'Tis yet again ad nausea the same old reality of change being the illusion whereas price is the truth. Yep folks, Gold has risen sharply to the same old place 'tis basically been since early April: 1737. That's "unch" in our book. Again, you can see it in the above Scoreboard, and 'tis further made manifest below in the chart of Gold's weekly bars from a year ago-to-date:

We certainly shan't rule out yours (and others) very perceptive notion there, Squire. But given the aforementioned fundamentally Gold-positive events of the day (indeed of the year), one again queries, "Why is price here?" It seems as if one and all are jumping up-and-down about Gold ... and yet price is the only thing that is not jumping. Lack of nerve to hit overhead offers makes Gold reluctant to rally up through the ever-firm-to-date overhead resistance.

Meanwhile, continuing to grow a fresh new up limb is the Economic Barometer, albeit in contra-movement to the "It's All Good" S&P 500. Of the nine metrics that entered into the Baro this past week, seven improved over their prior period's report, a trend we expect to on balance continue into next week's collection for 12 further incoming data units. So break out the popcorn and enjoy the ride, even should the S&P (red line) further its slide:

Elsewhere on the isles off Europe, the Bank of England continues to ramp up its bond-buying spree whilst on the Continent the European Central Bank is to draw up a toxic debt "bad bank" plan. Further on, Japan faces its most difficult economic period since that following WWII, S&P revising the nation's outlook downward from "positive" to "stable". Indeed globally, the Organization for Economic Cooperation and Development sums up the macro economic effect from COVID as the last 100 years' worst such event in peace-time.

Peaceful may not necessarily be the state of Gold Bulls' sleep these days as we go to the two-panel graphic of the daily bars from three months ago-to-date on the left and 10-day Market Profile on the right. The overall sideways chop of price now two months on has sent Gold's "Baby Blues" -- those dots of trend consistency -- into comprehensive inconsistency. So much so that for those of you teaching Economics 101 and in need of an example of "trendlessness", there's your chart. As for the profile, pick an apex, any apex, and do so to The Animals tune from '65: "We gotta get out of this place, If it's the last thing we ever do...":

Now in this missive's title we specifically point to Silver as "a concern". And oh how our wayward Sister is at times as we turn to her like two-panel view. Cowering in fear near the base of her Profile (at right) she senses the punishing history that typically follows her "Baby Blues" (at left) going into accelerative decline. Silver did put in a fairly buoyant week in settling at 17.59. But should she not get off the schneid right quick, the 16.30 level as herein mentioned a week ago could indeed come right quick, especially should price slip sub-17.19, from there being "nuthin' but air" to 16.30 as depicted:

As for the last 21 trading days (one month) in general, here are the percentage tracks of the five primary BEGOS Markets (Bond / Euro / Gold / Oil / S&P). Clearly Oil is the runaway winner, not that overwhelming an achievement given it having been priced below zero a mere 38 trading days ago. Then there's the S&P having just come off over "concerns of COVID cases spiking", (to which the Lieutenant Governor of Texas suggested is what happens when testing having initially been in 12 counties increases to now 254 counties, even as hospitalizations actually decrease). The Euro has picked up against the Buck, however we shan't be surprised to see that reversed given the EuroZone's COVID recovery not being as swift as that StateSide. And there's the two safe havens of the Bond and Gold, both literally flying beneath the radar of the red 0% axis across the graphic: 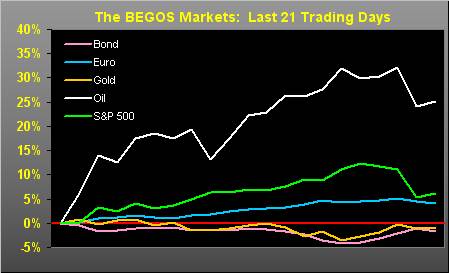 And thus let's go to where Gold sits in its Stack:

Gold's Value per Dollar Debasement, (from our opening "Scoreboard"): 3556

In closing we've this biting bit from the "You Cannot Make This Stuff Up Dept". Who can forget from back in August 2017 the diversion of a Transportes Aereos Portugueses flight from Brazil to Portugal due to (according to Reuters) "...a passenger who was biting other people on board and assaulting crew members..." all in turn causing a passenger to miss their connecting flight to Norway. In bringing the case for the passenger's being compensated all the way up to the European Court of Justice in Luxembourg, 'twas ruled as an "extraordinary circumstance" such that TAP was relieved from having to so pay. To be sure, biting even in the boxing ring is against all the rules (albeit there have been high-profile highlights of such). But the bottom line is: if you're boxed into any corner, make sure 'tis that of Gold! 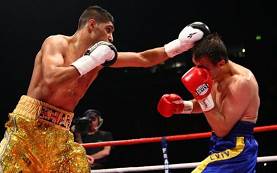