What's wrong with uranium? Nothing...

Uranium prices have corrected slightly. This—and some bearish commentary from other quarters—has prompted a wave of questions from readers asking for my current take. The short answer is yes, I remain very bullish.

Let’s look at the chart first, and then I’ll tell you why. 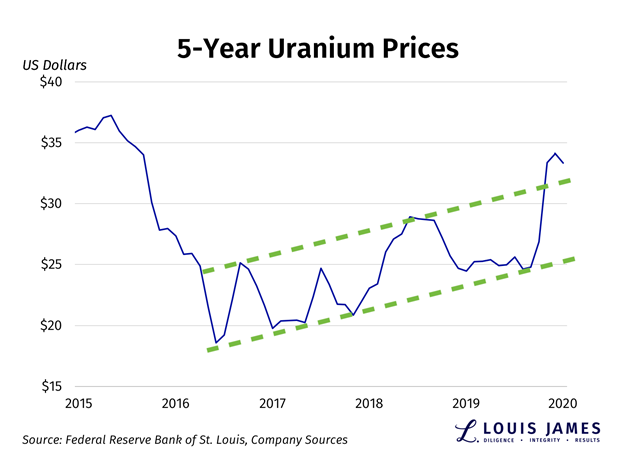 I’m not a technical analyst, but anyone can see that this chart remains very bullish. After breaking out sharply above the upper trend-line, it’s no surprise at all to see uranium correct. That’s all the more so without any news in the real world (like major new long-term contracts signed with miners at much higher prices) to send uranium higher.

My technical friends tell me that the series of higher lows is especially important. Uranium could correct down to $26 or $27 without threatening that lower trend-line.

Simply looking at the price action, I see no cause for alarm at all.

Moving on the from the price chart, as a fundamentalist, I’d say I’m even more bullish than last month, when it seemed like uranium prices were ratcheting up every day.

First, I don’t buy the bear case based on mine restarts. The major shutdowns remain in place. Remember that Cigar Lake alone is about 13% of the annual supply, and Cameco isn’t even talking about restarting it yet.

That aside, no amount of restarting mining operations should really hurt uranium prices. Where prices were before the COVID-19 shutdown assumed certain levels of production this year. Those output levels will not be reached, no matter what.

The more and the quicker the restarting, the less that undersupply will be, but there will still be less supply than expected.

Also, last month I didn’t know that Kazatomprom has stopped selling into the spot market—and may even do some buying. I can’t overstate how bullish it is for the world’s lowest-cost, big producer to make these announcements.

New discoveries are essentially irrelevant to the price of uranium over the next couple years.

Of course, everyone likes it better when prices keep rising and rising. How exciting! But we all know that no price goes up forever.

And we know that the fundamentals haven’t changed. Whatever happens decades down the road, the world needs uranium for its nuclear power plants now, and for years to come. Enough of the stuff simply cannot be mined profitably, even at this year’s slightly higher prices.

Uranium prices could put in a new 5-year high and still not be high enough for miners to profit.

Yes, there is excess inventory in some markets (Japan), which some players in this space see as secondary supply that could push prices lower again. But this years’ price action and reports from producers who’ve tried to buy that surplus inventory, tell me that it’s no longer for sale.

If it’s true that excess inventory is no longer marketable supply, buyers will have to deal with miners sooner than they’ve been expecting.

I believe miners will demand—and get—much higher prices than we’ve seen since the year after Fukushima.

I’m glad to be in the minority on this, however. It means I still have a chance of buying the uranium stocks on The Independent Speculator shopping list at good prices.