Connect the dots: a speculator's paradise is heating up

The U.S. Federal Reserve and central banks around the world appear to have the printing presses going full tilt these days.

This has fueled the greatest “V recovery” any buy the dip investor could have asked for.

Tech stocks and precious metals stocks alike have been among the best performers and outperformers YTD (and we’ll get to the attention they’re attracting in a minute).

Fueling the fire even more are lower for longer interest rates and yield curve control (YCC).

What Does the Fed Dot Plot Mean?

To me it means that the Fed officials know the economy is not functioning properly and will not for a long time.

It signals that the Federal Reserve believes the banking climate must remain ultra supportive for businesses to remain open.

This has led to an enormous disconnect between the stock market and the economy.

So why are the stock markets within shouting distance of highs?

The answer lies in the ultra cheap credit and enormous financial backing of the U.S. Federal Reserve.

Except a lot of this capital is not going from Wall Street to Main Street.

Perhaps this next piece of information will spark your curiosity, as it did mine…

Through the first 6 months of the year, bankruptcy filings in the United States have hit levels not seen since the peak of the Financial Crisis.

They have already surpassed the peak from the Dot Com tech bubble.

Below is a chart which shows the reported public and private bankruptcy filings in the United States. 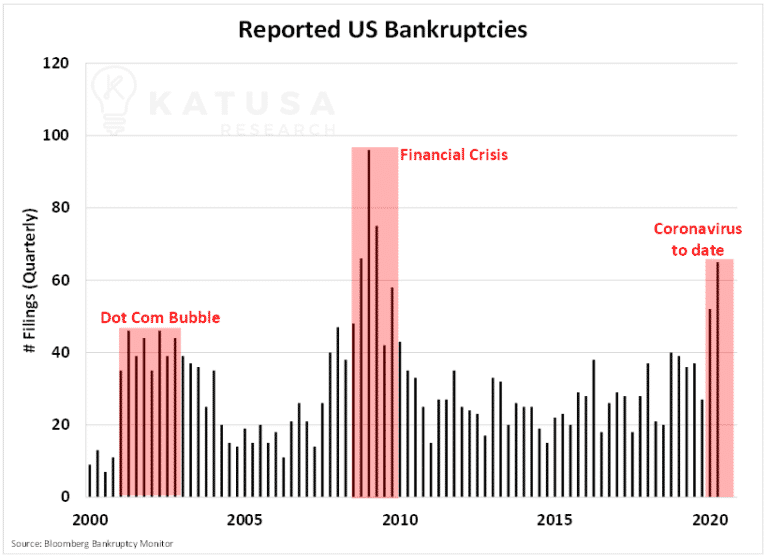 While unemployment is worrisome, bankruptcies are much worse.

And this is why the Federal Reserve is buying corporate bonds.

If companies fail, who is going to rehire all the unemployed workers? Where is government tax revenue going to come from?

This is a very scary, slippery slope to navigate.

Connecting the Next Dot: Velocity of Capital

The higher the ratio, the more turnover of dollars there are. This velocity of capital is measurable through the Velocity of Money indicator.

Next, you’ll see a chart that shows the rapid decline in the velocity of the United States M2 money supply. 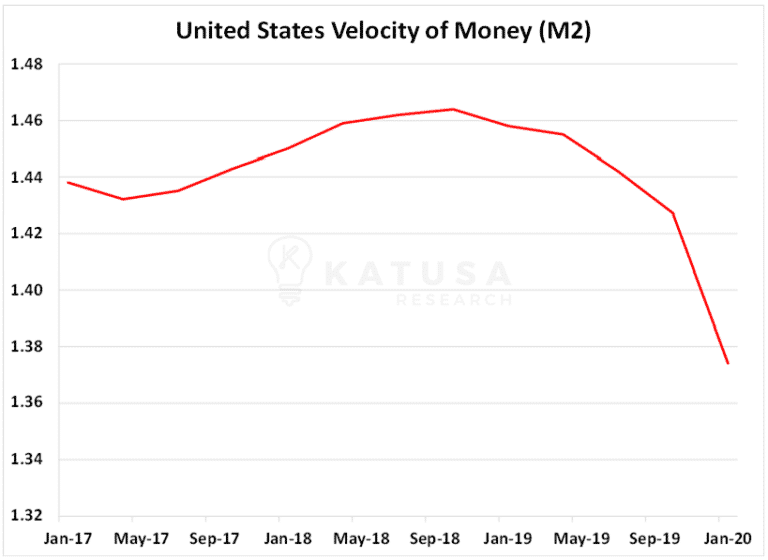 With all of Donald Trump’s “Buy America” focus, this should have increased the velocity of capital. Just the opposite happened. And Coronavirus put a nail in the coffin.

At the same time, public debt held by federal, state and municipal governments and banks is at all time highs. 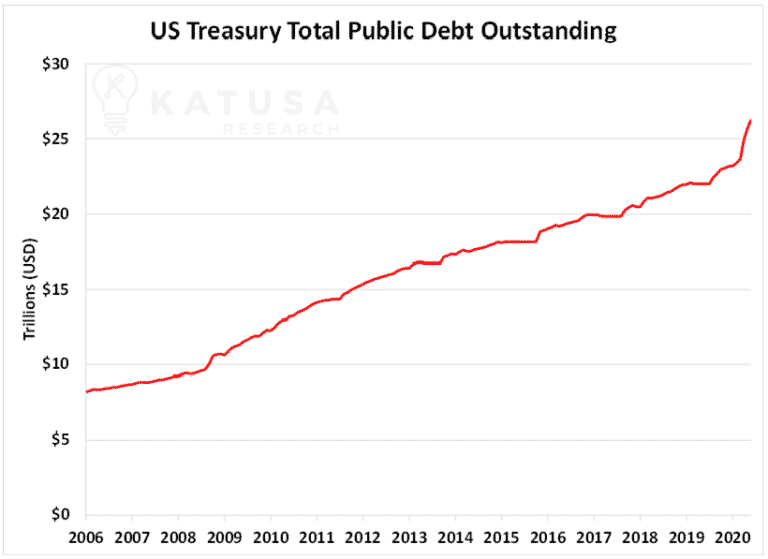 Pushing against the string will only work for so long before the chickens come home to roost.

So How Do You Protect Your Portfolio?

I’ve long said that the person who wins in a deflation is the one who loses the least. That’s why I am positioned strongly in precious metals stocks and U.S. Dollars.

I think most viewing this get the gold exposure.

But the U.S. Dollar exposure confuses and even hangers a lot of people.

As bad as you think the situation is in the U.S., the rest of the world is in an even worse situation.

These are the big winners this year for good reason…

Slowing of capital movements, high unemployment and low productivity all point towards stagflation and an eventual deflation could be on the horizon. This drives demand for safe haven assets like gold and government bonds. 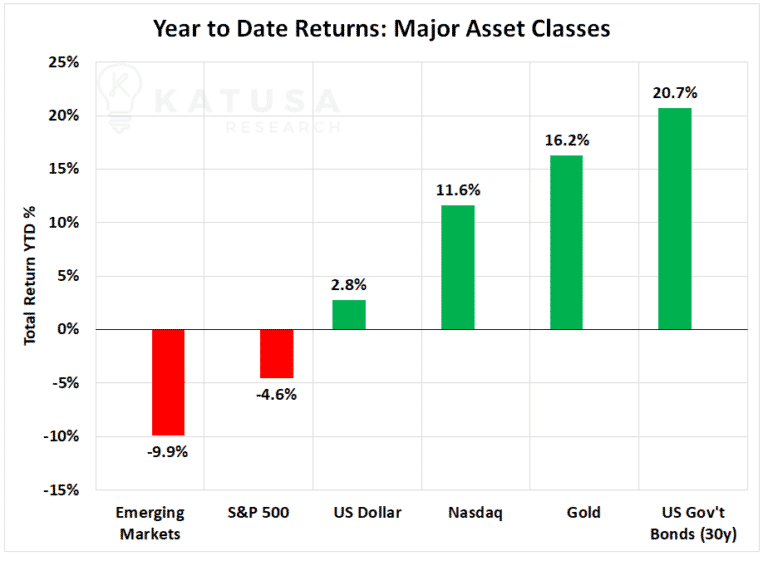 Today we have a plethora of stimulus packages and low interest rates.

In addition, global politics are on a knife edge. Not to mention we are combatting a virus that has killed 474,000 people around the world, which we cannot create a vaccine for.

This is a highly favorable environment for gold and gold stocks.

In the chart below you will see gold has consolidated well in this upper range and has broken above its short-term resistance line.

This week gold tested the waters above $1,750. I do think more consolidation is fine around this price level.

And that is when the fun starts!

All the “gurus” that complain about algorithms and day traders will suddenly welcome them all with open arms.

They bring much needed liquidity and speculation into the sector. Neither of which the sector has truly in a decade.

Can You Day Trade Gold Stocks?

Small players can day trade with ease. Of course, if you know what you are looking for and can interpret drill results or economic studies faster than others.

But big trading outfits need millions of dollars worth of volume in names they trade in. Not to mention a liquid derivatives market.

Most of the junior resource stocks don’t do that kind of volume in a month let alone in a day.

Speculation is an integral part of the natural resource sector.

That’s Why You Need to be Ahead of the Herd

Picking up pennies in front of a steamroller works for a while.

But positioning yourself in world class operators before the speculators and other market “gurus” pile in is how you make needle moving, wealth changing investments.

A few years ago, my subscribers and I made a fortune in a gold company called Northern Dynasty.

My due diligence told me this was a stock that was poised to scream higher. It did…

At the same time, the Northern Dynasty warrants (which are like a call option) were trading at nearly the same price as the stock.

This was pure retail speculation.

And it can spike share prices like a hockey stick hundreds, even thousands of percent… in a very short amount of time.

You’ve seen in the U.S. markets over the past few months in Hertz, Nikola, Chesapeake Energy and many others making 100% gains look like small potatoes.

The good news is this gold bull market is still in the early innings.

Right now, I’m making big moves and putting millions of dollars into the market in precious metal stocks and into other hated, unloved and undervalued sectors.

And cost base the same as our own…

With Gold projects that deliver strong financial returns at $1,500 per ounce gold and have exceptional leverage to rising gold prices.

If you are interested in getting an edge on the herd, click here to find out how to access my portfolio of resource stocks as a member of Katusa’s Resource Opportunities.