This week will be an incredibly important week for BTC in determining the next medium-term trend move. Q2 stood out not just in terms of the large absolute percentage gain recorded, but also for the fresh virgin inflows coming from the US, specifically into CME and Grayscale. This brought overall BTC Open Interest to new record levels across markets - the overall options OI nearing $2bn overall, with $1.5bn for the June expiry alone, and Grayscale (GBTC) saw $1bn worth of spot inflows in this first half of 2020 alone. With the quarter drawing to a close, and the bullish momentum that drove much of Q2 fading towards the end, it is worth keeping a close eye if these fresh positions will be rolled and give BTC the push needed to take it past 10.5k this year.

Based on historical performance, after a blockbuster Q2 like the one we just had, Q3 tends to be a breather quarter with low to slightly negative returns. It is possible we are in for a correction this quarter, but a lot would depend on the performance of BTC assets this week in particular, with many of them sitting on crucial near-term pivot points. 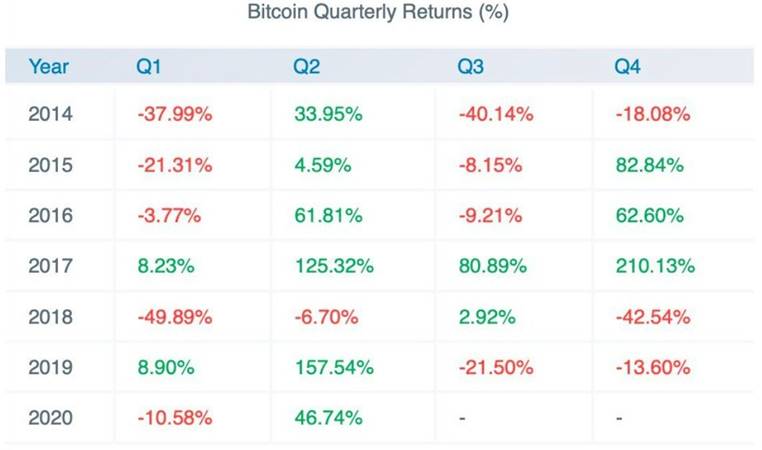 1. BTC spot again tested the 8.8k support and more importantly the 200 2-day MA (Yellow line) that has marked & confirmed important trend changes since 2019. Black Thursday this year followed shortly after the breach of this line on 11th March. Including yesterday's hold, this quarter alone we've tested the level 4 times now, with a substantial immediate bounce each time - we're watching this line as critical in determining the next big directional move.

2. CME Jul futures which is now the front month contract broke wedge support last week as the early flows seen were primarily sell flows. The 9k level (Yellow horizontal line) is now a key pivot level, and a close below it could spell a deeper correction for Q3.

3. GBTC which to us represents the far end of the BTC forward curve (due to the 6 months primary share lock-up), is probably the most bearish of all. Instead of printing a TD 9 reversal last Tuesday (Highlighted circle), it printed a TD 13 top - and confirmed this by closing below the head & shoulders neckline at $10 (Yellow line) on increasing volume. After staging a mini rally into the week's close on Friday, it too is sitting on a final support level at $9.40 (Blue line), a breach of which would likely send it another 30% lower to $7.

One thing that has performed remarkably well through all this has been a short vol strategy - with 1m ATM implied vol (Blue line) now reaching the all-time low levels we saw in early-19. This has been THE standout move this quarter - coming from a high of ~200% implied in mid-March to just around 50% implied now. We still favor selling the 3m or 6m tenor (Red & Green line) as this to us still has juice to the downside, and are looking at selling Puts around the 6-7k level, where we see good medium-term support for the next exponential move higher. For now our preference lies in the Aug/Sep contract, as we would like to give ourselves flexibility going into the US elections in Nov 20, where we will likely see some posturing by the candidates with regards to Cryptocurrencies and some resulting volatility. 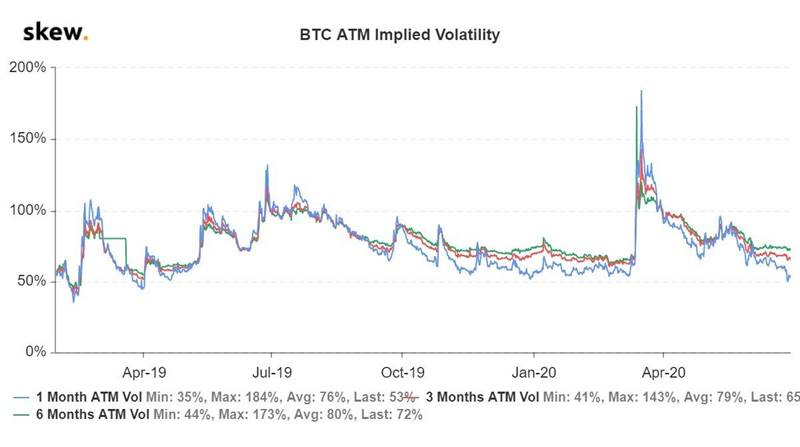