Today a joint appearance of America’s most powerful economic policymakers testified before the U.S. House of Representatives House Financial Services Committee to discuss their methodology in aiding those affected by the resurgence of new coronavirus cases. Both economic policymakers offered different pictures of the current state of the U.S. economy. The secretary of the Treasury had a more optimistic forecast saying that he, “expects a rebound in the second half of the year”, while Chairman Powell was less optimistic about his forecast.

Both economic policymakers cited some optimism with Chairman Powell acknowledging the better than expected May employment numbers, and Secretary Mnuchin saying, “We are in a strong position to recover because the Trump Administration worked with Congress on a bipartisan basis to pass legislation and provide liquidity to workers and markets in record time.”

However, Chairman Powell’s testimony was much less optimistic saying that the economic future is “extraordinarily uncertain”. Powell added, “We have entered an important new phase and have done so sooner than expected. While this bounce back in economic activity is welcome, it also presents new challenges — notably, the need to keep the virus in check.”

Concurrently Dr. Anthony Fauci and Dr. Redfield testified during a Senate hearing about the recent large uptick of new Covid-19 cases. During this testimony Dr. Fauci warned, “The number of new infections in the United States could more than double to 100,000 a day if the country fails to contain the surge that is now underway in many states.” The nation’s top infectious disease expert said that the, “Recent sharp rise in cases, largely in the South and the West, puts the entire country at risk.”

According to the New York Times, “The number of new virus cases in the United States has gone up 80% in the past two weeks.” The article cited that, “Case counts have climbed sharply in many of the states that were the first to reopen, including Florida and Texas, which recently forced bars to close again. More than 4,600 new cases of the virus were announced on Tuesday in Arizona, … as Oklahoma and South Carolina also reported single-day highs. California’s case count has exploded, surpassing 220,000 known infections.”

Even as U.S. equities rose dramatically on the final trading day of the second quarter, gold staged a dynamic rally with August gold futures trading to a high today of $1804. This is the highest intraday high since 2012. Although gold is trading at $1799.20, just below $1800, our technical studies indicate that is not if but when we will see gold challenge and close above $1800 per ounce. Our studies also indicate that gold could trade as high as $1880 by the end of 2020. 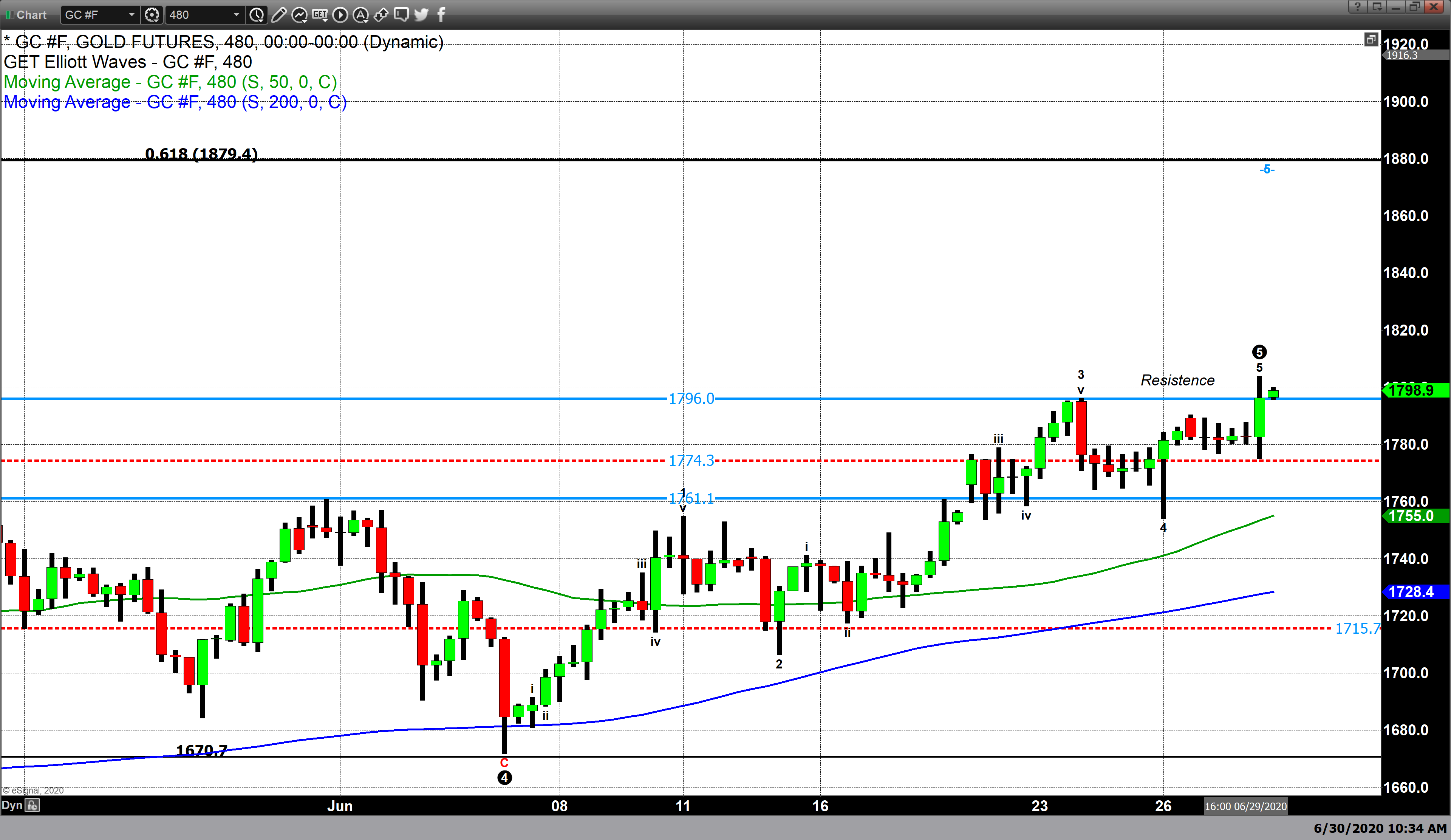 Solaris surges on drill hole discovered by legendary mine finder

So did the fat lady sing in gold and silver Tuesday?

Tuesday's Charts for Gold, Silver and Platinum and Palladium, August 11

Where are the stops? Tuesday, August 11, gold and silver