For the trading period that extended from April 2013 to August 2019, precious metals investors were essentially the laughing-stock of the entire financial market. During this span of time, gold prices were caught in a sideways trading range that led many investors to believe that the precious metals were no longer relevant and that continued valuation declines were likely to be encountered after the “ultimate bubble” had burst.

However, things have changed dramatically over the last few months and it now looks as though gold is ready to overcome the prior record highs (at $1,917.90) that were established in August 2011. In addition to the strong fundamental case that already exists for gold, there are several factors in technical analysis that suggest gold is already making moves that are much stronger than those that were seen less than one decade ago. 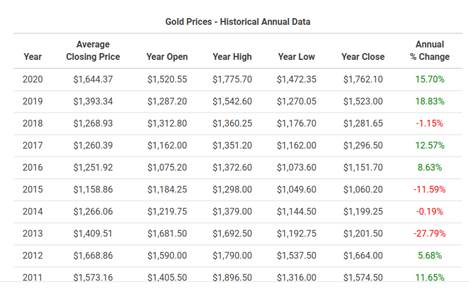 Clearly, this is a trend that is gaining in strength and it would appear that anyone with short positions in gold or silver has assumed an unhealthy level of portfolio risk. As a result, these broader trends are encouraging for anyone that is bullish in the space and there are still excellent gains to be made by investors with a trading stance that is aggressive enough to buy into the upward momentum.

Our previous trading ideas for gold and silver have shown that both metals are likely to perform well, but to varying degrees. At current price levels, gold markets are trading just 8% below the record highs that were established in August 2011. This activity presents some interesting contrasts with silver markets, where valuations are still trading more than 170% below their record highs.

In the 1970s, the United States experienced some of its highest inflation levels in recent memory and this actually propelled silver prices above $48 per ounce. Even with the recent rallies in the precious metals complex, silver prices are currently trading at about $18 per ounce and this disparity supports arguments which suggest that there’s still tremendous upside potential present in these assets.

Investors with a less aggressive stance on the market will likely wait for market pullbacks before taking another opportunity to go long in gold or silver markets. Of course, there are obvious advantages that are associated with this type of approach because it can be easier to “buy low” in volatile markets. But if we continue to see upticks in the number of COVID-19 cases that are dispersed throughout the country, it will be much more difficult for investors to buy into stock markets based on declining earnings expectations.

Additionally, central bank stimulus continues to define strategic activity by official names in many parts of the world and low interest rate levels have been associated with continued rallies in precious metals throughout the history of the financial markets. As a result, there doesn’t appear to be much that is standing in the way of another record high in gold and silver and investors should consider their own levels of strategic risk before taking an aggressive trading stance in this historic precious metals rally while it unfolds.