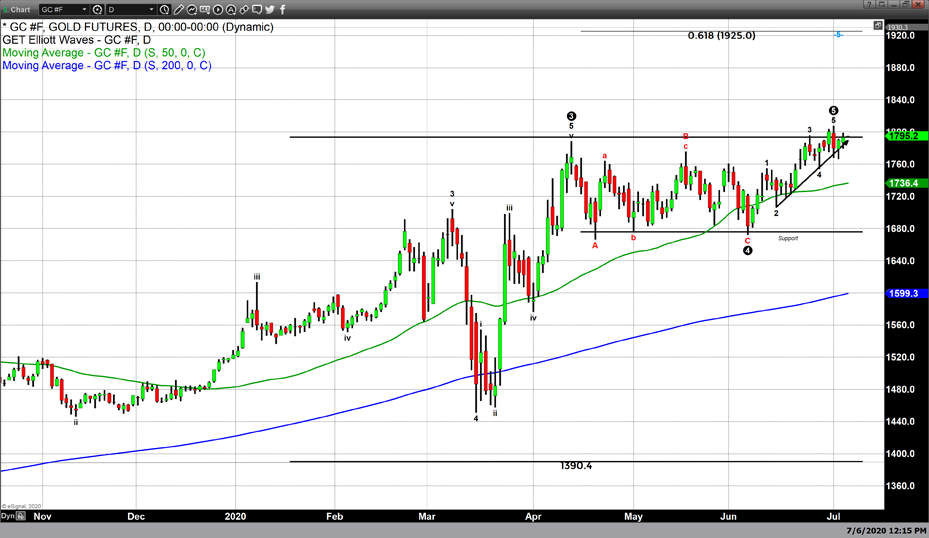 Precious metals in many cases have both a safe haven allure, as well as an industrial component. While gold is used in only a limited amount of industrial applications, palladium and platinum, for the most part is mostly used as industrial metals, and only to some degree used as a safe haven asset.

Returning from last week was dollar weakness that spurred a rally in some of the precious metals. Today all metals closed positive, however gold would’ve most certainly been negative, or slightly positive if not for the weakness of the U.S. dollar. Currently the dollar index is off by 0.61%, a net decline of .596 points, and fixed at 96.71.

Dollar weakness is certainly evident in spot or physical gold as they both benefited from the dollar’s decline and bullish market sentiment. According to the KGX (Kitco Gold Index), as of 3:22 PM EDT spot gold was fixed at $1785.20. Today’s gain of $10.80 was a combination of dollar weakness which contributed $6.90 of today’s move, which was added to normal trading which took spot gold fractionally higher to the tune of $3.90. 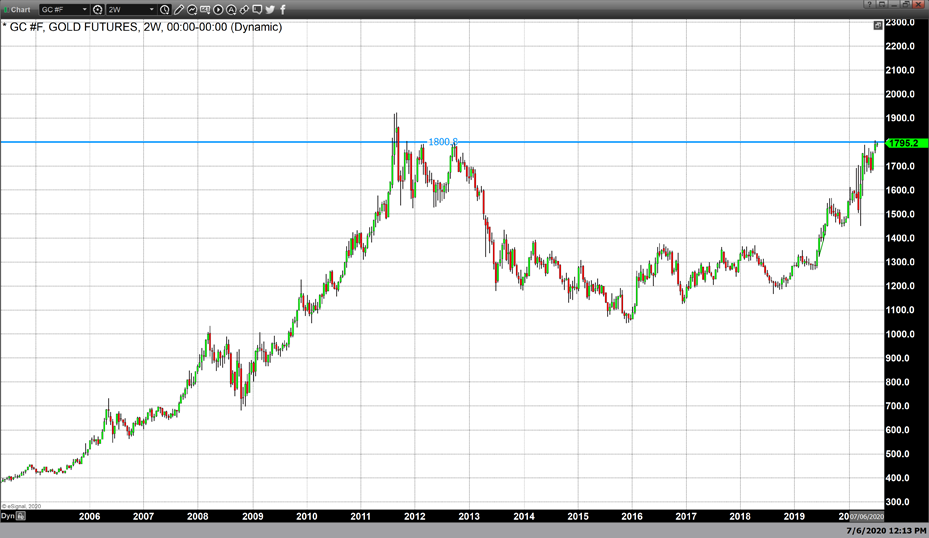 Once again, we are witnessing a fairly rare market scenario in which both precious metals and U.S. equities run in tandem to higher pricing. The rationale behind both asset groups moving in tandem, when they typically have an inverse correlation is the belief that the Federal Reserve along with other global central banks continue to print money devaluing their currencies. Because gold is paired against these currencies any weakness in them will cause gold to rise. Such is the case today.

Market participants continued to have an extremely guarded outlook as it pertains to the climbing number of new coronavirus cases reported in the United States. Although these cases are isolated to hotspots in the country, they are nonetheless alarming.

However, this guarded outlook was not evident for market participants involved in U.S. equities. The Dow Jones Industrial Average gained over 459 points and is currently fixed at 26,287.03 which is a net gain of 1.78%. The S&P 500 gained 1.59%, while the NASDAQ composite closed at a new all-time record high after gaining 2.23% today and closing at the historical level of 10,435.08. Solid economic data coupled with an assumption that the pandemic and the economic fallout will run its course sooner than anticipated lies at the heart of today’s equities rally.

As reported by MarketWatch, Adrian Ash, director of research at BullionVault in his daily note said, “last week’s swing towards 2011 levels in U.S. dollar terms near $1,800 per ounce is attracting a flood of new interest, piling on top of January-June’s heavy demand. Fear of missing out could spur a dramatic spike [in gold] if the economic, health and political news continues to darken. Heaven forbid we get a hot, angry summer to match 2011. But rarely have there been so many tailwinds for gold.”

He also noted that, “The economic slump caused by Covid-19 has spurred record government deficits and central-bank inflation to try and offset it. China’s power grab in Hong Kong is worsening geopolitical tensions ahead of November’s U.S. election, with the U.K.’s looming no-deal exit from the [European Union] now baked in the crust for December.”

A vast majority of analysts that specialize in the precious metals including myself are extremely bullish on the long-term prospects of gold pricing. The economic fallout that will emerge following the conclusion of this global pandemic is inevitable. You simply cannot swell national debt to the level in which it is without major repercussions.

The $6 trillion expenditure by the Federal Reserve and US treasury is the most massive bailout- aid package that the United States has ever attempted. More importantly the United States is not acting alone the European Central Bank, the People’s Bank of China as well as the Bank of Japan and many others have used their central banks to help those affected by the pandemic. With global debt rising to the highest level ever, I fear the economic fallout will be detailed in history books years to come.