Thunderstruck: most shocking gold alert ever!

ANYONE in human history, who has ever BOUGHT AN OUNCE OF GOLD, is now up!

Though the metal closed higher in 2011, with intra-day reaching $1,913, it was during a BLOW-OFF TOP parabolic mania surge, not a sustainable, real and EARLY-STAGE pop like today's!

Literally, any person, government or institution that owns GOLD, as we do, is now up.

Just think of the media coverage that is still to come; think of the millennials, who in 2017 took Bitcoin from $500/coin to $20,000/coin, quit their jobs, mortgaged their couches and sofas, borrowed from friends and family, all so they could buy a digitally-mined technology, and are now learning in their Robinhood app that there's such a thing called the GDX and the GDXJ indices!

I get tickled just thinking about the upside here. We're already seeing huge, TRIPLE-DIGIT MOVES with previous picks that are SNAPPING BACK like coiled springs or rallying into NEW DOMAINS and all-time highs.

I'm compiling a COMPREHENSIVE, no-holds-barred updated summary on stock profiles, which are in need of TIMELY UPDATES. This is the SICKEST BULL MARKET ever for gold, and the reason is that inflation has NOTHING WHATSOEVER to do with it. 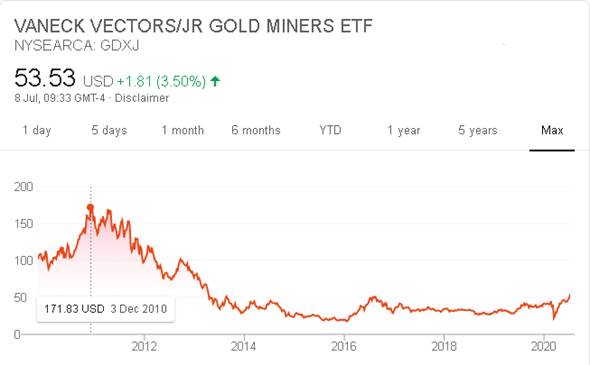 We are SO FAR BEHIND what 2011 felt like. In terms of sentiment alone, the way I felt yesterday (happened to be my birthday) was the way I felt FOR MONTHS ON END during 2011.

To me, yesterday was the first day of the bull market; be ready for something like your most EPIC DREAMS!

Central banks have TAKEN OVER the capital markets. Forget about P/E ratios and normal economics – the markets are now POLITICIZED, since non-functioning companies, industries and communities immediately get BAILED OUT.

Listen to me closely: YOU ARE WINNING!

Governments and central banks have run their course of monetary policy to the point of NO RETURN, to the limit – to the BRINK OF COLLAPSE.

Had China, Russia, India and Brazil been ready to introduce a competing system, the dollar would have already MELTED DOWN – but they aren't.

Interest rates are NEVER GOING HIGHER; the balance sheet of central banks will continue exploding and stocks of the major companies will turn, along with gold, into SAFE HAVENS.

Silver hitting $20/ounce is the next CRITICAL HURDLE.

Once that is locked in, this precious metals NASA shuttle is headed for the stratosphere!

I'm LONG on the sector – LONG gold, LONG gold stocks, LONG silver stocks; we are days away from some SENSATIONAL MOVES, 20% days for juniors and 40% days for companies with major news.

THE BULL IS HERE!