Gold - Near-term price coil or coming off the boil?

Greetings from Rancho Santa Fe, where like Gold's path, the roads which rise from the ocean undulate with an upside bias toward a limitless sky. Undulate, indeed, as per the "Nothing Moves in a Straight Line Dept.", whilst fundamentally fantastic, Gold near-term appears turning technically tepid.

As was anticipated per our prior missive, Gold's technical daily Parabolics study swiftly flipped from Long to Short as this past week unfolded. Recall, too, that the average downside adversity of the five previous such Short trends year-to-date is -50 points, which given Gold's now undulating around either side of 1800 suggests that a move back down through the entirety of The Northern Front (1800-1750) wouldn't be untoward a bit, (our caveat again being that "average" obviously is not "actual").

So with Gold having settled out the week yesterday (Friday) at 1812 -- therein recording its second narrowest weekly trading range (just 1.6% from low-to-high) thus far this year -- we query: is price merely coiling, or has it stopped boiling?

Let's begin with the following two-panel graphic of daily Gold: on the left we've the last 63 trading days (three months) of daily Parabolic trend; on the right we've the last 63 trading days of regression trend consistency. Two completely different sets of mathematical formulae, but yielding similar conclusions: rising dots, be they the Parabolics at left or the "Baby Blues" at right coincide with rising price, and vice-versa, the latter combination thus suggesting lower levels near-term. Such surmise, the Gold Bull would opine, is mere poppycock, that price is simply coiling in anticipation of a springing leap ... whereas the Gold Bear would counter that the declining dots in each respective case confirm those in the other, such that price no longer is boiling but rather is due to drop. We analyze, you recognize (being never unwise): 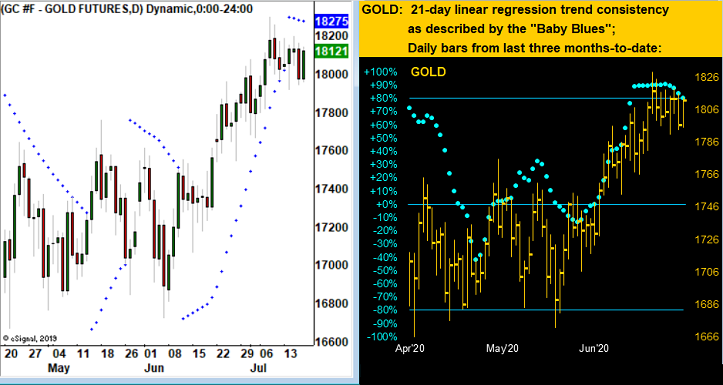 Moreover with respect to the "Baby Blues" at upper right having just breached (barely) below their +80% level, 'tis the fourth time they've so done in looking back one year. For the prior three cases, the price of Gold declined within 21 trading days by as much as 55 points, 7 points, and 27 points respectively. Thus again: should Gold be running out of puff, we see this only as a near-term issue such as to induce salivation amongst the "buy the dip" crowd, (small as 'tis out there, nudge nudge, hint hint, elbow elbow). And with the S&P 500 seeking an all-time high, brought to mind is one of our more salient graphics: 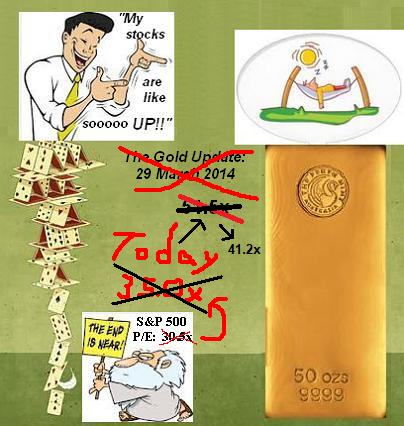 In turning to our more familiar chart of Gold's weekly bars from a year ago-to-date, the ever-ascending blue dots of parabolic Long trend by duration may becoming long in the tooth. 'Tis the 41st Long trend since 2001, and now 17 weeks in length, ties for eighth in duration, and by same, ties for second in the past eleven years. To be sure, Gold is attempting to secure the threshold of The Final Frontier (1800-1900) ... yet given the aforeshown near-term negative technicals, we remain wary to ongoing skirmishes within The Northern Front (1800-1750) which again Gold has "taken", but not necessarily "won". Here's the graphic, the rightmost bar but a nub: 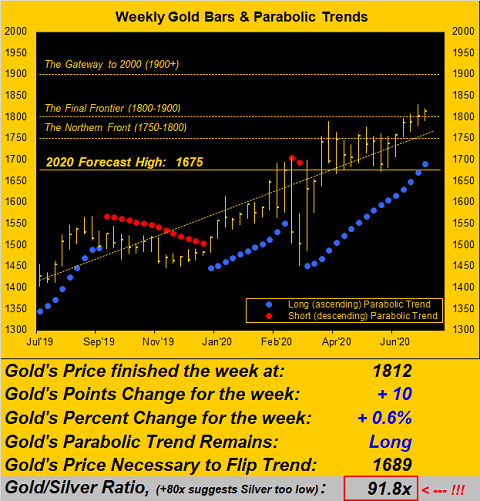 A comparatively compressed trading week 'twas for Gold, but 'twas not so narrow for the Econ Baro which went up straight as an arrow. There were 16 incoming metrics last week, of which 14 bettered their prior period and/or consensus expectation. And as we'd surmised back in March when the economy's toggle switch was flicked to "off" and down went the Economic Barometer, so has it gone up upon the switch being flicked to "on". Oh to be sure 'tis different:, folks from home working, over one million weekly Jobless Claims for filing, bankruptcies abounding, and faux dough being printed at a rate that's astounding. But from the "Where There's a Will There's a Way Dept.", as reborn above the ashes the phoenix rose, so now the Economic Barometer goes: 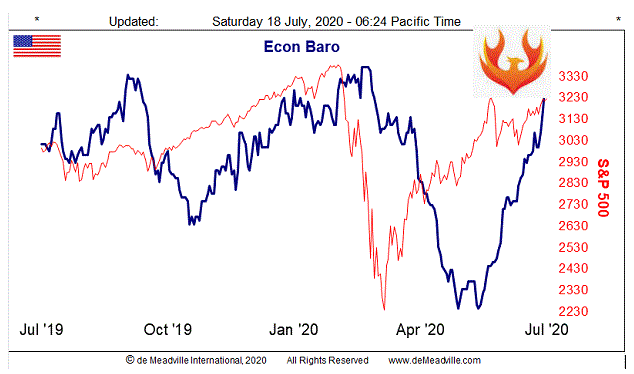 Meanwhile, the S&P 500 Index (red line in the above graphic) traded up to within 95% (3234) of its all-time high (3394), our "live" 41.2x price/earnings ratio as earlier portrayed hardly a surprise for a thus far expectedly horrid Q2 Earnings Season. 'Course, equities buyers are looking beyond that, swimming in da Nile toward its far shore. Of the 32 S&P 500 constituents having thus far reported, 25 of them (78%) have beaten estimates ("oh goodie-goodie"), the unmentioned ('cept here) actual bettering of bottom lines being by but 10 (31%) of the bunch. (Cue the "Zero Interest Rate" justification argument for putting one's hard-earned money at stock market risk).

And in playing catch-up, from the "They're Just Figuring This Out Now? Dept.", it finally dawned on the FinMedia this past week that "The Federal Reserve's $3 trillion bid to stave off an economic crisis in the wake of the coronavirus outbreak is fuelling excesses across U.S. capital markets..." [--Reuters]. Further, FedPres James "The Bull" Bullard (St. Louis) clearly must be taking the Econ Baro into account given his upbeat assessment that economic measures can improve in the year's second half, albeit certain of his colleagues including Pat "Philly" Harker and Lael "The Brain" Brainard remain rather downbeat. Moreover, economic data from Europe right 'round through Asia remains sketchy at best, an exception being China's +3.2% annulaized Q2 growth rate of GDP (should one believe the PRC).

As for the entire BEGOS Markets spectrum, all eight components remain in 21-day linear regression uptrends, the default logic thus being the Dollar must be rightly getting hammered. But the Buck isn't really being hit that hard: at the present level of 96, the Dollar Index has been oscillating between 88 and 103 across the past five years. Either way, 'tis said "the rising tide of inflation lifts all boats". Indeed the StateSide Consumer Price Index just reported for June at +0.6% was the highest monthly leap since that for January 2017. Here are the BEGOS Markets' daily bars for the from one month ago-to-date with every grey trendline in ascent: 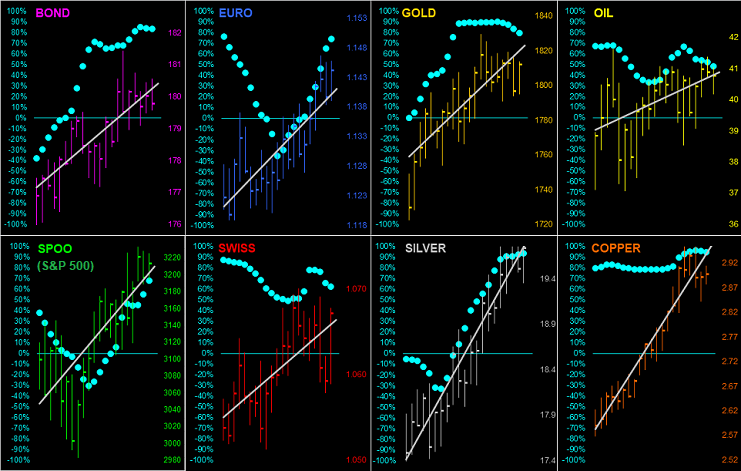 Specific to the last 10 trading days for the precious metals, here we've their respective Market Profiles for Gold (at left) and Silver (at right). And as high as Silver appears in her stack, a valued reader writes in with respect to "quality" equities that across the past 90 days Pan American Silver (PAAS) is +73% and Wheaton Precious Metals (WPM) is +36%. Sweet stuff, Sister Silver! 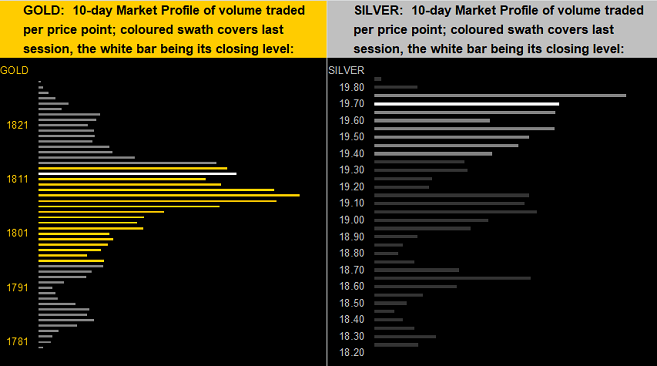 With this week's wrap, here's The Gold Stack:

Gold's Value per Dollar Debasement, (from our opening "Scoreboard"): 3627

The excitability exuded by the Econ Baro ought calm a bit in the ensuing week as just four incoming metrics are due with perhaps tepid improvement at best. Further, we'll get a better grasp as to whether Gold's price is making a coil, or instead coming off the boil. Regardless, make sure that Gold is your financial engine's oil!