Gold returns to glory and the gateway to 2000

The price of Gold has returned to glory: yesterday (Friday 24 July 2020) at precisely 06:04 Pacific Daylight Time (13:04 GMT), Gold traded above 1900 for the first time since 06 September 2011, and moreover settled at a new All-Time Closing High of 1900.3, eclipsing by 3 wee pips that of 1900.0 last set on 22 August 2011. Those final few seconds of yesterday's session saw price pushed to and fro from barely either side of 1900 to finish just above it come the day's final tick, at which instant we simultaneously fist-pumped and exclaimed "Yes!"

And did you revel -- as we anticipated just a few missives ago -- in how swiftly Gold swept up across The Final Frontier (1800-1900)? Recall, even as COVID kicked in during Q1, our concerns over Gold's facing significant resistance as 'twould battle for The Northern Front (1750-1800). A mere 50-point span, but fraught with everything the forces of resistance could throw down upon rising Gold. From first closing earlier this year above 1750 on 13 April, it took 59 trading sessions -- nearly three full months -- before Gold achieved the close which netted 50 points higher in clearing 1800 come 07 July.

But then given the almost resistance-less span of twice that distance, Gold added those additional 100 points to its pile in just the past 13 trading days. Thus with a tip of the cap to the U.S. Treasury, the U.S. Congress, and the Federal Reserve Bank, is proved the following axiom:

And with Gold having now reached the threshold of The Gateway to 2000, (i.e. 1900+), there is no more overhead resistance from days past. Moving forward, upside guidance as to where Gold has never gone before we now leave to those persuaded by trend quadratics and Fibonacci fanatics.

Given that Gold is money, ours is a more simplified route: regress the price of Gold to the creation of faux dough -- even as adjusted for increases in the supply of Gold -- et voilà, our weekly missives open with The Gold Scoreboard, its present Gold valuation being 3601. 'Course with that comes the "overshoot" (as clearly can be seen in the panel right of the opening Scoreboard, Gold getting ahead of itself vis-à-vis the green M2 Money Supply line a decade ago). So query: with expectation for overshoot, have you already entered your "Good-'til-cancelled Limit Short" order for Gold at 4000? Just askin'...

Bearing in mind the usual counsel from the "Nothing Moves In A Straight Line Dept." 'tis quite the sight our next graphic of Gold's weekly bars from a year ago-to-date. The present parabolic Long trend of 18 ascending blue dots ranks eighth in duration since the turn of the millennium, (its Long record being 26 weeks): 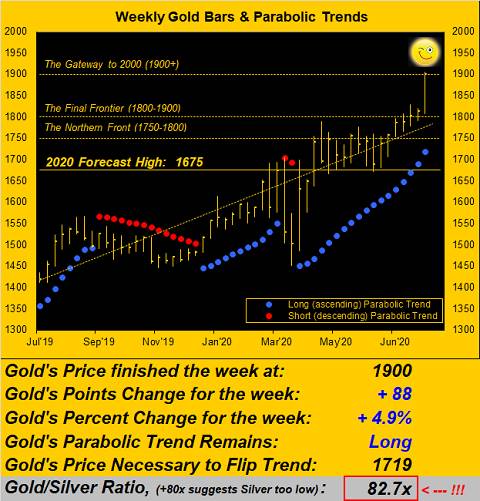 Oh, and Silver went up as well. You can see her here: 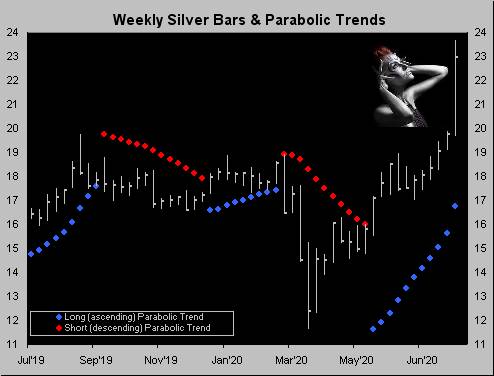 Silver, too, is money. In penning this, the 558th consecutive Saturday edition of The Gold Update, in how many have we flat-out stated that Silver (obviously like Gold) is money?

No need, Squire, the answer indeed being "Many." But recognition of Silver as money has been falling on deaf ears these many years, perhaps akin to "crying wolf". Its further being shunned is found by photography having been transformed from using silver halide crystals to being digitized; and as for using Silver to fill holes in one's teeth, "Fawgit about it, baby; today we're usin' powdered glass resins!"

But what just happened? Why the Silver Wolf as money has suddenly made herself manifest! 'Tis as if "Return of the Incas" has hit theatres worldwide! A mere 22 trading days ago, the Gold/Silver ratio was an unconscionable 100x: today 'tis 82.7x, (still excessively high above the millennium-to-date average of 66.0x). Which for you WestPalmBeachers down there means Sister Silver still has ample upside just to return to comparable parity with Gold; (or if to the downside, finding the white metal falling more slowly than the yellow metal). Still in those 22 trading days since 24 June: Gold is +7.2% whereas Silver is +30.9%. Moreover yet again, Gold is at its All-Time Closing High ... but to double Silver's present price of 22.975 results in 45.950, still below of her own All-Time Closing High of 48.470! Got Silver?

To be sure across the last 21 trading days (one month) Gold ranks the best of the five primary BEGOS Markets per percentage performance as we below see. And quite obviously (as herein described a week ago) when all the BEGOS Markets are on the rise, so too is the perception of inflation as the Dollar Index's level suffers deflation, (it being -3.0% for the same period). The tide is rising: pick a boat, any boat; how 'bout that Gold boat? 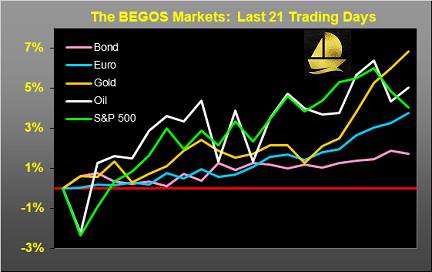 Meanwhile, the stock market as measured by the S&P 500 appears on track to make its own new high (the present price of 3216 being just -5% from the record 3394 level). Again our harp is that thus far for Q2 Earnings Season, 80% of the Index's constituents have "beaten estimates", but only 26% have actually "bettered earnings". (However, that's not supposed to be mentioned).

Still, pro-Gold events abound: the Dollar's weakening combined with the EU's €750 billion stimulus funding has sent the Euro up to levels not seen since autumn 2018; the interest rate on 10-year dough remains ever so low; and Judy "Gold Standard" Shelton was approved for a Fed Governorship by the Senate Banking Committee, (albeit the group 100-fold must still vote their consent).

As to the recent strident leaps for the precious metals, here we've our two-panel graphic of their respective daily bars from three months ago-to-date for Gold on the left and Silver on the right. Our only wariness therein are the baby blue dots of linear regression trend consistency flirting with the +80% axes in both cases. As you long-time readers of The Gold Update know, when the "Baby Blues" sub-80% go, price generally tends to follow: 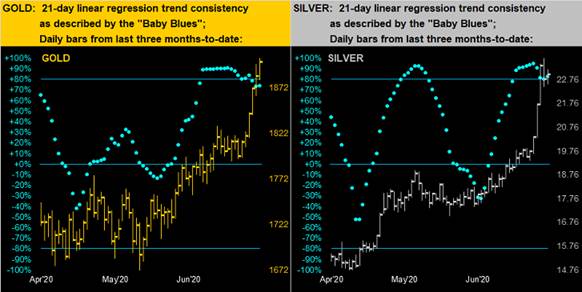 Finally in turning to the 10-day Market Profiles for Gold (at left) and Silver (at right), what can one say? "So many apices, so little time?" To which the late great Richard Russell would opine, "There's never a bad time to buy Gold."

So there we have it, Ladies and Gentlemen: Gold has returned to glory at an All-Time Closing High of 1900, with 1900+ being The Gateway to 2000. Can it reach that major milestone within a week's time? 'Twould be a bit of a stretch given Gold's "expected weekly trading range" is at present 70 points. Regardless, 2000 to us is inevitable if for no other reason than by the Scoreboard's present Gold valuation of 3601. 'Tis thus merely about "The When". And certainly we've a "when" now nigh with Gold at an All-Time Closing High! 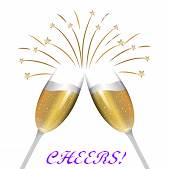