Is silver near a top?

Gold and silver have enjoyed an extraordinary year. On an intraday basis, Comex gold has advanced 31% from its mid-March bottom; silver a stunning 99%. Three-times performance of the white metal compared to the yellow is reminiscent of 2011 when silver made a mad dash at $49 per ounce in April of that year. However, there are growing signs that both safe haven metals are overbought. Momentum will likely carry gold to higher levels but I am less sure about silver.

On the positive side, last week the gold-to-silver ratio (GSR) broke below the long-term trend of higher-lows established from its April 2011 low – this is a bullish indication for silver. The 3-month beta of silver relative to gold has also been steadily rising from less than unity in mid-May to over 3.0 by Friday’s close. This implies that silver gains are significantly amplified with respect to its precious metal cousin as evidenced by the performance from the March lows. But will this continue?

Monitoring the stability of the GSR is a powerful technique for confirming ratio and price local extrema. A measure of stability is the volatility of the ratio over two different time periods. Volatility for this analysis is taken to be the standard deviation of the ratio divided by its mean over a given time expressed as a percent. For gold ratios, I've found 3- and 1-month periods to be useful and consider volatilities exceeding 4% to represent "instability."

As shown in Figure 1, plotting the 3- and 1-month volatilities (Y-axis and X-axis respectively) results in a stability lambda-Map©. Connecting the market day-to-market day points produces a "stability trajectory." By this method, the lower-left quadrant is the domain of "very stable" ratios; and the upper-right, "unstable" ratios. The other two quadrants are considered transitional. 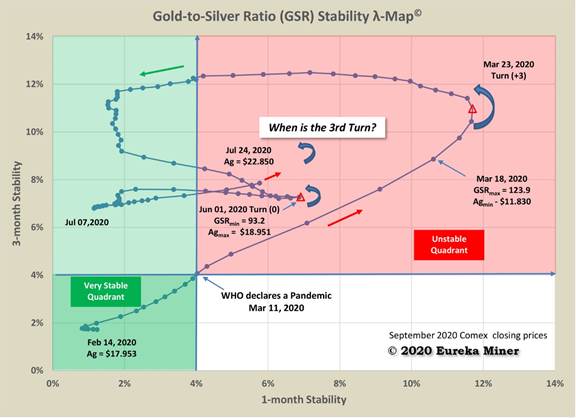 KEY INDICATION: Major trajectory turns in the unstable quadrant typically occur when ratio and price are near their respective extremum. These highs (lows) generally hold through a period of ratio stabilization (typically weeks or months). Major turns are a confirming indicator - anticipatory, coincident or lagging but usually within several market days of the high (low).

Figure 1 illustrates two examples that have occurred this year. The trajectory starts February 14 during a quiescent time in the very stable quadrant. On March 11, The World Health Organization declares covid-19 a pandemic and the trajectory rapidly enters the unstable quadrant (first red arrow, volatilities>4%). Silver price makes a low and the GSR scores a high March 18 followed by a major turn three (+3) market days later on March 23.

The ratio begins to stabilize as it enters the upper-left transitional quadrant (green arrow) but then returns to the unstable region. A second major turn occurs June 1 coincident with a silver high and GSR low. Re-stabilization follows (note July 7) and then it is off to the races again (second red arrow).

The trajectory is currently in the unstable quadrant but as of Friday’s close, is decelerating (note compression of data points). This may indicate we are indeed near a top for silver and a third confirming turn is in the making. Let’s see how the trajectory proceeds this week.

Please follow me on twitter @Eurekaminer for updates of Figure 1. When the major turn occurs, it is game over for silver – at least for a while.