If the futures market is any indication of where traders think gold is going, then $2000 gold might be much, much closer than we think. Currently the December contract of Comex gold futures are trading at $1971.40, which is a net increase of $16 on the day. Considering the speed at which gold pricing has accelerated to the upside, $2000 per ounce could become a reality much sooner than you think.

While many analysts including myself, forecasted $1800 gold, and then $1900 gold immediately following gold breaking above $1800. But we missed the boat in terms of how quickly gold would ascend to those price points.

The fact is since mid-March of this year gold has increased by approximately $500 in value. More importantly during the month of July gold’s assent went from a steep upside angle to a parabolic rise beginning on July 16. From July 17 to today we have seen gold futures gain approximately $150.

This comparison clearly illustrates how quickly gold prices have risen. The former rise in gold pricing resulting in a $500 gained per ounce took over 3 ½ years to accomplish, and in this most current instance was accomplished the same $500 rise in a little over four months.

The real question becomes what does this mean for the future price of gold, and more specifically how much higher can gold pricing go. The short answer is gold could trade significantly higher than current pricing. Fundamentally speaking the events that have taken gold significantly higher in such a short span of time have not come to any resolution.

The global pandemic which has created the new normal we live in today forced the hands of every major central bank in the world to have an extremely accommodative monetary policy that would include interest rates either near zero, and in some cases negative as well as massive amounts of quantitative easing to provide the needed liquidity and capital for economies worldwide to stabilize.

The Federal Reserve added $3 trillion to their balance sheets through purchases of mortgage backed securities, U.S. treasuries and corporate bonds. The “Cares Act” passed by the House and Senate allocated an additional $3 trillion in aid to both individuals and businesses alike.

Now that the aid which is been available through the “Cares Act” will conclude at the end of this month the House and Senate are negotiating the next round of aid called the “HEALS Act” needed to stave off further economic contraction. The longer the United States government is forced to allocate massive aid the more likely it is that we will see gold pricing continue to rise.

Technically speaking it is very difficult to utilize traditional forecasting tools. Market technicians rely heavily upon historical data to forecast where prices might go. That being said with gold pricing at all-time record highs these models are simply unavailable. However, one technique that is still available is to utilize a combination of Fibonacci extensions and Elliott wave theory.

The chart attached is a forecast for gold based upon that technique. The data suggests that this current rally could easily surpass $2000 per ounce, and is most likely to reach $2100 or higher by the conclusion of this rally. 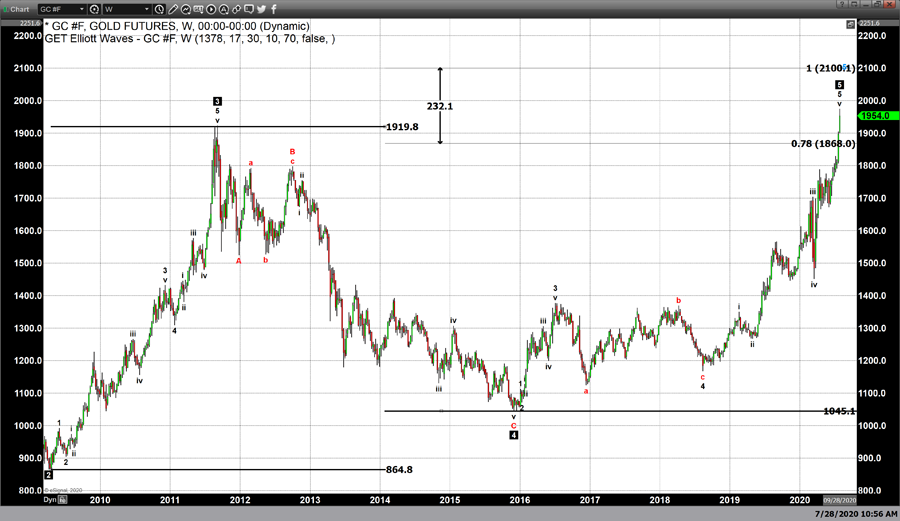