We've embarked upon a WORK OF BEAUTY; the precious metals bull market now includes silver. This is important, since silver's strength is the REAL INDICATOR that the dollar is weak and entered a BEAR MARKET.
Gold and the dollar have surged, IN TANDEM, since 2018, so we didn't have to wait for the dollar to turn in order to enjoy massive appreciation with gold.

On the flipside, silver did nothing BUT DISAPPOINT for years and years; it certainly MADE UP for lost time in 2020 – WHAT A YEAR!

I've enjoyed watching it go up from $12/ounce in March to $26/ounce last week. The mining shares have generated STUNNING PERFORMANCE as well.

Therefore, we also must be aware that what we saw could be THE EXCEPTION, not the rule. 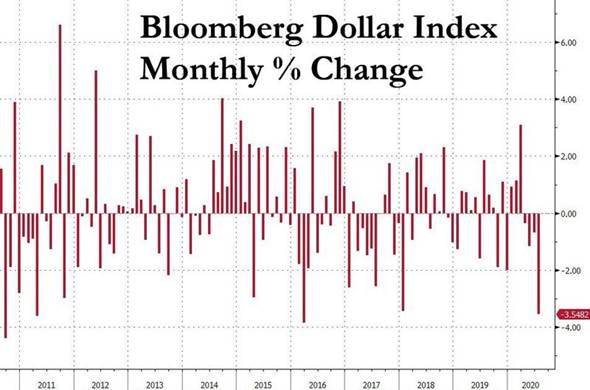 Courtesy: Zerohedge.com
Gold and silver's RECORD-BREAKING July isn't happening out of the blue; it's because the dollar is having its WORST MONTH in years and because Congress, the Senate and the Federal Reserve are not done with their journey of printing currency.

What we want to make sure is that you're aware of these facts and CALCULATING THEM into your decision-making assessment.

In the 2009-2011 bull market, I remember one event more than any other. Silver was already at $31/ounce after an epic move and I read an analysis stating that, in previous times, after such a quick move, silver is to be expected to crash by 40%. It was showing so much strength, though, ARGUED THE AUTHOR, that he believed the metal would go higher, instead of melting down.

He was right. Silver never crashed until it peaked. It kept going up. My point is that the risk, at this particular point is that manipulators could attempt to QUIET THE RALLY and we'll see a huge correction, or, IF THEY FAIL, this thing is going to ERUPT LIKE a VOLCANO.

Wealth Research Group believes that there's a 50/50 chance that we are entering A BREATHER PERIOD for the metals. There's so much fundamental strength for commodities, at present, that we don’t foresee more than a mini-pullback, since the present rally is RARE AND WILD.

There's no reason to look the other way and ignore the potential warning signals. 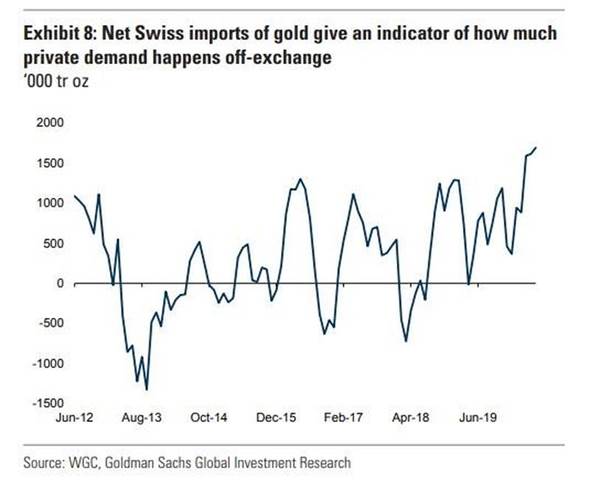 Courtesy: Zerohedge.com
Smart money is DEFINITELY BUYING, more than at any other point since 2012.

Goldman Sachs and Bank of America have certainly had an impact on high net worth households, with their price predictions of $2,300 and $3,000, respectively.

Just one year ago in June, I was in Kenya, enjoying a safari with my family.

Just like you see on the National Geographic channel, a herd of countless wildebeest came to the banks of the Masai Mara River. The crocodiles were waiting in the water, SUBMERGED and IN HIDING, lurking around, but not being too obvious.

20 minutes after our arrival, the wildebeest began to cross. Tourists come from across the globe and sometimes wait a whole week to witness this event, as the wildebeest camp out for days on one side of the river, before gathering the nerve to TAKE THE PLUNGE.

They know exactly why they're reluctant; some of them won't make it and get EATEN ALIVE.

No more than 120 seconds after the leader went in, we saw a crocodile approaching a baby wildebeest, opening its huge mouth and taking it under – its first kill of the day.

The dollar is crossing the Masai Mara River and we are the crocodiles; plenty of profits are coming, but if we TRY TO CHASE them all, we will get tired before the JUICY MEAT jumps in the water.

A 40-year converging triangle technical formation is nearing a BOILING POINT, as we speak (take a look below).

It is pointing towards $2,200/ounce as the LAST GREAT RESISTANCE. Once we go past that, I believe we could see $3,000 very quickly!

Don't wear yourself out; we GOT THIS! 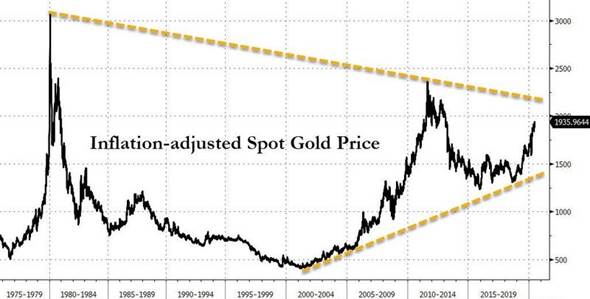 If manipulators fail in to curtail the rally, the next move higher will be UNFORGETTABLE!
By Wealth Research Group