Gold has risen ten out of the last eleven trading days. This week alone gold has traded to a new all-time record high on four of the five trading days. Most impressive was the closing price of gold futures today. The most active December 2020 Comex gold futures contract gained $27.20 and settled at a new all-time record high of $1994.00, this accomplishment occurred as gold’s intraday high was the highest ever recorded at $2005.40 per ounce.

As the last trading day of the month comes to a close, traders and market participants witnessed one of the strongest rallies in history with gold gaining approximately 10% this month. Undoubtedly this is one of the best monthly performance’s gold has produced, and now the precious yellow metal is within striking distance of the elusive number; $2000 per ounce.

In fact, today’s dramatic gains occurred in spite of U.S. dollar strength. The U.S. dollar has been in a freefall since the middle of March when the dollar index was trading at 103. The virtual meltdown of the U.S. dollar has devalued the currency by 10% in the last 4 ½ months.

Spot gold gained $18.90 in trading today closing at $1976.10. According to the KGX (Kitco Gold Index) traders and investors bought gold at such a fevered pace today that without dollar strength the net change on the day would have been $28.10 rather than $0.10 shy of $19.00. Dollar strength accounted for a negative gain of $9.20 today.

Gold was not alone in terms of tremendous gains this week, silver futures opened on Monday at $22.95, and after trading to an intra week high of $26.24 closed at $24.63 a net gain of 5.43% on the day. Considering that silver traded from $18.60 to $24.63 in the month of July we have seen a rise of 25% in silver futures. The last time silver gained such a huge percentage in a single month occurred in August 2011. This is the second largest monthly gain for silver on record. Even though it is trading at roughly half the value of its all-time highs, silver’s upside performance this month was epic. 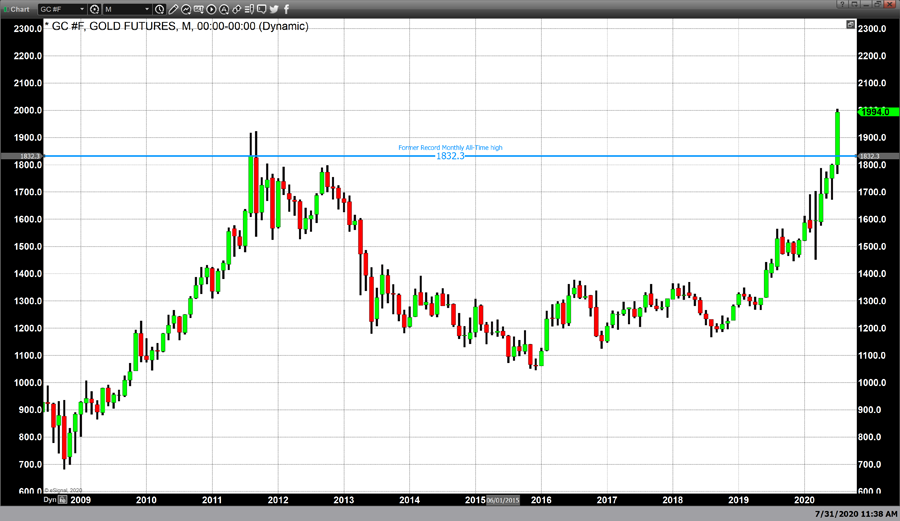 The precious metals complex has gain tremendously as the U.S. dollar has fallen and the Federal Reserve continues its extremely accommodative monetary policy of quantitative easing, as it leaves its “Fed Funds” interest rate near zero.

At the conclusion of this month’s FOMC meeting Chairman Jerome Powell made it clear that the Federal Reserve will do whatever it takes to help stop the speed at which the economy is contracting. The Fed has committed to continue to add to its balance sheet of mortgage backed securities, treasuries and U.S. corporate bonds to the tune of 120 billion per month.

As reported by Reuters on Wednesday, “The surge in U.S. coronavirus cases is beginning to weigh on economic activity, the head of the Federal Reserve said on Wednesday, and he promised the U.S. central bank would “do what we can, and for as long as it takes,” to limit damage and boost growth.”

However, the massive action by the Federal Reserve could not stop the largest GDP contraction in the history of the United States. Data this week revealed that the GDP has contracted by almost 33% in the last quarter, the greatest contraction of the Gross National Product in history.

While we acknowledge that the current COVID-19 pandemic at some point will run its course and conclude, the economic fallout that will follow will be a stark reminder of the tremendous loss of lives, and economic hardship many people are facing globally for years if not decades to come.