Gold just made history, reaching the psychologically significant $2,000 level for the first time ever.

Investors of all stripes are not just paying attention, they’re now allocating real money to the sector.

One of the things that best helps define a true gold bull market is its price action in multiple currencies.

Until recently, gold had been setting record all-time highs in pretty much all currencies around the world… except the US dollar.

But in late July, that final obstacle was overcome.  That’s when gold set a new high in every major currency, including the almighty greenback.

Since bottoming at USD $1,050 in late 2015, gold is now up by 90%.  Its price chart shows the metal is establishing a series of higher lows and higher highs; a clear bullish technical signal.

And now it has set record highs in all major currencies.  That’s a key aspect confirming gold’s bull market.

Here’s how that looks. 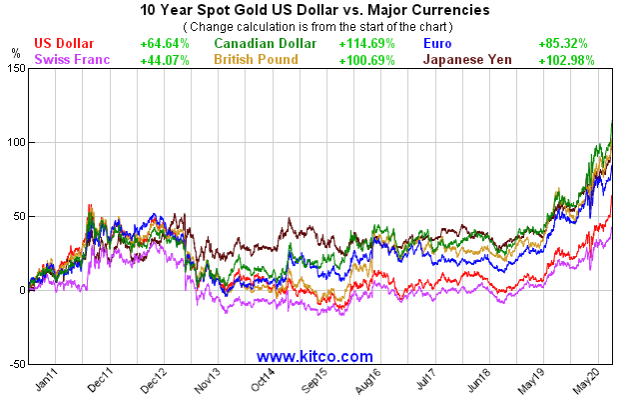 Over the past 10 years, gold has more than doubled in 3 of the six most relevant currencies, and set record highs in all of them.

Over a span of just two weeks in March, the Federal Reserve pumped trillions of new dollars into the monetary system.  That was more than all the money it had created in three decades prior to the 2008-2009 financial crisis.

In all likeliness, a massive jubilee of debt forgiveness will arrive in America and possibly worldwide.  There’s simply no way government debt will be repaid, and now huge portions of corporate, student debt and consumer debt will likely follow.

Like any hated asset that’s massively undervalued, the contrarians are the first to buy in.  Often they can be years early, but it’s the extreme bargain they simply can’t resist.

The next step comes typically when an uptrend starts and is sustained.  That’s the current stage of gold’s bull market, and it’s when the big money gets involved.

Right now over $15 trillion of sovereign debt offers negative yields.  Bonds are losing their attractiveness as a portfolio diversifier and stabilizer.

Geraldine Sundstrom, managing director and portfolio manager at PIMCO which runs $1.9 trillion in assets said, “We need to diversify our diversifier and look for safe haven beyond government bonds. Given Pimco’s view that rates will be kept very low for years to come causing depressed levels of real yield, gold feels like an appropriate diversifier.”

Citigroup said in May that “new non-traditional investors in bullion, including insurance companies and pension funds” are buying into the gold sector and supporting higher prices.

Still, a recent Bloomberg article highlighted, “Gold ownership among the professional class is viewed to be low. The total value of investor positions in gold futures and exchange-traded funds is equivalent to just 0.6% of the $40 trillion in global funds, according to UBS Group AG strategist Joni Teves. That position could easily double without the allocation looking extreme, she wrote in a note.”

And there are signs that generalist retail investors are becoming interested in the yellow metal.

$2,000 gold is a beautiful round number.  The fact that gold has now reached this level is sure to attract new investors.

It’s going to make big headlines across all sorts of media.

While it’s admittedly a limited tool, the Robintrack application tracks Robinhood accountholder activity.  It shows new buying began already back in late summer 2019 as the price of gold rose to $1,500. 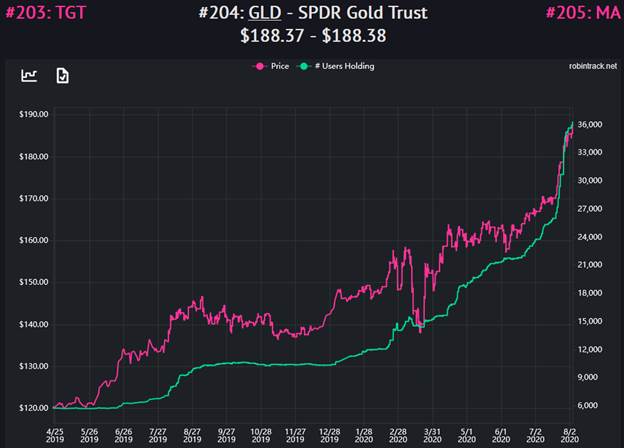 In the weeks before the pandemic lockdown hit North America in March, more buying came as the price of gold rose to $1,700.  More recently, the push higher through $1,800 and now to $2,000 has drawn in even more buyers.

Where is Gold Headed?

In my view the metal has become overbought in the near term. 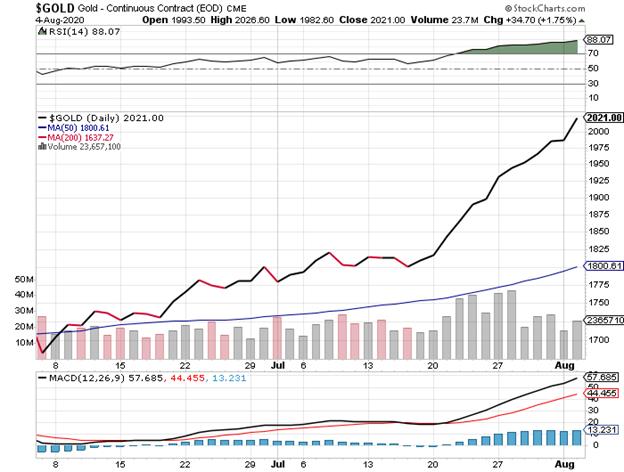 And gold stocks have just established a new high, with the GDX closing above the July 27 high of $43.84. 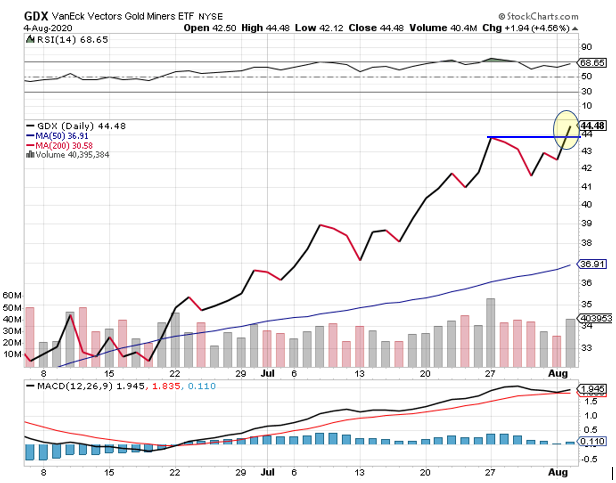 The GDX is not showing signs of being overbought; with its RSI indicator at 69 the GDX has room to move higher.

Interesingly, the gold stocks to gold ratio shows the stocks are not rising as fast as gold.  That slowing momentum also suggests a correction. 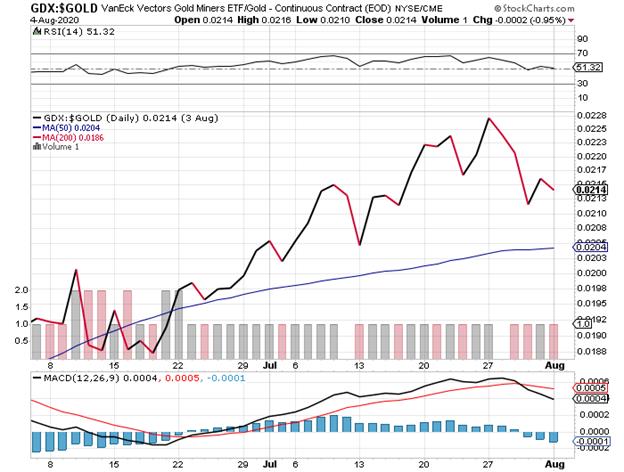 In the near term, anything can happen, though I still think the bias is towards some sort of a selloff to help rebalance sentiment.

But in the longer term, gold is headed much higher.

Remember the trillions of currency units being pumped into the economy?  And that’s just getting started.  The U.S. will run a $5 trillion deficit this year.  The Covid-19 pandemic is far from resolved.  There are challenges on numerous fronts.

A few weeks back I said I expected gold would reach $2,000 this year.  It took only a few weeks.

But expect plenty of volatility on the way.  Once gold corrects, I’ll keep you updated right here on when the time looks right to buy.