While stocks are rallying, you might be surprised to learn that negative economic indicators abound.

Gold, historically a safe-haven asset, topped $2,000 per ounce last week for the first time in history. That, compounded with record unemployment, a rash of small business closures, big-name bankruptcies, government deficits, and unlimited money printing with no end in sight.

Yet Wall Street seems to be throwing a party, if stocks are any indication. In fact, April marked the strongest monthly rally since 1987.

Part of the reason for the cheer in the markets is that the federal government has shown it’s been quick to try to prop up the economy. Since the start of the COVID-19-related U.S. shut down, the government has flushed over $9 trillion into the system, with trillions more on the way.

But be warned -- when the government is the driving force of the economy, capitalism fails. The government's cure to recent economic troubles is just to continue decades of loose fiscal policy that might ultimately cause more harm than good. Afterall, note that budget deficits were at historic highs at the end of 2019. How long can the government keep “feeding the beast” before the U.S. dollar collapses and inflation erases middle class wealth? 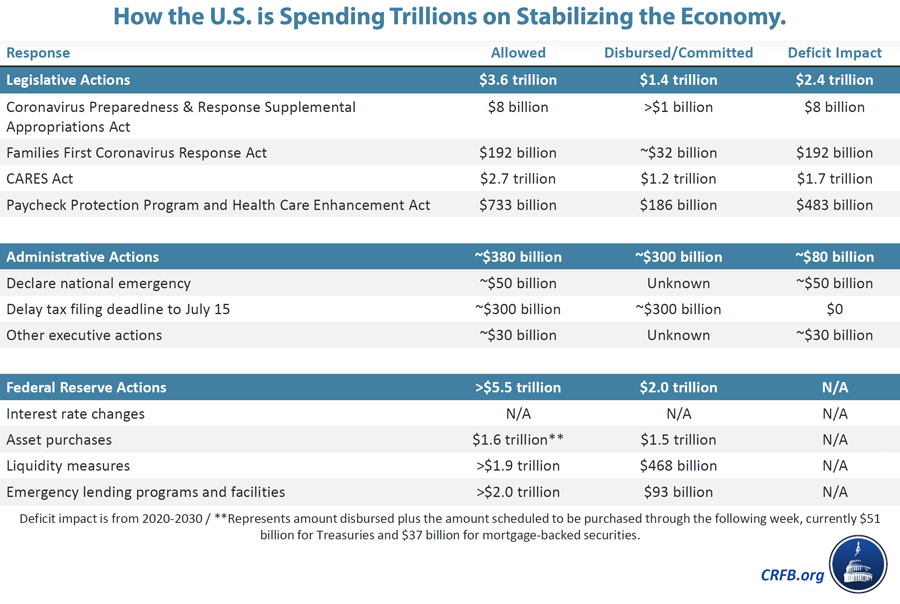 U.S. Debt as a Percentage of GDP is Near WWII levels

The American economy, by several measures, was in uncharted territory before the shutdown. For one, the jobs scene saw significantly low unemployment rates. And stocks were steadily marching upward. The housing market was strengthening. But underneath the high-flying economy lurked a historically large budget deficit that was the result of decades of unchecked government spending. And it is still cause for concern today.

Consider this: the U.S. debt in 2020 is on track to exceed the size of the entire U.S. economy. The last time debt levels were this high was during World War II. Only at that time, in sharp contrast to today, wartime production created the infrastructure that fueled an economic boom after the war that paid down the debt to under 40% by the 1980s.

Unfortunately, new federal debt today helps pay for much less productive expenses. For example, the U.S. government has been paying an extra $600 a week in unemployment for workers who lost their jobs due to COVID-19, essentially paying people to stay at home and not work. Other taxpayer money -- in fact billions of dollars -- has been going toward the airline industry and its empty planes. These kinds of funding efforts are highly unlikely to fuel the same economic boom and debt payoffs that we saw after World War II.

A Lesson Not Learned

Some countries learn from their mistakes, while others seem to insist on taking the road to trouble.

Taking another war-time example, Germany’s reparations following World War I contributed to its national debt, creating hyperinflation there in the 1920s. German marks sank to 4.2 trillion to the U.S. dollar, erasing wealth and making it difficult for families to buy even bare necessities. Often, paychecks received one week were worthless the next.

The U.S. chose the opposite approach: after 2008, the US continued to run historic budget deficits through both Democratic and Republican administrations instead of focusing on managing its heavy debt load.

Germans carry their cash in baskets in 1923, a result of its plummeting value.

The Federal Reserve learned new tricks during the Great Recession. Typically, central banks use interest rates and bank reserves to increase or decrease the amount of currency in the market. Low-interest rates encourage more borrowing, which can stimulate an economy, but at the risk of inflation.

The problem is that low-interest rates discourage saving, which means banks have less money to lend. That’s where “quantitative easing” comes in. This strategy is a controversial central bank tool that increases the amount available to lend by taking direct positions and buying debt in the market. In this case, the Federal Reserve is (through complicated financial wizardry) just printing money.

The Fed turned to quantitative easing to alleviate the pains of the Great Recession, and, as a result, the U.S. economy became addicted to cheap money. The practice of quantitative easing did not stop even after the U.S. economy recovered. Years later when the country is once again facing economic woes in 2020, the Fed opened the floodgates, absorbing $5.5 trillion. That’s most of the new debt created during the recent shutdown. 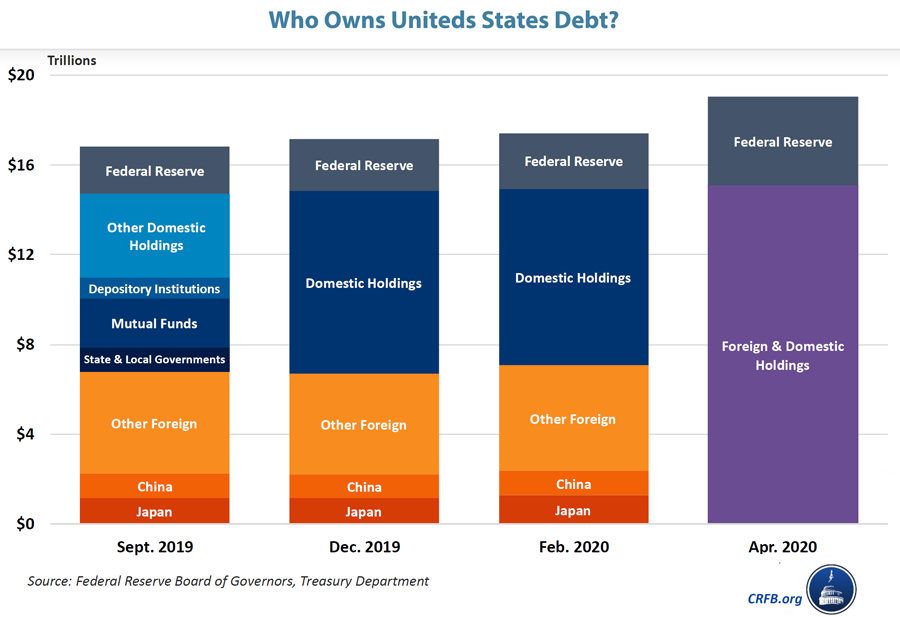 How in the world is the stock market doing so well when the economy is in shambles? Wall Street analysts point to lots of complicated factors underlying fundamentals, unemployment numbers, and the performance of market leaders. Common sense says cheap money and government handouts create market distortions.

“The Fed will do whatever it takes for as long as necessary.”
-- Federal Reserve in April 2020 Statements

Wall Street loves low-interest rates and has for years. Low-interest rates can indeed make it easier for public companies to invest in growing the economy. But it also allows them to borrow and buy back shares of their stock to support their own stock’s high prices.

In early 2019, many mutual funds, equity firms, and individuals were selling stocks, fearing a bear market lurking in the woods. But, once again bucking expectations, the stock market rallied and continued to perform throughout the year. Buybacks were the dominant source of stock market demand, according to Goldman Sachs. Despite statements to the contrary, companies continue to buy back stock during the shutdown, helping to keep prices high.

Low interest rates increase the amount of money in the system, and these dollars have to go somewhere. When interest rates are low, investors can borrow money to invest in the market, which keeps prices high by fueling more demand.

When interest rates are lower than inflation, you effectively lose money in a bank account. On a larger scale, the Federal Reserve's direct purchases of debt through quantitative easing programs distort the bond market. That effectively makes bonds a poor investment and forces investors to the stock market for profits.

Then, adding to the demand from the influx of former bond-buyers, you have companies making stock buybacks and creating more demand. All of this creates a cycle of increasing prices, as investors chase returns and push money into the markets.

My favorite stock market run so far in 2020 was after the announcement that unemployment decreased in May. It was no coincidence that this decrease happened while businesses had to spend Paycheck Protection Program (PPP) loans for the money to be free. PPP effectively masked true unemployment.

The stock market didn't care and rallied anyway. The theme continues. Large corporations received $500 million from the CARES Act, a $2.2 trillion economic stimulus signed in March. Plus, unemployment checks increased by $600 weekly for those who lost their job for coronavirus-related reasons. Finally, the government issued one-time $1,200 payments to individuals, hoping to stimulate demand.

The danger of government spending like this is that there is no grounds for economic recovery in its aftermath. The money is not put toward more productive purposes -- it’s essentially spent on empty measures. 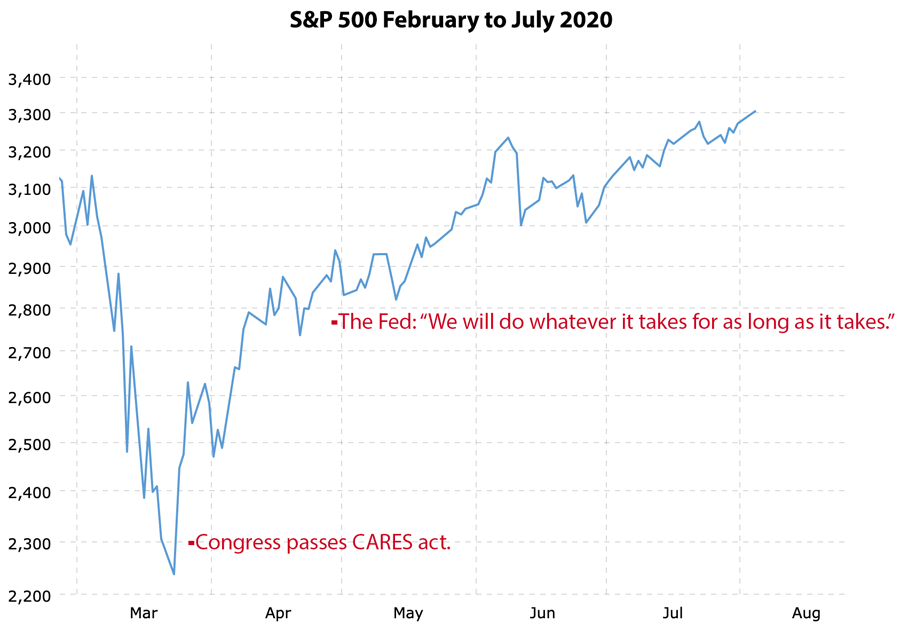 The government has pushed a total of $9 trillion into the economy so far, and likely will spend trillions more. If we are only halfway through this mess, it’s a conservative bet to say that at least another $9 trillion in government stimulus is on the way. That would be almost $20 trillion - nearly equivalent to America’s annual GDP.

That level of state involvement in the economy is unprecedented outside of the former Soviet states. What happens when access to the government equals economic success?

Going Against the Fed

The Fed Will Do Whatever It Takes for as Long as Necessary. Mainstream analysis suggests, "Don't fight the Fed." While the majority of investors chase market returns in stocks, others see an unsustainable and sick Government / Wall Street system on the verge of collapse. As the CEO of iTrustCapital, I have the opportunity to listen to our clients -many of whom are liquidating assets they hold in Gold ETFs to move them over to our platform for physical gold in retirement accounts.

In the words of the great author Ernest Hemingway. “Inflation is the most universal tax of all. The first panacea for a mismanaged nation is inflation of the currency; the second is war. Both bring a temporary prosperity; both bring a permanent ruin. But both are the refuge of political and economic opportunists.”