Both gold and silver pricing plummeted as they were in a virtual freefall from the recent new all-time record highs, in the case of gold, and the near tripling in price of silver since mid-March. As of 4:40 PM EDT gold futures basis the most active December contract is currently fixed at $1918.10, after trading down by $121.60 today, or a net drawdown of 5.97%. 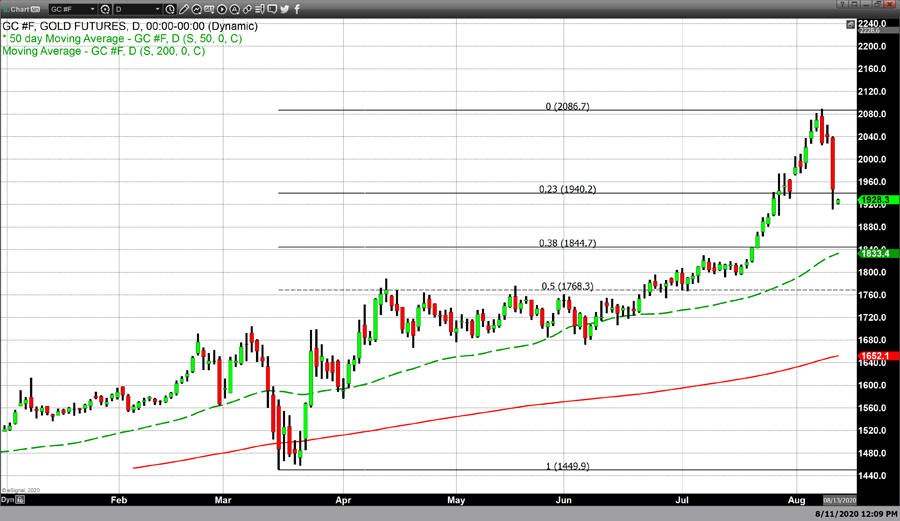 Just as silver outperformed gold during this recent rally, the price reversal that occurred today showed that silver lost roughly 3 times the percentage drawdown of gold today. Silver basis the most active September 2020 Comex contract is currently fixed at $24.96, which is a net decline of $4.29 in trading today, for a drawdown of 14.66%. 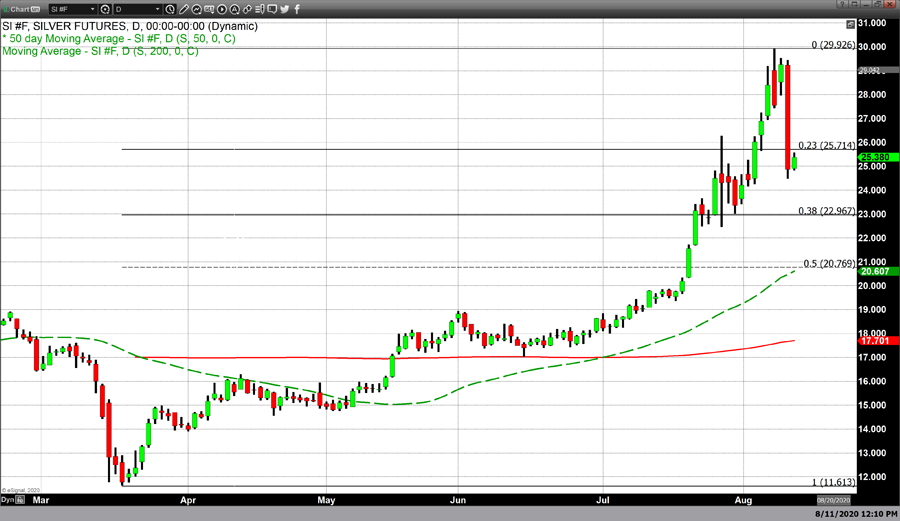 With such a rapid price decline in a single day one might ask why am I so optimistic and believe that this recent move has created huge opportunities for current traders, and more so, a second chance for those that did not participate in this last rally in both gold and silver?

The vast majority of analysts as well as seasoned traders have been waiting for the shoe to drop so to speak. Anticipating a rapid move from recent highs to dramatically lower pricing. Simply put the marketplace became too crowded. The writing was on the wall, however there was no date to accompany the memo. As I have said in many of my daily letters, at some point, which can be concurrent with a fundamental shift or no change at all. The parabolic rise meant we were likely to see both gold and silver dramatically retrace from these record levels.

That being said, the fundamental factors which have moved both gold and silver dramatically higher are uniquely different from the recession created from the banking crisis in 2008. In both cases the economic contraction and recession was followed by massive quantitative easing by the Federal Reserve and other central banks. However, in the case of the financial crisis there was an endgame, and a defined timeline because the issues which fueled the financial crisis were able to be curtailed and controlled, and any quantitative easing by the Federal Reserve had a timeline and more importantly an exit strategy.

That is not the case in this crisis. Globally we are faced with a pandemic which has no end in sight. With a daunting endgame, i.e. a vaccine that has eluded our brightest minds of all but an educated guess. As the death toll climbs and infections continue to spread worldwide.

The current round of quantitative easing has been not labeled with a number such as QE1, QE2, or QE3, but rather this round of quantitative easing has no cap on vast capital needed to achieve financial stability in the United States. Also, unlike the financial crisis the Aid packages by the U.S. Treasury Department could easily swell to $5 trillion. As such it has created the largest deficit in the history of the United States adding fuel to the already raging fire.

It is for the reasons we spoke about above that the global pandemic has challenged governments and central banks worldwide to stave off a recession, or even a depression which is why we have seen the safe haven asset class gain so much value in such a short period of time.

It is that short period of time that created a very small window for market participants and investors to rebalance their portfolios appropriately. As such there are investors in market participants that were unable to rebalance their portfolio with a heavy weight on the safe haven asset class through physical accumulation, electronically traded funds such as SLV and GLD, as well as participants in the futures market. These individuals have now been granted a second chance to do just that.

For those individuals that made the proper moves, and as we recommended to our clients last week, enabling them to repeat the process. Last week our subscribers were told to exit their positions and take profits, or move protective stops higher, locking in more profits. In either case today’s sharp decline has offered investors another opportunity, or a second chance to enter the markets once this correction concludes.

I am truly excited by the opportunities that will be available to the investment community once we see both gold and silver pricing find support and consolidate. It is clear that the fundamental factors which have been at the root of the recent and dramatic price gains in gold and silver have not changed at all. That being said I am extremely certain that this decline will conclude at some point in the future, and more importantly this will be followed by yet another leg of the historical rally in both gold and silver to challenge the recent gains.