Following the opening bell signaling the beginning of trading for both gold and silver in New York prices saw a slight rise. However, these gains were unsustainable as prices went south leading to losses in both metals. Early morning gains followed yesterday’s dramatic selloff in both precious metals. The immediate uptick was in response to U.S. treasury yields moving lower along with a weaker U.S. dollar.

Yesterday the most active December 2020 Comex gold contract lost $117.90, which is a net decline of 5.78% and settled at $1921.80. Earlier buying in the market had reclaimed pricing above the $1900 level. However, this may have simply been a dead cat bounce. 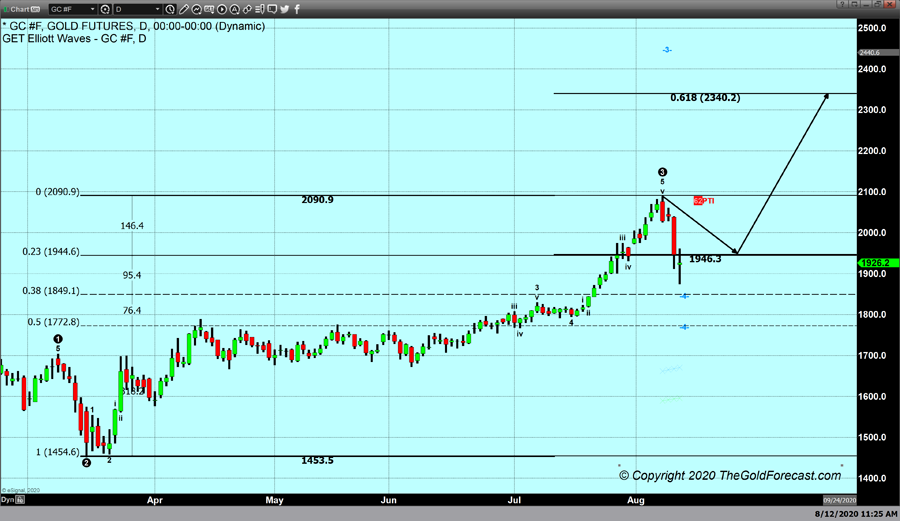 Silver futures basis the most active September 2020 contract lost a massive $4.40 in value which was a decline of just over 15%. Both gold and silver staged possibly one of the largest one-day declines in history. 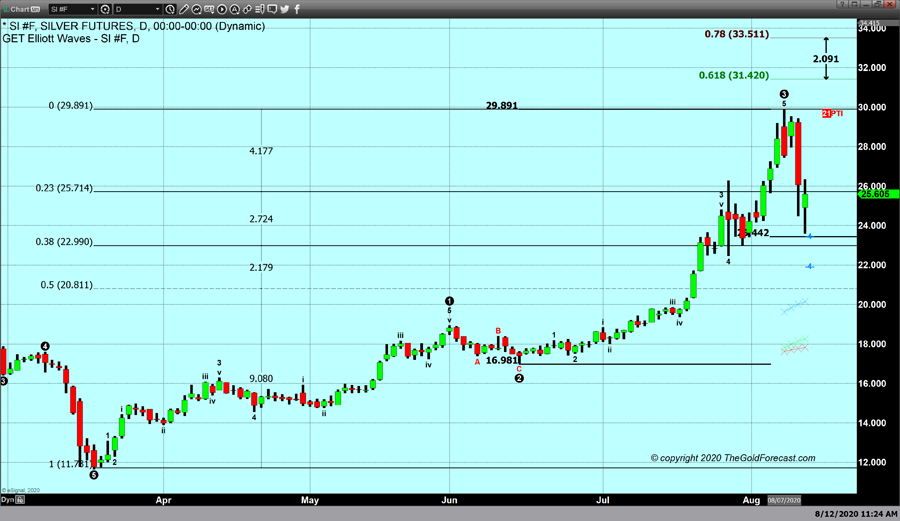 While the vast majority of market analysts and participants had been expecting some sort of a correction. But the magnitude of yesterday’s single day drawdown was much more severe than many had expected to see.

Considering that silver has almost tripled in price from the lows achieved just below $12 per ounce which occurred in the middle of March. A correction was not only anticipated, but many analysts, including myself believe that this was the selloff in the recent days was a necessary release of energy which will allow further price advances immediately following the conclusion of this current correction.

There are two extremely important questions currently being asked; first, how low could prices go in both gold and silver by the conclusion of this correction? Secondly, once the correction has concluded how high will both precious metals trade to if and when they return to rally mode?

The technical study best suited to predict possible price points that will mark the conclusion of the corrections in gold and silver is a Fibonacci retracement. This is especially true for gold because after hitting a series of multiple new record high prices, a market technician has no historical data to draw from. In the case of silver while it is not at a new all-time record price point, we can use a combination of Fibonacci retracement as well as looking at historical levels of support and resistance.

According to our technical studies it seems highly probable that the correction could go to $1849 (the 23% Fibonacci retracement level). With the lowest possibility residing at $1773 (the 38% Fibonacci retracement level). Furthermore, our studies based upon Elliott wave theory labels the last rally as a wave three, with the current correction labeled as a way number four. Using a Fibonacci extension of .618% of the third wave, we project that gold could trade as high as $2,340.

While we witnessed a severe and brutal selloff in both gold and silver yesterday, the big picture clearly indicates that there has been no real progress in curtailing the global pandemic. While multiple companies, in conjunction with multiple countries have been working feverishly to create a vaccine. In fact, a couple pharmaceutical companies have already begun first stage trials.

That being said there is a likelihood that we will see a vaccine created by the end of this year or the first quarter of next. However it must be noted that even once a vaccine is created and economies globally begin to return to a more normal state the economic fallout from recent actions of the Federal Reserve, U.S. Treasury Department in conjunction with global central banks have devalued many of the core currencies and as such will continue to support the safe haven asset class; including gold and silver.