S&P 500 plunged - what has changed and what has not

From within spitting distance of the all-time highs, stocks forcefully retreated, validating my call of a bear raid being likely to arrive soon. Just as I wrote, the bulls better tread carefully entering this week's trading – after being soundly defeated on Monday, the bears came back stronger yesterday.

Still, I closed the Thursday-opened long position for a 52-point gain, and didn't give up a single point back with another quick long (opened and exited yesterday). In similarly dicey situations that count on a reversal to bring in more profits, I like to have a reasonably tight stop-loss – not to mention adjusting it throughout the day so as to improve the open trade's risk-reward ratio.

That's what my intraday Stock Trading Alerts are all about, because an oftentimes overlooked aspect of all the profits at the beautifully rising equity curve, is how much risk the trader actually undergoes so as to reach those gains. Needless to say, I like to play it as safe as possible.

With yesterday's steep move lower being a wake-up call for the bulls, let's update the outlook wherever relevant. 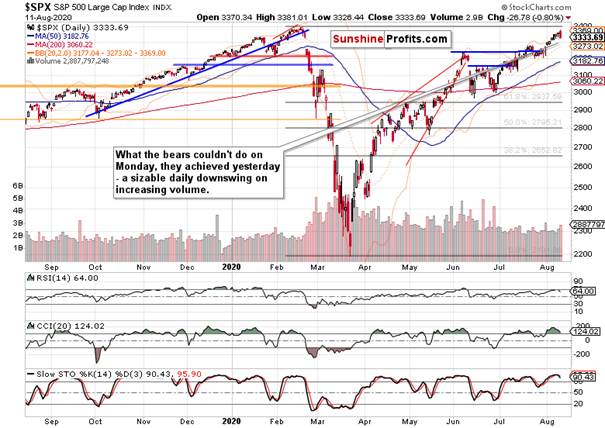 So, the downswing materialized yesterday, and the bears finally put their money where their mouth was. The S&P 500 didn't make it to the Feb all-time highs, erasing previous two sessions' gains.

The fiercer battles I called for yesterday, are in. Does it mean we've seen a reversal?

Let's turn for a fitting answer to my Friday's Stock Trading Alert:

(…) it's imperative to assess the downswing's internals, whether it is or isn't turning into something more serious and not merely temporary.

Having said that, let's turn to the credit markets.

The Credit Markets’ Point of View

What a slide, closing at the intraday lows (please see this and many more charts at my home site). The rising volume shows that the bears have been serious. Put its absolute level into context though, and two things become apparent. First, that we haven't likely seen a true reversal, and then that a return to previous highs won't be a one-day event.

Thus, it confirms the view that we've seen a setback, and the key question is how long will it take to repair the short-term damage – this concerns both the HYG ETF and S&P 500.

Investment grade corporate bonds (LQD ETF) seconded that decline, and on markedly rising volume. When quality bonds are losing breath, and faster than their riskier counterparts, it's naturally concerning. Well worth keeping a close eye on. 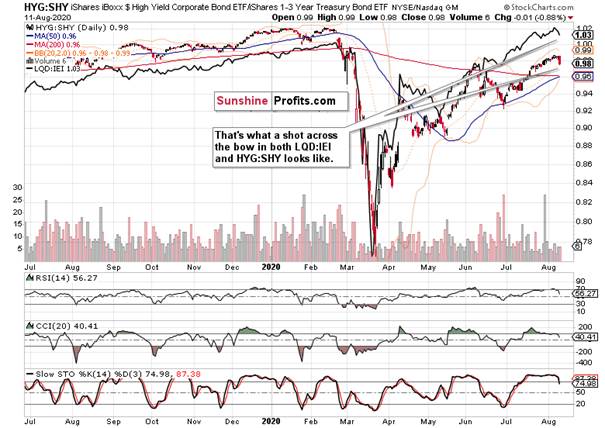 Encouragingly, longer-dated Treasuries caught a bid yesterday. They refused to extend losses during the U.S. session, which could indicate that the demand for quality bonds isn't all that far from returning. 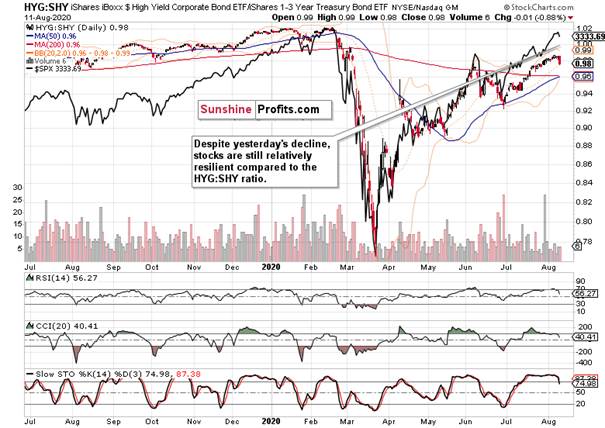 Considering how much has the S&P 500 (black line) been extended before yesterday's decline, stocks have kept up really well relative to the HYG:SHY ratio. The jury is out on whether stocks would catch up with another downswing, or whether corporate bonds would rebound, and the best course of action is watch carefully for telling signs either way, and then to take appropriate action (from the risk-reward ratio point of view).

And what about those yesterday-mentioned three good reasons why the stock rally has a high likelihood to go on – are they still valid today?

Smallcaps, Emerging Markets and Other Clues

The Russell 2000 (IWM ETF) also reversed to the downside, but actually gave up less ground than the 500-strong index. That's a bullish sign.

The daily market breadth chart doesn't bring much new to the table – the decline has been relatively orderly, and the advance-decline line thus lacks fireproof implications. 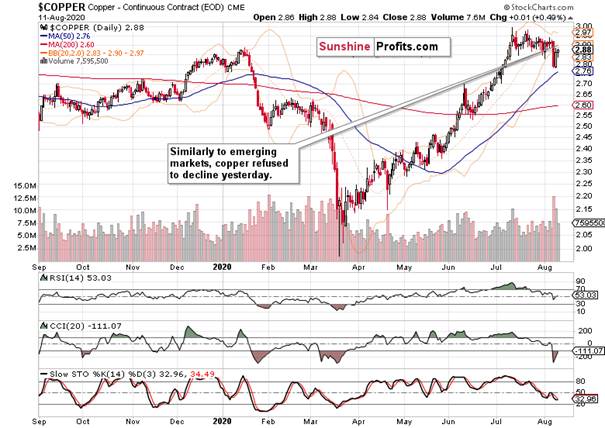 The same can't be said about copper though. The red metal is enjoying a good week, having retraced a sizable part of Friday's heavy selling. While that's constructive, the bulls can't yet sound the all clear, and the coming sessions would put to test its dead cat bounce hypothesis.

Technology (XLK ETF) declined, but not that profoundly so as to say that it's now leading the S&P 500 lower. Yes, it's ahead of the index with its yesterday's downswing, but one swallow doesn't make a spring, which is why I am not ascribing a bearish signal to this sector just yet.

Summing up, yesterday's S&P 500 downswing took some cream off the bullish spirits, and the very short-term signals are inconclusive. The deterioration in credit markets stands against solid performance in smallcaps, emerging markets, copper and also the overnight recovery in gold. Yes, it's paying off to be watching gold as closely as I do, because that's another piece to the stock market puzzle. Should the yellow metal's rebound from the overnight $1880 mark extend beyond today's close, that would be an indication we aren't facing an immediate liquidity crunch today. And its absence would take some pressure off the stock prices. In the short-run though, stocks aren't out of the woods just yet totally, but I expect them to power higher and overcome the Feb highs before 2020 is over.

Thank you for reading today’s free analysis. I encourage you to sign up for our daily newsletter - it's absolutely free and if you don't like it, you can unsubscribe with just 2 clicks. If you sign up today, you'll also get 7 days of free access to the premium daily Stock Trading Alerts as well as our other Alerts. Sign up for the free newsletter today!