The first signs that the incredible rally in both gold and silver were entering a corrective phase occurred a week ago on Friday. Since the middle of March gold had gained approximately $600, and silver almost tripled in price. This rally was fueled by the Federal Reserve along with other central banks having an extremely accommodative monetary policy and interest rates near zero. 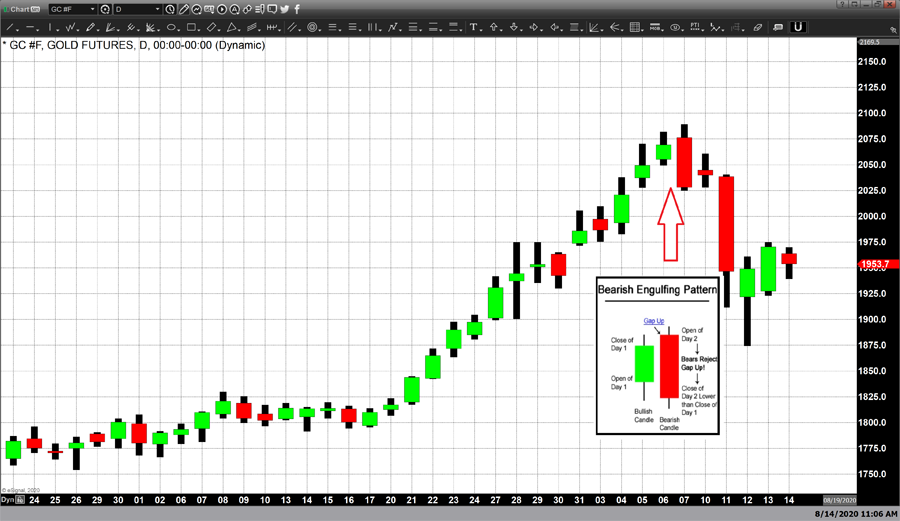 On Friday, August 7 both gold and silver prices had a moderately strong selloff. This created bearish reversal candlestick patterns in both precious metals. In the case of gold, the candlestick pattern that we identified was an “Engulfing Bearish”. This occurs after market has been in a defined uptrend and begins with a green candle (a green candle occurs when a market closes above its opening price). The following day prices opened above the close of the prior candle, and close below the opening price. Forming a red candle engulfing the entire real body of the prior candle.

In silver we were able to identify another simple two-day bearish reversal pattern called a “Dark Cloud Cover”. This pattern also occurs after a defined uptrend, and like the engulfing bearish begins with a green candle which is followed by an open above the prior close. However, a dark cloud cover will close at or below the midpoint of the prior candle. 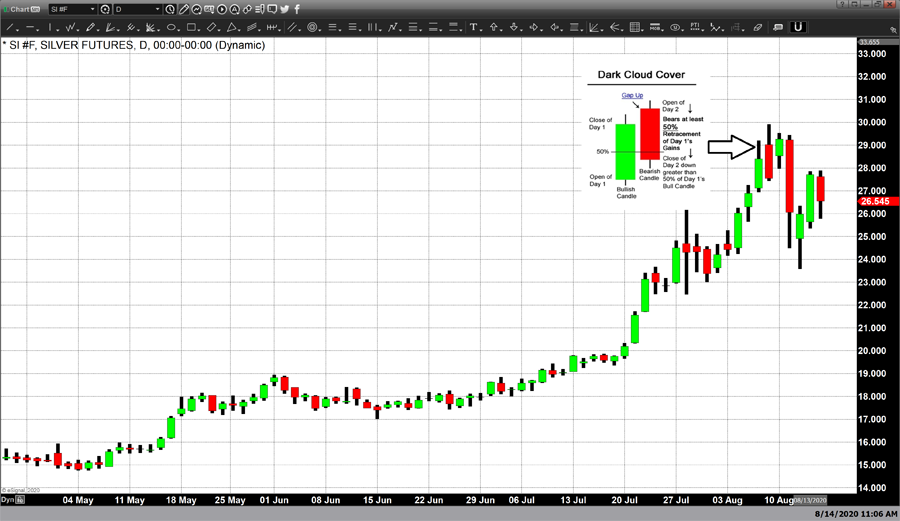 Both patterns require a confirming candle on the following day for validity. A confirming candle for a bearish reversal signal is a red candle (which occurs when a market closes below its opening price) with a lower high, lower low, and lower close than the previous candle.

On Monday the candles identified in both gold and silver had a lower high and a lower close, but lacked a lower low. However, on Tuesday of this week dramatic selling pressures took both gold and silver prices dramatically lower. Gold lost approximately $117 in a single day, while silver lost approximately 15% in value. This was followed by Wednesday’s and Thursday’s modestly higher prices suggesting a potential recovery and conclusion to the selloff which began last week. Yet, the recovery could not be sustained as market forces took both precious metals lower on the day.

Our current technical studies indicate the potential for silver to find support at $23. Gold is currently just a few dollars away from the first level of support which occurs at $1945, with major support below it at $1850. 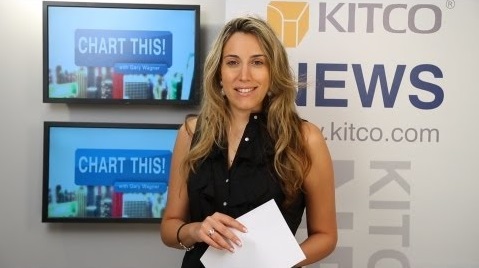 On a personal note, I submitted my first article for Kitco News in 2010. One day I received an email from Daniela Cambone asking if I wished to be interviewed. That was the beginning of my relationship with Kitco News and Daniela Cambone, the Editor-in-Chief.  It was her suggestion that we create a weekly video series called “Chart This”. Later she would suggest that I do a daily recap which she titled “After Hours, Hawaii 6.0”.

Now some 10 years later I have published roughly 2,500 articles exclusively for Kitco News. Today it was reported that Daniela Cambone is moving to the next phase in her life, and is leaving Kitco News. Although I am deeply saddened that she is leaving, I am also excited in knowing that she will continue to use her extremely polished interviewing skills and financial knowledge.

To Daniela I say; thank you, and thanks for the memories.

For  those who would like more information on our services simply use this link.

Where are the stops? Wednesday, October 28, gold and silver