The rare-earth elements (REEs) sector could become one of the most sought after, highly competitive marketplaces in the world.

Why are REEs so important?

When you think magnets, you likely think of the one on your fridge that hold up your kids’ or grandkids’ pictures and artwork.

Those aren’t the magnets I’m talking about.

The most important type of magnet is called a “permanent magnet.”

Because of their incredible magnetic properties, permanent magnets are replacing the gear box for direct drive wind turbines.

In electric vehicles, permanent magnets act as the drive unit and provide the torque and precision required for the electric motor.

In other words, if nations want to go green, they must have REEs.

It’s not just the United States that is trying to go green.

So is Europe, so is China, and so are many other developing nations.

Clean Energy and the PM’s of Rare-Earth Elements

The element that is most crucial is neodymium (which in the magnet is its own compound called neodymium-praseodymium oxide).

At this point, direct-drive turbines using permanent magnets are not economic for off-shore turbines due to weight issues, so I am not including them in the forecast.

The next chart shows the projected demand for neodymium-praseodymium oxide. You’ll see that current production of the compound is approximately equal to current consumption. 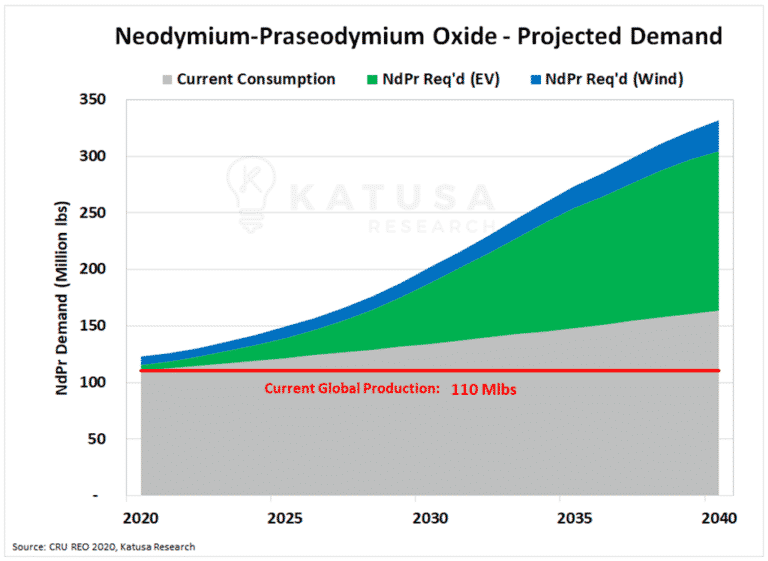 Investing in Rare-Earth Elements: A Word of Caution…

There are many of these types of charts for niche metals, where demand is projected to outstrip supply five times over.

Cobalt is an excellent example.

It’s a metal that improves the conductivity and chargeability of the lithium-ion battery.

I alerted readers to cobalt several years ago, before it briefly took off.

But then the issue arose that there was limited supply outside of the Democratic Republic of Congo (DRC). It was too expensive and too risky to bet the global EV revolution on a tiny AK-47 nation.

Outside of Russia or DRC, there is no real mine that could provide offtake to the EV industry currently.

Within 2 years, scientists discovered that by increasing the nickel in the battery, manufacturers could achieve the same positive outcomes on chargeability and conductivity.

In short, cobalt was also substitutable.

When Elon Musk said Tesla was trying to remove cobalt entirely, I took that as a huge red flag.

I alerted readers to that well in advance of mainstream investors, who likely got caught with their pants down.

I do not see this type of situation playing out with permanent magnets.

Neodymium magnets have the highest magnetic force among all magnets in the world. In addition, they offer excellent heat resistance and coercivity (resistance to demagnetization).

Toyota has done deep dives on removing some neodymium from permanent magnets and substituting with lanthanum and cerium, two “cheaper” rare earth metals. The swap resulted in lower performance and higher deterioration.

Another sign we are on the right path is that Tesla has actually moved to the permanent magnet motor—substituting away from an induction motor.

Elon Musk has continually been ahead of the curve; there is no reason to think otherwise here with the motor change.

The table below shows the differences in battery chemistry across car manufacturers, compared to the unanimous decision for motor technology and critical motor materials.

Understanding the Supply Side of REEs

The supply of rare earth ores and finished goods is perhaps the least transparent segment of the commodity space. China controls nearly the entire vertical and keeps it highly secretive.

There are no futures exchanges for rare earths, and there are very few public companies.

China is the largest producer of rare earth metals, both at the mining level and at the refined product level. It accounts for 60% of mined output, 85% of refining, and 90% of manufacturing.

The chart below shows mined output for REEs by country. 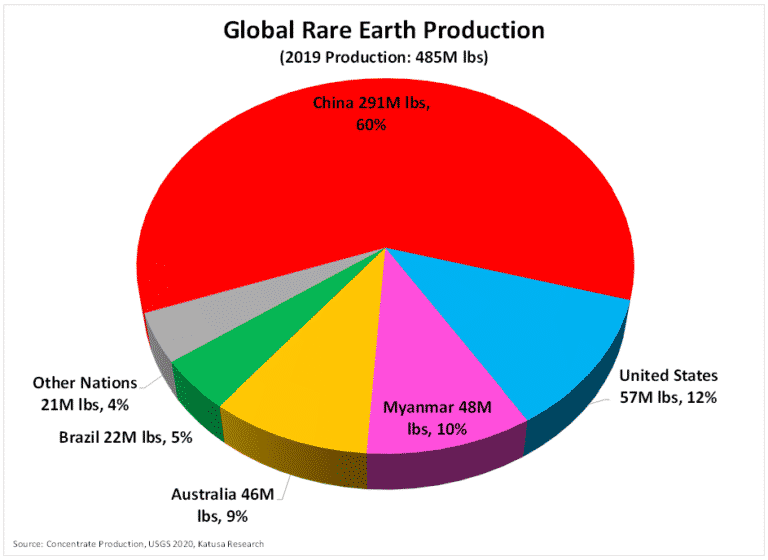 Now those who are familiar with the rare earth market will say that the United States doesn’t produce any rare earth material; we import it all. That statement is sort of correct.

The U.S. does produce a very basic rare earth concentrate. The problem is that this very basic concentrate is not useful for anything. It must be further refined into oxides or alloys, neither of which can be done on American soil.

So it all gets sent to China, which refines the concentrate and sells the finished product back to the United States.

The chart below shows United States imports by source country for rare earth compounds and metals. 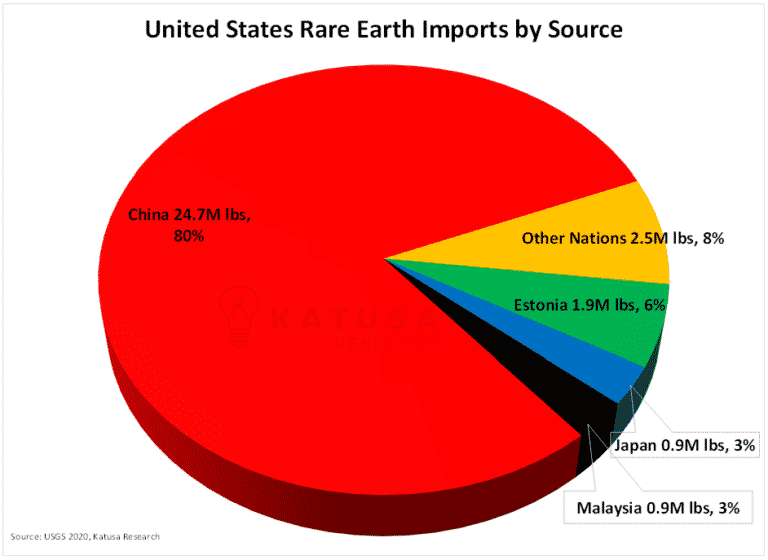 Unquestionably, rare earths are already a matter of national security for the United States.

The issue becomes an order of magnitude greater if Trump or Biden push for “Made in America” electric vehicles and wind turbines.

The United States already imports 100% of finished rare earth alloys and oxides, most of it from China.

And yes, if you have questioned yourself by this point “Can the U.S. even be capable of mining REEs”? The answer is YES, with time and capital.

And if you include +SWAP Line Nations, the answer is a definite YES.

Can you position yourself to profit from a surge in rare earth demand – you bet.

I’ve alerted my subscribers of Katusa’s Resource Opportunities to a rare-earth stock with world-class assets, a plethora of catalysts coming up and a key list of financial backers.

It’s a company I want to own in my portfolio, and the price is just about ripe for this alligator.

You can get all the details in my latest issue with a full breakdown and analysis.