So far this year, the S&P 500 is up 6%.  Considering the massive challenges we’ve faced, that’s not bad.

By comparison, gold has clocked stellar returns. It’s up 26% year-to-date.

But a small subsector of the gold space has far outpaced even gold’s returns.

To be fair, these can be some of the most volatile equities on the planet.  Of course, the rising tide of a secular gold bull market can go a long way to moderate some of that risk.

Also, allocating capital wisely and across several explorers can help mitigate the hazards these companies might present.

The fact is just one outstanding success, even alongside a few other mediocre performers, can still lead to life-changing returns for investors.

With gold continuing to consolidate, as I’ve been saying to expect in my recent articles, now is a great time to consider where to invest for the next leg up.

Now if that doesn’t grab your attention, I’m not sure what will.

The fact is, the leverage offered by junior gold companies is downright explosive.  Some individual junior gold explorers are up over 1,900% or more in that time frame.  That’s testament to the kind of wild upside they can offer.

Needless to say, such high potential reward is commensurate with high risk.  Explorers can burn through lots of cash securing land rights, permits and drilling all to turn up nothing.

Other times, big success is followed up with big duds.  As well, the commodity cycle can work with or against.  That’s why rising gold prices are so important for gold explorers.

Some discoveries that lead to deposits could be uneconomic at $1,400 gold, but highly profitable at $1,800.

Gold’s 4-year bear market from 2012 to 2016 forced miners to dramatically cut costs, sell assets, and put some mines on care and maintenance while expansions were put on ice.

Exploration was one of the first victims, which has led to a dearth of discoveries.  But with gold back to marching higher on strongly sustained fundamentals, miners are realizing they need to replace depleting reserves.

As a result, successful explorers become takeover targets as they expand known deposits and discover new ones.

Here are three companies that have the right people and are looking in the right places to potentially produce stellar results.

Nevada was ranked as the world’s third most attractive jurisdiction for mining investment by the Fraser Institute this past February.  Nevada is exceedingly attractive with its second largest gold reserves in the world and 23 major gold mines, all while producing 5 million ounces of gold annually.

If it were a country of its own, it would be ranked as the 4th largest gold producing nation globally.  Considering its stable tax regime, robust legal basis, qualified labor, streamlined permitting and developed infrastructure, there are many reasons to look for gold in Nevada.

Peloton Minerals (CSE:PMC; OTCQB:PMCCF), at CAD $10M, is a true nano cap junior.  Despite no resource so far, its quality properties and outsized potential make up for the higher risk profile.

In 2011 Newmont acquired Fronteer Gold through a $2.3 billion takeover for its Long Canyon project.  Also on the Long Canyon Trend is Peloton’s Golden Trail Project, located just 50 km north of Newmont’s Long Canyon mine. Golden Trail is 100% owned by Peloton with no royalties and comprises an 880 acre claim package.

The initial drill program in 2019 delivered 82% of footage mineralized above the detection rate for gold and silver, with a range of 0.005ppm to 0.095ppm Au and 0.5 to 72.0 Ag, and all holes bottomed in mineralization.  Golden Trail should see 2,000-3,000 feet of further drilling this fall, going deeper than last year’s efforts, and testing 3,000 feet to the south for Carlin-Style hydrothermal anomalies.

7 kilometers due west is the Texas Canyon project. Armed with good historical data from the previous operator, management is advancing is drilling permits to be able to drill this project by next spring.  An NI 43-101 technical report is being compiled to publish data and set out recommendations for further steps.  A project summary-abstract was published in the 2020 Geologic Society of Nevada’s virtual symposium.  That could help attract a JV partner to participate and advance Texas Canyon. 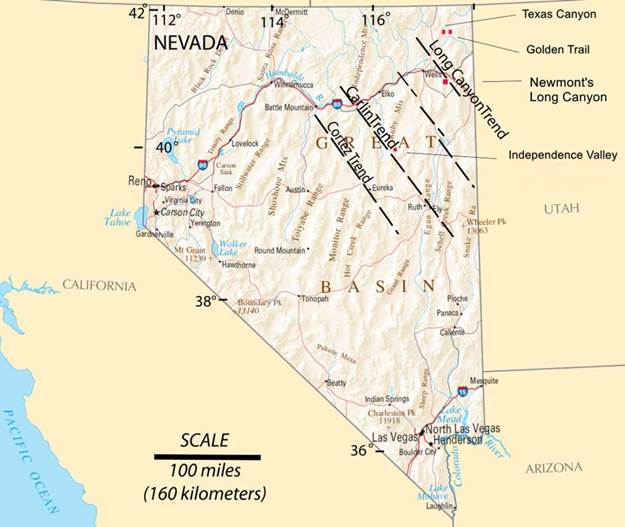 Independence Valley is Peloton’s third Nevada project, this one located on the southern extension of the world-renowned Carlin Gold Trend.  It’s the largest concentration of gold deposits in North America, with over 40 deposits discovered along the 64 km-long trend.

Located in Elko County, Independence Valley is comprised of 1,160 acres and within the historical Spruce Mountain mining district which hosted many historic base and precious metals mines since the 1840’s.  This project hosts the largest untested Rhyolite Dome int the Spruce Mountain district.

The 2020 drill program will comprise 2,000-3,000 feet, and geophysical modelling of magnetic and CSAMT data have identified three structures within the dome complex that are recommended for testing.

Catalysts this year and early next will be follow up exploration results on Golden Trail and Independence Valley, plus the technical report on Texas Canyon.  As well, potential activity on SBSL could all generate plenty of news flow over the next 6-12 months with exciting potential.

Also operating in Nevada is Nulegacy Gold Corp. (TSXV:NUG; OTC:NULGF), whose market cap has soared to CAD $103M in recent months.  The company holds a 100% interest in the Red Hill project, located on the prolific Cortez Trend, which hosts three of Barrick Gold’s largest and highest-grade Tier 1 Gold deposits: Pipeline with 21M oz. at 2.5 grams/tonne, Cortez Hills with 15M oz. at 4.1 grams/tonne, and Goldrush with 10M oz. at 10 g/tonne. 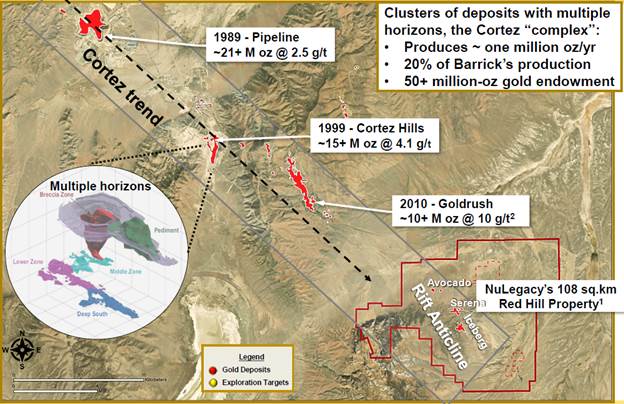 Its nine-member technical team, most of whom worked at Barrick, have all made significant direct contributions of some kind towards the discovery of over 50 million ounces in Nevada’s Carlin and Cortez Trends.

An initial 16 hole – 11,500 meter drill program on the Rift Anticline this fall, followed by 4-5 holes in the winter and more in the spring should produce some steady news flow.

Nulegacy is aiming to prove up a Tier 1 asset, then look to a merger or JV to develop towards production.

This is elephant country, and that’s what Nulegacy is hunting for.

O3 Mining Inc. (TSXV:OIII) is a larger junior gold explorer with a market cap of CAD $142 million.  Their portfolio of assets in the provinces of Quebec and Ontario, Canada, two of the better mining jurisdictions anywhere, span more than 460,000 hectares.

As part of the Osisko Group of companies, O3 is consolidating exploration properties, aiming to become a multi-million ounce high-growth company.   In Quebec, the 4th most attractive mining jurisdiction on the planet, O3 controls 61,000 hectares in historically productive Val d’Or and over 50 kilometers of strike length on the Cadillac-Larder Lake fault.

Val d’Or, a district responsible for producing over 30M oz. of gold, holds O3’s flagship Marban project on the Malartic Property, representing 75% of the company’s total resources at 2.5 M gold ounces.  That’s up by 40% since the 2016 resource estimate.  More than 600,000 meters have already been drilled, with over $60 M invested in the ground. A large 40,000 meter drill program is ongoing to extend the deposit.  There is a lot of brownfield upside potential. 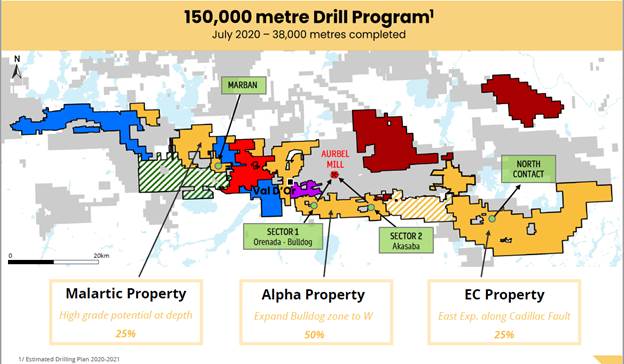 A positive Preliminary Economic Assessment was just delivered on Marban, boasting an after-tax NPV of $423M, after-tax IRR of 25.2%, a 4-year payback and 15 year mine life.  The average cost to produce the gold will be a respectable $822 per ounce, offering nice margins.

In Ontario, the Golden Bear Group of properties includes the Garrison project which hosts 2M oz. gold in three main zones.  It’s a potential consolidation play as bigger neighbors include Kirkland Lake, Pan American and Moneta Porcupine, some with established deposits of multiple millions of ounces.

As a consolidator/developer/explorer, O3 doesn’t hesitate to joint venture or sell off properties it deems non-core.  This allows it to unlock value, while retaining participation in the case of JVs.

Junior gold explorers come in all sizes and varieties.  Given their nature of high risk, it makes sense to build a portfolio of at least 5 names.  It’s also wise to allocate small amounts and to add to positions over time.

But the moon-shot potential is undeniable, especially in a secular gold bull market that’s starting to heat up.