Gold stocks are cheap, but not for long

It’s not too late for you to buy gold and gold stocks on the cheap.

If you haven’t already, you may want to seriously consider it.

That move might set you up for a run over the next few years that could turn into your single best investment…ever.

You see, gold stocks are churning out some serious profits that are likely to just keep getting better.

It’s true that, back in August, gold set a new all-time high at $2,067 on huge demand.  It has since pulled back, but still managed to set another record:  its eighth consecutive quarterly gain.

Despite all the fundamental and technical support that will push gold higher, I think we could still see some more near-term weakness/consolidation before the metal finally returns to rally mode.

And that buys you a little more time to determine your allocation.

Gold Strong, But Dollar Could Weigh Near Term

You know gold’s becoming mainstream when, as recently reported, Costco Wholesale (in the U.K.) is now selling gold and silver bars in their stores.

But if you read some of the media covering this story, you’d think gold is a dangerous investment option to be avoided at all cost.  Yet gold generated more than 4 times the returns of the S&P 500 over the last 20 years.

Gold (and silver) remain obvious standouts against nearly all other asset classes so far this year. 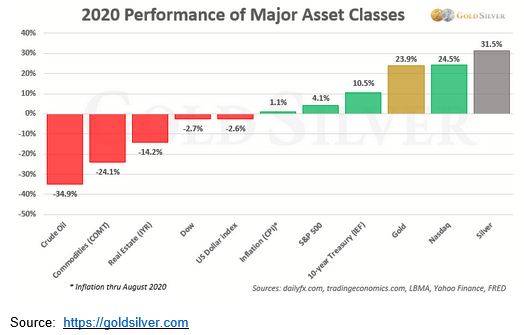 I expect more strength to come later in Q4, though gold’s been pausing since its early August highs.

There are two main reasons.  First, gold enjoyed a massive rally from its March lows, and needs to digest those gains.  Second, the US dollar’s runup from its late August lows may not be finished. 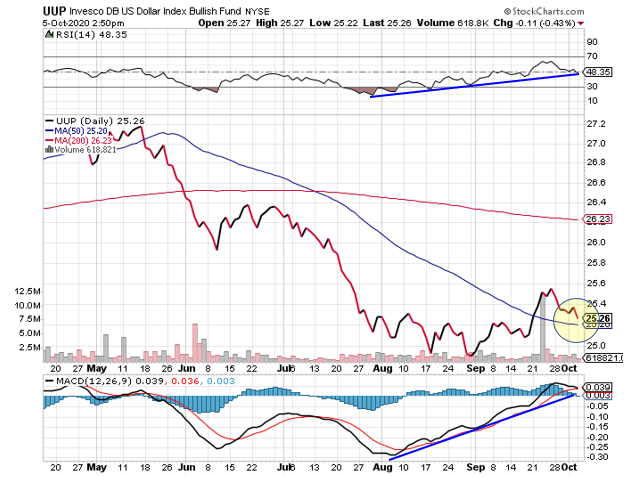 We could see UUP come down to “test” the 50-day moving average, but then renewed strength could take the dollar higher.  Although the MACD appears to be pausing, the RSI near 50 has room to run before becoming overbought.

Meanwhile, “smart money” dollar hedgers are the most bullish they’ve been since 2013. 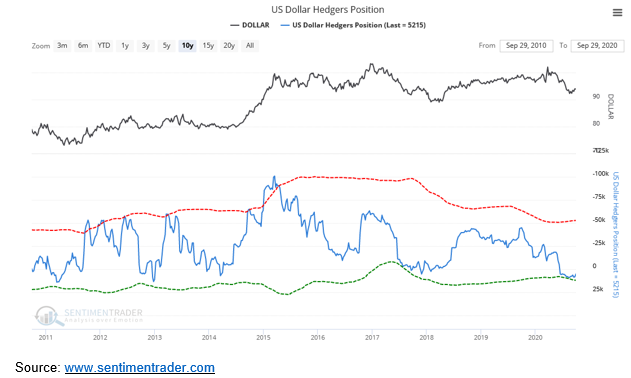 With the second Covid wave rapidly growing and the U.S. election less than a month away, I wouldn’t discount the appeal of the dollar as a near-term safe haven.

Strength from the greenback could dampen gold and gold stocks temporarily.

On a historical basis, despite recent strength, gold stocks remain a true bargain. 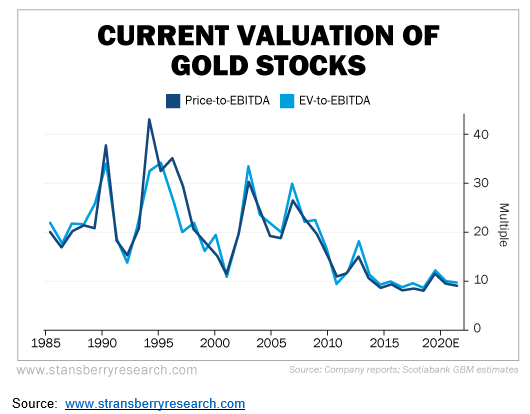 On the fundamental side, gold miners had a superb Q2, thanks to much higher gold prices and despite Covid-related shutdowns.

Indeed, I would venture that Berkshire bought into Barrick Gold precisely because it sees just how lucrative the sector has become and is likely to remain.

Even Ohio’s Police and Fire Pension Fund has decided to move towards a 5% gold allocation in an effort to diversify and hedge against inflation.  That speaks volumes and is likely to lead to many more institutional investors leaning in gold’s direction.

And now, with gold prices managing their 8th consecutive quarterly gain, I expect gold miners’ Q3 results to be very robust.  That’s not only thanks to sustained high gold prices, but also because most gold mining has returned to full capacity while following strict Covid protocols.

Another consideration is how gold and gold stocks could turn out to be “sticky” money.  By that I mean once investors make a new allocation, especially for diversification and inflation hedging purposes, they may choose to hold and not sell, even through corrections, as the bull market progresses.

One noteworthy example is the behavior of Robinhood account holders. 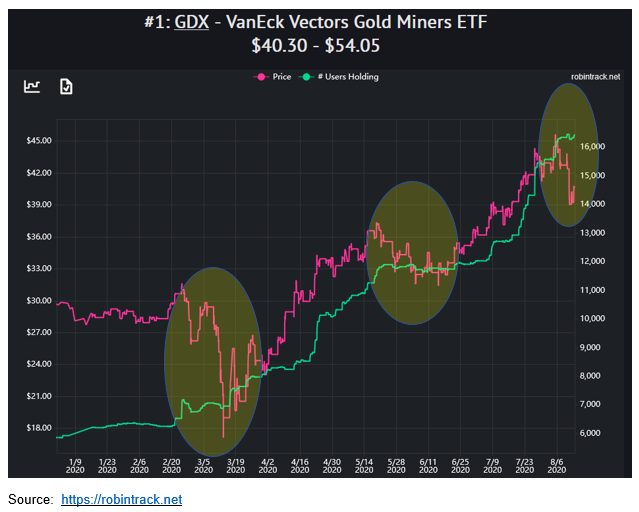 There were three standout corrections this year in March, May and August.  Each of those times GDX (pink line) went through a clear selloff.  And yet the number of holders hardly missed a beat, typically remaining very steady (green line) through those corrections.

As the corrections subsided, more buyers came in.  This suggests that, at least millennials, are buying and holding gold stocks with the conviction that this bull market has much higher to run.

On a price-to-book value, the gold stocks over the past five years have traded at the lowest multiples ever. As stock prices have gone up, so too have the book values of mining companies. At 1.3 times book, the major miners are trading at a better than a 40% discount to their trading range from the early 1980s to 2013.

Even more compelling is price-to-cash flow: Other than the last quarter of 2018, the gold stocks have never been cheaper! For most of the past 35 years, gold stocks have traded at two to three times the current valuations. And when the gold price is strong, multiples tend to expand, so it would be usual were valuations above average today.

In all likeliness, that’s what Berkshire Hathaway recognizes.

Now it’s your chance to see it too:  gold stocks are cheap…for now.

Despite bond rally, real rates are still negative and that is good for gold - WGC's Perlaky