'Tis been a curious pricing patch for Gold. It has just recorded back-to-back up weeks respectively of +2.1% and now +1.7%, for a combined two-week total of +3.9% (+72 points). 'Course as we oft quip, change is an illusion whereas price is the truth. And in settling out the week yesterday (Friday) at 1936, the truth finds such price below every weekly settle from three through ten weeks ago.

"Curious" indeed that -- despite Gold's apparent might across the last fortnight -- through these past three weeks, our near-term regression trend still remains negative, as through the past seven weeks does the medium-term weekly parabolic trend remain Short. All, of course, within the broader 25-month trend being up... well UP!

"But you also said it's different this time, mmb..."

So 'tis, Squire. Any case for dismissing Gold to one's relics collection (let alone to the dustbin for garbage collection) finds no footing whatsoever. Given the comparably massive growth in StateSide money supply (M2 measure) during just this year -- +22.3% -- one cannot hide from this debasement ride. With data as sourced from the Federal Reserve Bank of St. Louis, it shan't be starker than this: 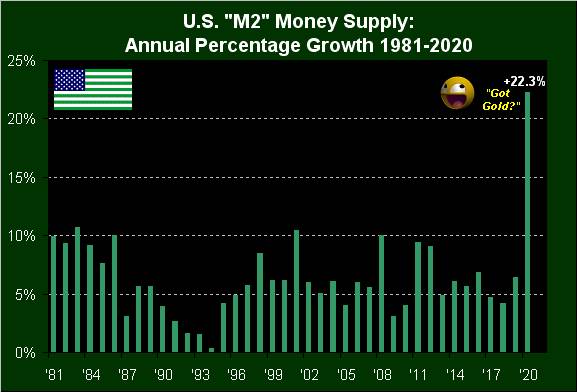 Difference ever so defined this time, Squire. And that's just the currency's Debasement. Account, too, for the irrepayable Debt and unclaimable Derivatives, and those 3Ds are the de facto firm foundation for Gold.

'Tis therefore no surprise in turning to Gold's weekly bars that the slope of the diagonal trendline remains steadfastly UP! However, those now seven red dots of parabolic Short trend remind us of this medium-term negativity, the "flip to Long" price at 2052 now some 116 points above the present price of 1936. Gold's expected weekly trading range is 82 points and the daily 32 points; thus barring some robust thrust in the new week, Short shall still be the stance when we next herein glance. But as we're wont to say, "Shorting Gold is a bad idea". Nevertheless, we've again denoted the 1830 foothold for some guidance should downside renew:

As to the long-standing markets' axiom that "The trend is your friend", (until it reaches the bend, thank you JP), have a look at the 300-day moving average (bright blue line) in this next graphic of Gold's daily closes during this decade. 'Course the contra-minded technician would opine that the gap of price above average is far too great such that Gold ought be sold. Tell that technician, too, 'tis different this time, the near- and medium-term negative trends notwithstanding:

Economically, just five metrics came into our Barometer this past week, but 'twas one replete with FedSpeak. To wit: FedChair Powell reiterated concern of "tragic" economic risks should there not be further fiscal support; St. Louis FedHead Bullard recommended The Bank stay accommodative even should the post-COVID recovery be robust; Chicago FedHead Evans hit with hindsight that understanding inflation as we now do suggests that the rate hikes from 2015-2018 were somewhat undue; New York FedHead Williams noted that The Bank's buying of debt is already aggressive at an "extremely high level"; and Boston FedHead Rosengren, in opposition to pre-COVID rate cuts, inferred their downside consequences as having exacerbated the economic slowdown.

Then skip over the Pond and we've ECBHead Lagarde motivated monetarily for further stimulus injection, moving That Bank's key interest rate further sub-zero, ("We'll pay you take our money, please..."). Leap further over to China and we find the Renminbi having just leapt the most since 2016, the recovery there and its markets "buoyed" by the potential for a President Biden. Which rather flies in the face of our Headline of the Week, courtesy of Dow Jones Wires: "The Stock Market’s Leaders Appear Most Vulnerable to Biden’s Tax Plan" On which side of that trade are you? (Got Gold?)

Putting a worldwide cherry on top it all, IMFHead Georgieva said 'twill be a long climb to recovery for the global economy. But the organization is not disposed to disposing their now higher-valued Gold as a relief effort. (And we have it on the "q.t." 'tis best not to be of the opposite opinion to that of Kristalina; just sayin'...)

All-in-all, the Econ Baro dipped on rather minimal input: the only mild highlight was an increased ISM Services reading for September; otherwise, August's Trade Deficit expanded to its most negative level in 14 years, the month's Consumer Credit shrank for the fourth time through eight months of 2020, and Wholesale Inventories backed up. Thus backing down a bit went the Baro:

Still, moving up more than a just bit as noted of late have been the precious metals, albeit as stated their respective near-term regression trends remain negative. Here below we've Gold, the left panel being price's last three months-to-date of daily bars. The recent price bounce has curtailed the falling of Gold's "Baby Blues", those dots of trend consistency; however, the red line firmly shows such 21-day trend as down. Heartening however for the Gold Bull in the right panel we find price at the top of the 10-day Market Profile, the more dominantly-traded prices as labeled: 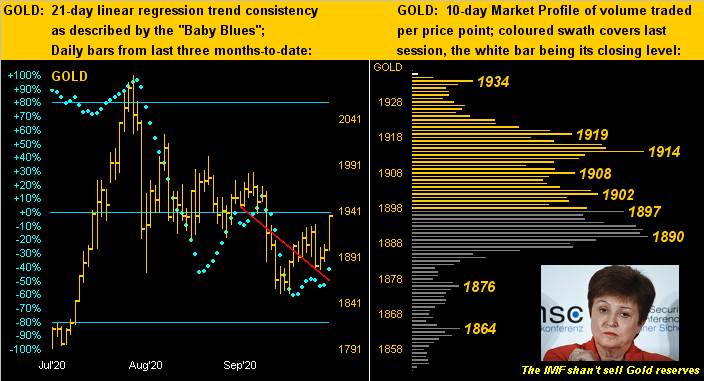 As for Sister Silver, who in each of the past two weeks has respectively risen +3.8% and +6.0% (all-in +10.1% or +2.32 points), the percentage increases are indicative of Silver's usual leverage over the yellow metal, yet their charts appear much the same, with the white metal's daily bars, dots and negative red trendline on the left, but with price atop the Profile on the right. As noted earlier in Gold's weekly bars graphic, the Gold/Silver ratio is at present 76.5x, well off the low-100 readings we'd been seeing, yet still above the millennium-to-date average of 66.1x: 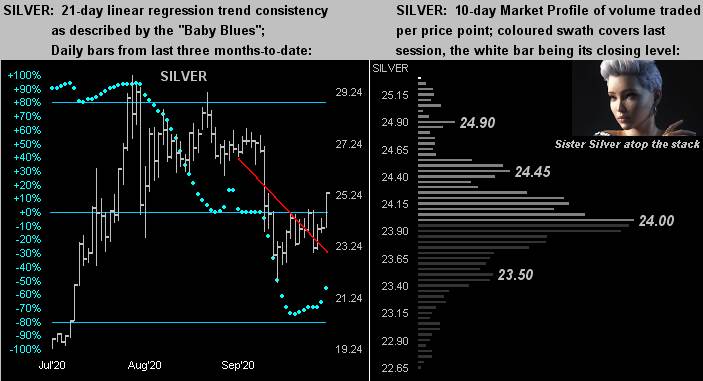 Next week 'tis again "Game On!" for the Econ Baro with some 17 data points due. And shall Gold continue to fly through negativity's guise? Or instead retreat in offering more bargain buys? Either way, being on board with Gold is wise! 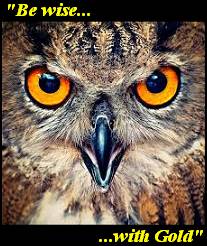