Gold recovered roughly one third of yesterday’s sharp selloff in trading today. As of 4:20 PM EST gold futures basis the most active December 2020 Comex contract is currently fixed at $1904.80, which is a net gain of $10.20 (+0.54%). Today’s gains are partially the net result of dollar weakness as well as market participants bidding the precious yellow metal higher.

These gains occurred in light of a continued stalemate and inability for the House and Senate to agree on a greatly needed fiscal stimulus aid package. Comments made by the U.S. Treasury Secretary Steven Mnuchin were pessimistic in regards to a fiscal stimulus package prior to the presidential election.

Secretary Mnuchin spoke at a conference sponsored by the Milken Institute in which he said, “At this point getting something done before the election and executing on that would be difficult, just given where we are and the level of detail, but we’re going to try to continue to work through these issues.” 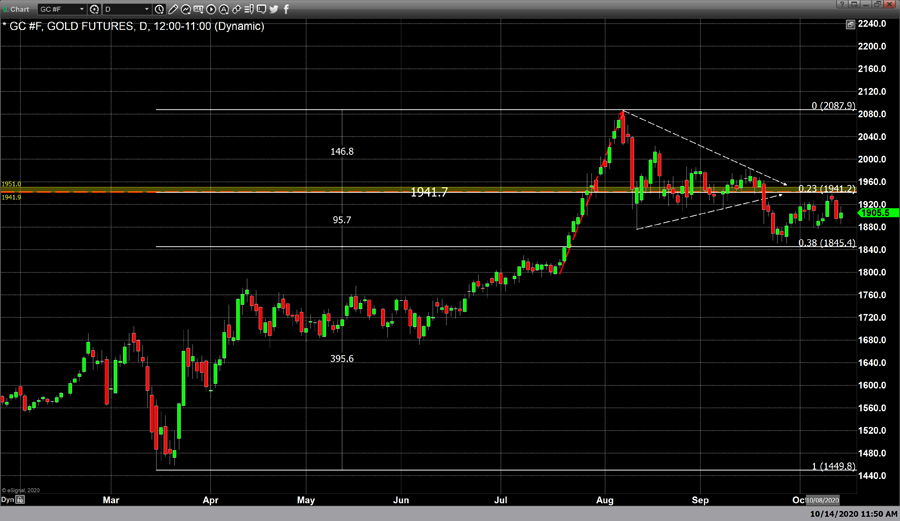 However, even though the hopes for a fiscal stimulus package have dimmed, gold recovered from yesterday’s $30 decline as the increase in new cases is causing curfews and lockdowns in Europe, as well as spikes in parts of the United States. Reuters reported that, “France imposed curfews while other European nations are closing schools, cancelling surgeries and enlisting student medics as overwhelmed authorities face the nightmare scenario of a COVID-19 resurgence at the onset of winter.” In Europe new cases of the virus are approximately 100,000 per day, which is almost double of the reported daily cases in the United States which is currently at 51,000.

According to John Hopkins University the total number of global cases is now at 38,344,196, with well over a million deaths globally. In the United States there were 52,406 new cases reported as of October 14.

The fact that the number of cases continues to rise globally diminishes the likelihood of a quick economic recovery. The uncertainty created by the pandemic and the upcoming presidential election could certainly be supportive of gold pricing at least until the presidential election takes place next month.