The latest unemployment numbers came in higher than most economists expected. Alarming headlines about the blip up of 53,000 new claims over the previous week roiled markets. But it’s the shape of the curve that matters most. The V-shaped recovery in the US exists only in the irrationally exuberant minds of momentum-chasers trading on Wall Street. The actual curve for Main Street is clearly an “inverted square root” shape. 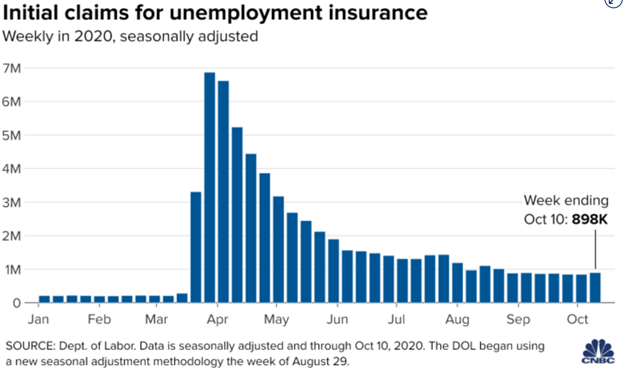 What makes this a serious problem is that, unlike a normal square root sign, the flat part to the right is at a lower level than where we started.

This is a stalled economic recovery.

It’s stalled at a level considerably lower than pre-COVID-19 shutdown levels. That’s not just bad news for this week; it shows the kind of enduring damage done to the economy that I’ve been writing about all year.

The steady, historically high level at just under a million jobs lost per week warns of more bad news to come.

And that’s not even counting a second wave of shutdowns, as we’re seeing in Europe today. Whatever any of us believe about the disease itself—or the official numbers reported—case counts are increasing in the US. 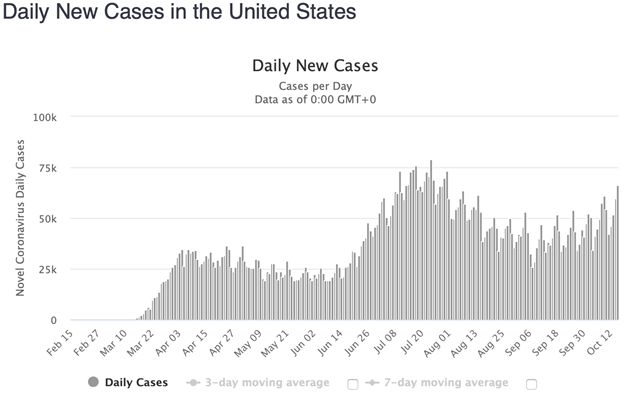 Many people will react to this trend—and so will governments. Sure, Trump says he won’t shut the economy down again, but if enough people panic, he might go back on that. Even if he doesn’t, state governments can and will act independently.

If Biden wins, I’d expect him to shut everything down and put masks on everyone and their pets, if only to be anti-Trump.

A vaccine that comes through clinical trials with flying colors would help calm things down, but three trials are already halted. Even if great news on this front were announced before the election, mass deployment would still take a long time. And it’s already getting cold in much of the US now.

I want to be clear that I’m not making any medical predictions here.

I’m saying that the harm already done by the shutdowns is severe and enduring—as the square root chart above shows.

Whether it should be so or not, I don’t see a new normal settling in until COVID-19—or the fear of it—is well behind us.

Given the harm already done, the stalled recovery, and the increasing evidence of another wave of harm ahead, I don’t see the nightmare ending anytime soon.

This means that the COVID-19 recession could easily turn into the Depression of the 2020s.

It’s also important to remember that while I’ve focused on the US in this analysis, based on the latest jobs numbers, the same forces are in play worldwide.

What could prevent the Greater Depression?

An even greater flood of easy money might put it off.

I say “might” because it could also cause a panic and have the opposite of its intended effect.

But let’s say that doesn’t happen. At least initially, I’d expect the torrent of easy money—much of it going directly to unemployed consumers—would appear to prompt more recovery. That would only be an appearance. A resuscitated patient who achieves a stable condition on full life support can’t really be called recovered.

Still, the appearance of recovery could last longer than fiscal conservatives imagine possible.

Key Point: Whether it’s Trump’s $1.8 trillion or Pelosi’s $2.2 trillion, the next installment of a couple trillion in easy money is on the way.

And that’s just the next installment. Whoever wins the US election coming up, no majority is going to want to pull the plug on the life-support machines.

Even the Fed is encouraging politicians to go ahead and spend all they want. Powell says there’s no risk of overdoing it.

What are the investment implications?

New nominal all-time-highs for gold and silver may not happen tomorrow, but I’m confident of this than ever. And that means that I’d see any significant weakness we get in the near term—especially if there’s another Wall Street meltdown—as a buying opportunity.

But what if the powers that be lose control and the world really does plunge into the Greater Depression—wouldn’t that be deflationary?

Not necessarily. With fiat currency-creation in hyperdrive, we could see a decade of stagflation on a scale that dwarfs the 1970s. And even if it was deflationary for a time, gold—a form of money—should accrue purchasing power. It did in the last Great Depression, with a little help from FDR.

I can’t honestly say I know how all this will play out—and I wouldn’t believe anyone who claims to know for sure.

But the bottom line for me is that I don’t see any credible bear case for gold.

I intend to remain long gold, silver, and related stocks.

I’m building my cash position so I can buy more if we should be so lucky as to have a chance like last March to do so at bargain prices.