Gold production in Ontario in Q2 2020 declined by 17% over Q2 2019 due to suspensions related to COVID-19 crisis. Detour Lake was the largest gold mine in Ontario.

Ontario is the largest gold-producing Canadian province or territory. According to the Ontario Mining Association, the region produced 73,733 kilograms of gold in 2019, which equates to 2,371 thousand troy ounces of gold, or 42% of total gold produced in Canada. 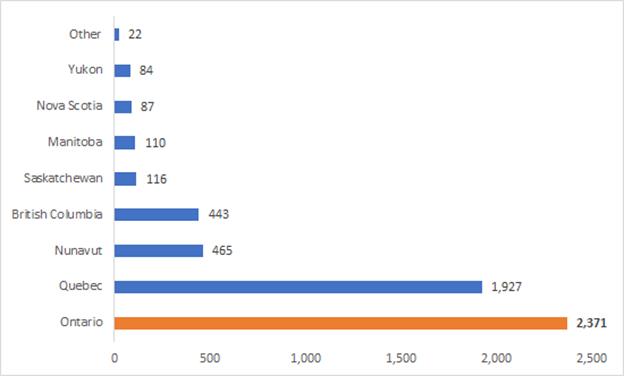 Based on available quarterly corporate reports, Ontario produced 528 kozt of gold in Q2 2020 from primary gold mines and as a by-product of base metals and platinum group metals operations. This significant 17% decline over the corresponding period of 2019 (638 kozt) was primarily caused by suspensions related to COVID-19 crisis.

Production at Ontario's biggest Detour Lake gold mine in Q2 2020 totalled 132 thousand troy ounces (kozt), which involved processing 5,655,992 tonnes at an average grade of 0.79 g/t at average recoveries of 91.7%. Production in Q2 2020 was 12% lower than in Q2 2019 mainly due to feeding lower grade stockpiled material to the mill during reduced operations. Kirkland Lake completed acquisition of Detour Lake on January 31, 2020.

Gold production at second biggest Newmont's Porcupine gold mine increased by 64%, from 53 kozt in Q2 2019 (results have been included from the date of Porcupine acquisition by Newmont on April 18, 2019) to 87 kozt in Q2 2020. Gold output growth was primarily driven by higher ore grade mined from Borden, which achieved commercial production in the fourth quarter of 2019, and higher mill recovery from the lead nitrate circuit.

Fourth-ranked New Gold's Rainy River produced 49 kozt of gold in Q2 2020, which was lower than plan and 26% less than in Q2 2019 (66 kozt). Production was impacted by reduced mine productivity due to COVID-19 related suspension, resulting in the processing of a higher than planned proportion of the medium grade ore from stockpile and pit rehandling. The averaged grade processed for the quarter was 0.78 grams per tonne at gold recovery of 89%.

Pan American Silver's Timmins operations have seen a 23% decrease in gold output in Q2 2020 due to the mines operating at approximately 90% of planned capacity in order to accommodate new protocols related to COVID-19, as well as lower grades that are partially attributable to encountering more ore but at lower grades in the mined areas at the Bell Creek mine and to mine sequencing at the Timmins West mine.

Evolution Mining's Red Lake mine produced 27 kozt of gold in its first quarter under Evolution ownership, a 33% decline over Q2 2019 results (results of operations for Red Lake have been included from the date of its acquisition by Newmont on April 18, 2019), but more than a guidance of around 25,000 ozt. A workforce restructure took place in June, reducing the number of full-time employees by 114 to 740 people. Underground development rates continue to ramp up with 1,036 metres achieved in

the month of June 2020. Evolution's transformation plan is ahead of expectations to restore production to above 200,000 ounces per annum at an AISC of less than US$1,000 per ounce.

Alamos Gold's Young-Davidson mine produced 23 kozt of gold in the second quarter of 2020, a 49% decrease from the same period in 2019 due to lower tonnes mined and processed. This reflects the planned downtime of the Northgate shaft starting in early February to complete the tie-in of the lower mine. Ore was trucked to surface from the upper mine during the downtime, which resulted in lower tonnes mined during the quarter and the first half of the year.

Another Alamos Gold's Island Gold mine produced 19 kozt of gold in the second quarter, a 53% decrease from the comparative period in 2019 (40 kozt), reflecting lower mining rates and grades mined and processed. Operations were temporarily suspended starting March 25th through the end of April as a result of COVID-19. The Company began a phased restart of operations at the beginning of May, with mining and milling rates increasing to average above 1,200 tpd for the month of June.

*Results have been included from the date of its acquisition by Newmont on April 18, 2019.

** The results of operations for Red Lake have been included from the date of its acquisition by Newmont on April 18, 2019. 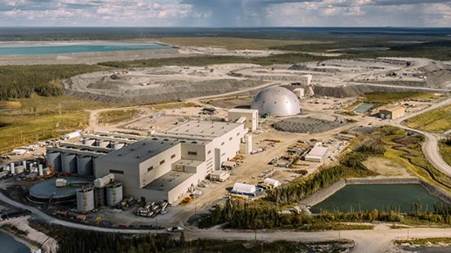 The operation is situated in the area of the historic Detour Lake open pit/underground mine operated by Placer Dome which produced 1.8 million ounces of gold from 1983 to 1999. Detour Gold acquired the property in January 2007, completed a feasibility study in June 2010 and commenced gold production in February 2013. The Detour Lake operation has a mine life of approximately 22 years with an average gold production of 659,000 ounces per year, and includes the development of the West Detour project which is currently being permitted. Kirkland Lake Gold completed acquisition of Detour Gold on January 31, 2020. 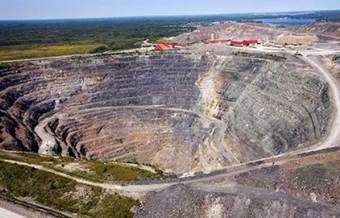 Porcupine Underground & Open-Pit Gold Mine located in and around the City of Timmins.

Porcupine district has produced more than 67 million ounces since 1910. Currently, approximately 60% of the gold comes from the Hoyle Pond underground mine, where mechanized cut and fill and longhole mining methods are used to extract the ore, and the remaining ore comes from the Hollinger Open Pit mine. The Dome Underground mine ceased operations in 2017. 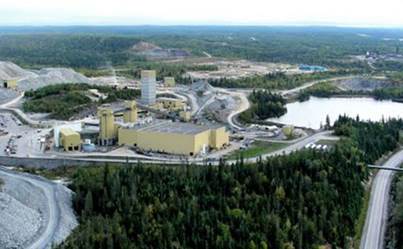 Hemlo gold operation consists of David Bell, an underground mine, and Williams, an underground and open pit mine, located approximately 350 kilometers east of Thunder Bay, Ontario.

The Williams and David Bell mines share milling, processing and tailings facilities where ores from the two mines are co-mingled and fed to a standard grind, leach and carbon-in-pulp extraction mill. 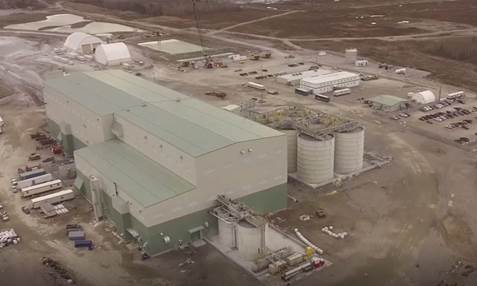 Rainy River Open Pit / Underground Mine is located 65 km northwest of Fort Frances, Ontario, in the southern half of Richardson Township.

Rainy River commenced processing ore on September 14, 2017 and completed its first gold pour on October 5, 2017. Commercial production followed on October 19, 2017. Development of the underground mine began in the second half of 2018. 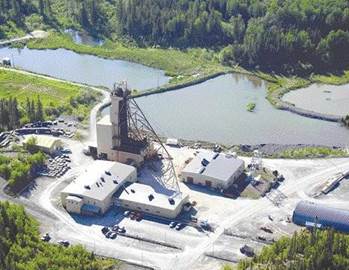 Macassa Underground Gold Mine is located in the Town of Kirkland Lake, 580 km north of Toronto, Ontario, Canada.

Macassa is one of the highest gold grade mines in the world. Macassa commenced operations in 2002, and with the discovery of the South Mine Complex (SMC), has been able to increase its level of production significantly over the past five years. The SMC has been driving grade improvement at Macassa, with results from ongoing exploration drilling continuing to extend the SMC mineralization and adding to the Mine's Mineral Resources in support of growing production and extending mine life.

The mine is located in an area with well-developed infrastructure, including a provincial highway, a railway system and a private airport. High-grade ore is processed at the Macassa Mill, which currently has available capacity and is located in close proximity to the mine. 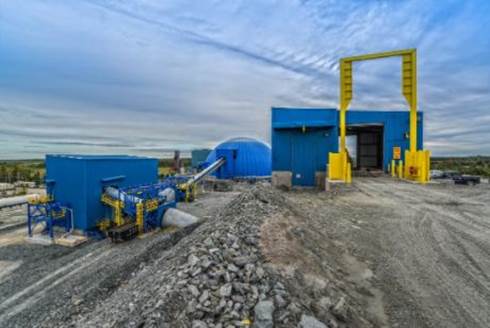 Timmins operation consists of two underground gold mines, the Timmins West mine and the Bell Creek mine, which both feed the Bell Creek mill. The gold mineralization at Bell Creek mine is mined using underground longhole mining methods. At the Timmins West mine, primary mining methods include longitudinal and transverse longhole mining. Ore from both mines is processed at the Bell Creek mill via single-stage crushing and single-stage grinding, with a portion of the gold recovered by gravity methods, followed by pre-oxidation and cyanidation with carbon-in-leach and carbon-in-pulp recovery. 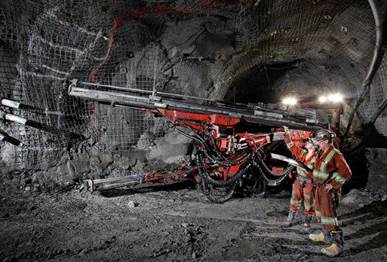 Red Lake Underground Gold Mine is located 180 kilometres north of Dryden about 100 kilometres from the Manitoba border in northwestern Ontario. It spans 42,000 hectares and has produced over 29 million ounces of gold since 1949.

Ore from Red Lake Gold Mines is hoisted up either the Balmer or Campbell shafts, then processed at the Campbell mill using a conventional crushing and grinding circuit combined with a gravity concentration for free-milling gold or carbon-in-pulp for refractory gold. Gold recoveries average 94%. 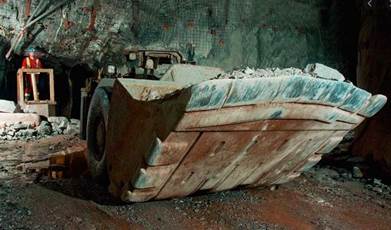 Purchased by Wesdome in 1994, preproduction development at the Eagle River Underground Mine commenced in 1995 and the first gold bar was poured on October 17, 1995. Commercial production was declared January 1, 1996, and to December 31, 2019, a total of 4.2 million tonnes of ore averaging 9.6 g/t Au from the Eagle River Mine totalling approximately 1.3 million oz Au. 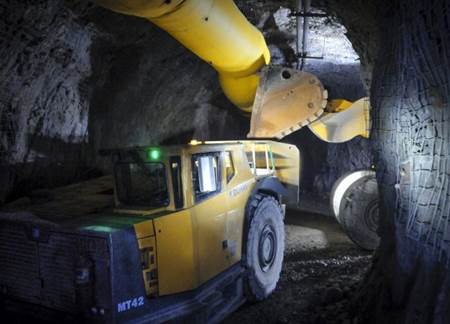 Young-Davidson Underground Gold Mine is located near the town of Matachewan, nearly 60km west of Kirkland Lake in Matachewan, Ontario.

The property consists of contiguous mineral leases and claims totaling 11,000 acres, and is situated on the site of two past producing mines that produced one million ounces from 1934-1957. The Young-Davidson open pit mine achieved commercial production on September 1, 2012, and on October 31, 2013, the Company declared commercial production at the Young-Davidson underground mine following the commissioning of the shaft hoisting system. Open pit mining ceased in June 2014 upon depletion of the reserve; however, stockpiled open pit ore will supplement mill feed until underground production rates have ramped up to design levels.

The underground mine has been designed for low operating costs through the use of large modern equipment, gravity movement of ore and waste through raises, shaft hoisting, minimal ore and waste re-handling, high productivity bulk mining methods and paste backfill. The mine operates scooptrams to load, haul and transfer stope production to the ore pass system from where it is hoisted to the surface via 18 tonne skips. 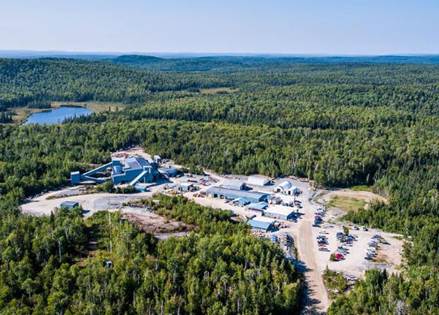 Island Gold Underground Mine is located 10 km south-east from Dubreuilville, Ontario, Canada. The mine comprises 217 patented, leased and staked claims covering 7,926 hectares. It is accessible via a four-season road from Highway 519, just west of the town of Dubreuilville.

Island Gold is a long-life, high-grade, low-cost underground gold mine. The operation is undergoing an expansion which will drive production higher, costs lower and strong free cash flow growth.