Gold production in Quebec in Q2 2020 declined by 32% over Q2 2019 due to COVID-19 related suspensions. Canadian Malartic was the largest gold mine in Quebec.

Quebec is the second largest gold producer in Canada after Ontario. In 2019, Quebec produced 1,927 kozt of gold, or 34% of the total gold output in Canada. 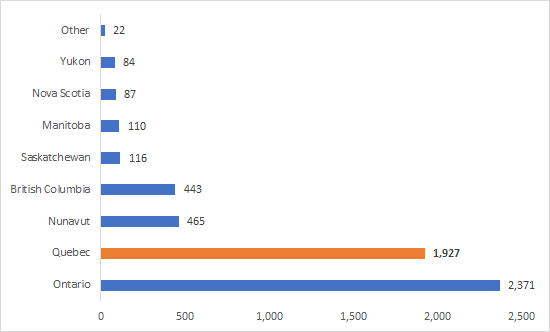 According to the officially released corporate reports, Quebec produced 308 kozt of gold in Q2 2020, a whopping 32% decline over Q2 2019 volume (450 kozt) mainly due to suspensions imposed in accordance with the Quebec government-mandated restrictions to address the COVID-19 pandemic in the province.

Canadian Malartic, a gold mine jointly owned by Yamana and Agnico Eagle, was the largest gold operation in Quebec with 114 kozt of gold produced in Q2 2020, a 33% decline compared to 169 kozt mined in Q2 2019. The Canadian Malartic mine entered care and maintenance on March 24, 2020, in response to government restrictions related to COVID-19 that required mining companies to minimize operational activities. On April 14, 2020, following the Government of Quebec’s decision to authorize the resumption of mining activities, the Partnership announced that the Canadian Malartic would resume operations starting on April 15, 2020.

Agnico Eagle’s LaRonde mine complex is second with 74 kozt of gold produced during Q2 2020. Gold production in the second quarter of 2020 decreased by 20% compared to the prior-year period primarily as a result of the suspension of operations in April, partially offset by higher grade related to positive grade reconciliation in stopes mined in the West mine area.

Eldorado Gold’s Lamaque mine is third with the production of 33 kozt of gold in Q2 2020, which was virtually the same compared to Q2 2019. While gold production met expectations for most of the quarter, production earlier in the quarter was negatively impacted by a reduction in tonnes milled as a result of a temporary suspension of operations from March 25, 2020 to April 15. Mining operations re-started in mid-April 2020 with processing operations restarting later in April following the completion of planned maintenance.

Hecla’s Casa Berardi mine produced comparable 31 kozt of gold quarter-on-quarter despite suspension of operations from March 24 until April 15.

Gold production at Agnico Eagle’s Goldex mine in the second quarter of 2020 decreased by 32% when compared to the prior-year to 23 kozt primarily as a result of the suspension of operations in April and lower grades related to the mining sequence.

IAMGOLD’s Westwood mine was placed on care and maintenance on March 25, 2020, along with other mining companies province-wide, as directed by the Government of Quebec in response to the COVID-19 crisis as mining was considered a non-essential business.

Subsequently on April 15, 2020, Westwood commenced the restart of operations from care and maintenance following the April 13, 2020 confirmation from the Government of Quebec that mining is an essential business. Gold production for the second quarter 2020 was 17% lower than the same prior year period primarily due to lower grades, partially offset by higher throughput.

Newmont’s Éléonore mine operations were temporarily halted on March 23, 2020 as the operations were placed on care and maintenance due to the Quebec government’s restriction on non-essential travel in response to the COVID-19 pandemic. Éléonore began ramping-up operations and milling activities resumed in May 2020. As a result of temporary suspension, gold production decreased by 80% over Q2 2019 to 13 kozt.

*Results have been included from the date of acquisition by Newmont on April 18, 2019. 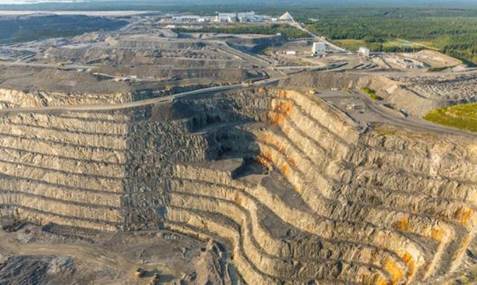 Canadian Malartic mine is Quebec’s largest gold mine.

The mine was developed within just six years after the first exploration drill holes in 2005. The first gold pour was in April 2011, and commercial production began in May 2011.

Ore is processed at the Canadian Malartic mineral processing complex, which has a 55,000-tonnes/day nominal throughput capacity. Ore is transported to a crushing circuit and the crushed ore is stockpiled in a covered pile, then conveyed to the semi-autogenous grinding circuit followed by three identical ball mills, each in closed circuit with hydro-cyclones. The slurry is thickened to about 50% solids before being fed to the leach tank circuit for conventional cyanidation followed by carbon-in-pulp processing technology. The product is doré bars containing gold and silver. 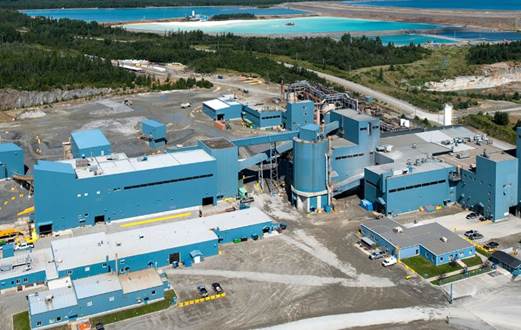 LaRonde has produced almost 6 million ounces of gold since it opened in 1988. LaRonde’s 2.2-km deep Penna Shaft is now the deepest single-lift shaft in the Western Hemisphere. LaRonde achieved commercial production of its deep extension (that is, below level 245) in November 2011, where approximately 94% of its ore is now mined. LaRonde currently has a mine life lasting through to 2025. 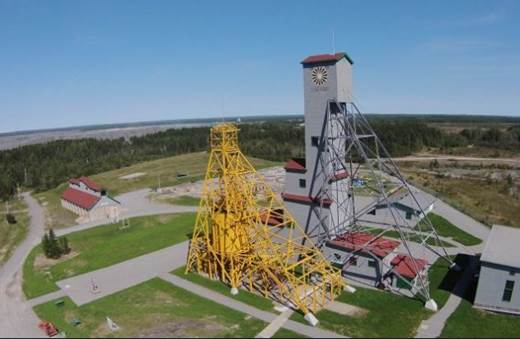 Lamaque is an underground gold mine in Val-d’Or, Quebec.

Commercial production was declared on March 31, 2019.

The Lamaque operation consists of the newly-discovered Triangle gold deposit located only 2.5km south of the historical world-class Lamaque and Sigma Mines, which are also on the property and produced over 10Moz of gold. The Triangle deposit is located in the Val d’Or mining camp, at the eastern end of the prolific Southern Abitibi Greenstone Belt. The deposit is an Archean greenstone-hosted orogenic lode gold deposit. Gold is found within quartz-tourmaline-carbonate veins, which are hosted within a series of sub-parallel sub-vertical shear zones centered around a steeply plunging cylinder-shaped porphyritic diorite (“The Triangle Plug”), which intrudes the mafic volcanic stratigraphy of the Val d’Or formation. 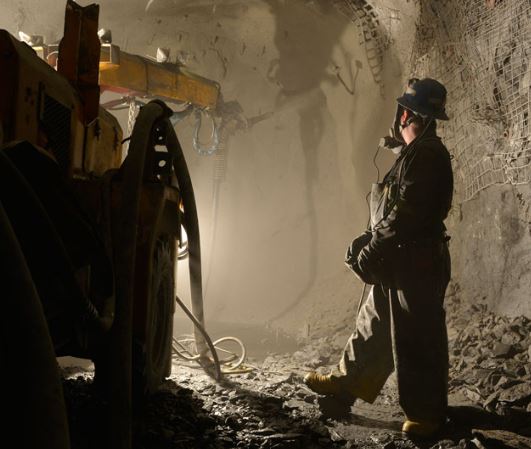 Casa Berardi Underground Gold Mine is situated 95 kilometres north of La Sarre, Quebec and straddles a 37 kilometre section of the Casa Berardi fault.

The Casa Berardi gold deposits are located along a five kilometre east-west mineralized corridor. They include the East and West mines, and the Principal Zones. 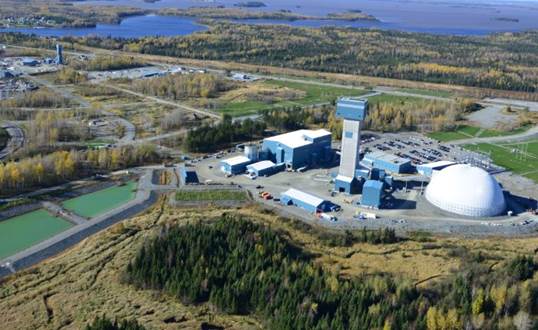 Goldex Underground Gold Mine is located in the Dubuisson Township of Quebec and forms part of the southern Abitibi Greenstone Belt. 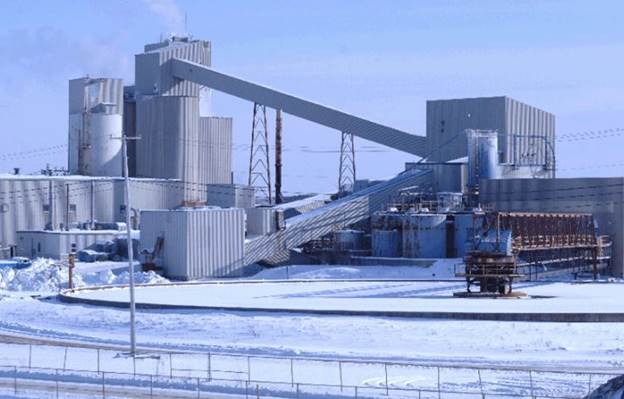 Communications are via fast network links and water supply facilities are available to the Westwood Project. The nearest active railway line is located less than 10 km south of the project. 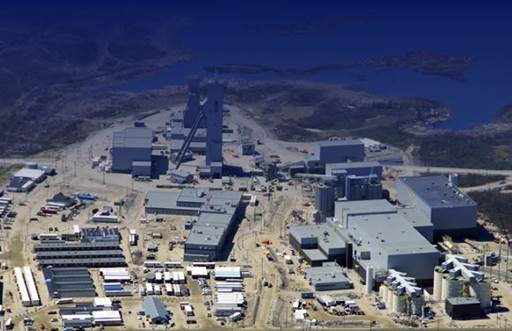 Eleonore Underground Gold Mine is located in Eeyou Istchee/James Bay, in a remote corner of the Northern Quebec region, 800 kilometres north of Montreal on the 52nd parallel.

Gold comes from the Roberto Deposit, which is marked by complex folding and faulting and is still open down plunge. The ore is mined from four horizons using sill and stope techniques, then processed onsite using a conventional circuit that includes crushing, grinding, gravity, flotation and cyanidation. Overall gold recoveries are 92%.

The operation has begun to develop a fifth mining horizon and build a production shaft, both of which will bring Eleonore closer to its full production capacity.