This new world that we live in has forced companies to be EXTRA-CREATIVE and has also shown them that they have WITHIN THEIR RANKS a few STOW-AWAY employees, or, in some cases, a FEW THOUSAND workers, which they may not need after all.

We believe that companies are taking the approach of waiting until the next president is elected to see just how many layoffs they intend to do.

The thought process is as follows:

* If Biden wins, Democrats are likely to approve and execute HISTORICAL STIMULUS packages, perhaps even bail out individual states that have seen a collapse in SALES TAX and income taxes.

If that occurs, the LIKELY OUTCOME is that corporate taxes will be raised, but not immediately. We believe that only in 2021 will this NEW ADMINISTRATION be able to implement any LARGE-SCALE changes.

In the near-term, the chief concern to tackle will be that corporations will probably begin to lay off more employees, PERMANENTLY.

It's a vicious cycle; it's also a CRAZY TIME to be dealing with more strain in one's life and we hope that each will REMAIN POISED, focused and optimistic, while taking massive personal action to RECTIFY MATTERS in his own life.

* If Trump wins, Republicans are likely to approve and execute fiscal stimulus plans as well. I'm not sure how NEVER-TRUMPERS and the Democrats who hate him could apply LARGER PRESSURE on him than they are already, but we believe that his second term, if he is elected, WON'T BE any different than his first one.

If anything, knowing that he doesn't have to APPEASE ANYONE, since he can't win in 2024 anyway, Trump's administration might DOUBLE DOWN on everything they're attempting to achieve and RUSH IT. 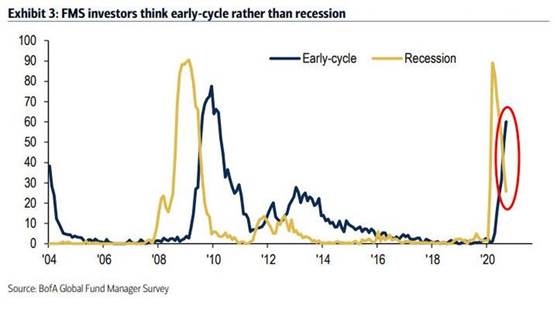 We've definitely seen OVERWHELMING EVIDENCE that the sentiment of the world's polled fund managers – who look at economic data, earnings releases and credit conditions – has shifted towards recovery.

We must remember that Covid-19 wasn't a financial failure, at its source. If the global economy was a train, then Covid-19 isn't a problem with the wheels, tracks or the engine. These are ALL INTACT.

The disease is more like a roadblock that caused the train to BRAKE HARD, so the braking system needed to be QUICKLY REPLACED, so to speak (and it partially has), while the interfering object is moved out of the way.

Some believe the ROADBLOCK is a huge problem and demand a COMPREHENSIVE SOLUTION (mandated vaccines), while others (looks like a majority) believe it can be put out of the train's way with FAR LESS aggressive measures.

Either way, the train itself, apart from some of its passengers SUFFERING TRAUMA or injuries from the EMERGENCY STOP, is fully functional. 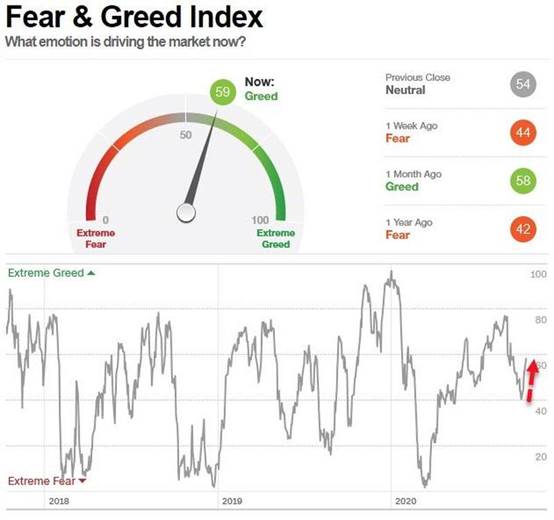 Because the FEAR/GREED index is over 50, I'm actually waiting now, before buying any additional LARGE POSITIONS of equities.

With Europe threatening to implement some stay-at-home orders and with Brexit having HICCUPS AGAIN, this is a very interesting earnings season that's starting.

Our thought is that under President Trump, fewer companies would fire employees, since they know the government won't be as much of a NANNY STATE AS A Democrat-led one and taxes won't be raised.

I do not know who will win the election this November, but the fact that markets ARE SOARING certainly helps the sitting president.

This race is GETTING TIGHTER.