Gold and the S&P see re-election as reality

Our sense is re-election of the StateSide presidential incumbent is now priced into the markets.

Since posting our piece from a week ago, "Neither a Higher Gold Gear nor Pre-Election Fear Has Yet to Appear", still has neither the price of Gold gained appreciable ground, nor has the S&P been beaten down. This near to the election (just seven trading days inclusive), getting into Gold and selling the S&P would already be the decree were the sense for the challenger to take victory. From the "Then and Now Dept." let's go back to this period in 2016 and compare it to today.

The following two-panel graphic depicts the daily price of Gold and the S&P 500 for the three full weeks before StateSide Election Week in both 2016 and 2020 (with "?" placeholders for next week's five days). Leading up to the election in 2016, 'twas clear beyond any shadow of a doubt that for the Presidency the great senator from New York was going to beat the vile yahoo from New York. Mets over Yankees, what? Money thus logically poured out of the S&P whilst those the further wiser got into Gold as we see below on the left:

'Course it then all whirled right back 'round upon the senator surprisingly being trumped and the media's credibility being thumped. Then above on the right, fast-forward four years to today and the pre-election panic of 2016 is not on the 2020 screen. Oh to be sure, the S&P is seeing some negative tilt -- and as regular readers know we've long-sensed the stock market is a "sell" regardless of this year's election results -- but hardly is there a rush into Gold. In fact, three weeks ago Gold settled at 1904; following a brief bound two weeks ago to 1936, price then settled one week ago at 1903; and now this past week it closed net "unch" at 1903.

Thus again in tandem with today's media musings of a Team Blue victory in the making, Gold as it did in 2016 ought by now have left the building. The fact that it hasn't, nor has the S&P materially sold off, gives the "priced into the markets" victory nod to Team Red. But as we wrote last week: "...the real winner one 'knows' will be Team Gold..." 'Tis just that price shan't accelerate as swiftly to the Gold Scoreboard valuation of 3584 with Team Red as 'twould with Team Blue, given currency debasement not expected to be as rampant by the former than by the latter.

As for declining data, let's turn to Gold's weekly bars wherein the descent of the red dots continues per their depiction of the parabolic Short trend. But Gold's weekly price range has now narrowed for four consecutive weeks, almost as if coiling to soon get on with the broader upside trend regardless of election outcomes. Still as noted, the price at which the parabolic trend would flip back to Long for the ensuing week at 2037 is 134 points above the current 1903 level; Gold's expected weekly trading range has shrunk somewhat to 76 points, but even that has not been met in the past four weeks. We nonetheless await what ought soon spring forth: 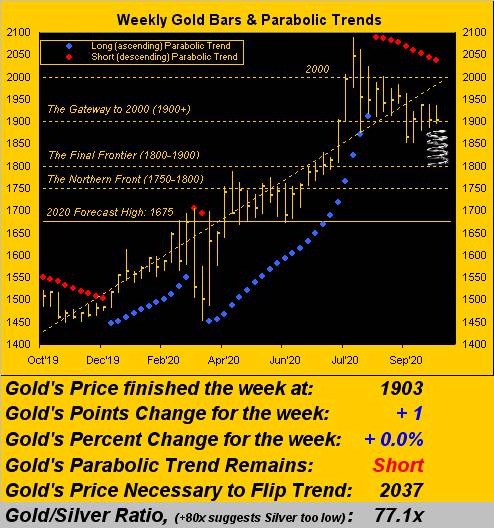 Yet Gold of late seems rather irresponsive as well to FedSpeak, even as this past Wednesday Governor Lael "The Brain" Brainard brought the case for more fiscal spending. Indeed the Fed's Tan Tome of regional activity sees recovery as modest, although the Bureau of Economic Analysis come Thursday is "expected" to report a Q3 annualized Gross Domestic Product growth rate 'round +30%. Hardly modest that, but perhaps supported in part by the Econ Baro as follows, the week's upside push enhanced by strength not seen since 2006 in Building Permits for homes and a reduction in Jobless Claims to their lowest level within the COVID cycle:

Meanwhile EuroSide with COVID seemingly ever on the march, governmental debt issuance continues to surge, although it hasn't really taken any toll on the price of the €uro itself vis-à-vis the Dollar. Today at $1.1875/€, should the economic resurgence StateSide outpace that recorded EuroSide, one ought think the €uro shall slide sub-$1.10 as was its stance when COVID first kicked in. Moreover, Standard & Poor's "negative outlooks" on both Italy and Spain may morph into outright ratings downgrades so says S&P’s Sovereign Group Managing Director Roberto Sifon-Arevalo. Reminder: Gold plays no currency favourites... "How low can your €uro limbo?"

But not too low have we seen the price of Gold go. In fact over these past two weeks, Gold's 21-day linear regression trend has rotated from negative to positive, as depicted below left by the baby blue dots having climbed above their 0% axis. Indeed price's fallout within that three-month view has turned more consolidative. As for the 10-day Market Profile below right, volume-per-price is most cumulative at both 1928 and 1905:

As for Sister Silver, you know she's sporting her precious metal pinstripes (as opposed to her industrial metal jacket) when her picture is fairly in sync with that of Gold. Here below left we've Silver's three months-to-date of daily bars and "Baby Blues", whilst below right her volume apices show most dominantly at 25.25, 24.25, and betwixt the two at her present price 'round 24.70:

In closing, from the "Way to Go Jay Dept.", Federal Reserve Chair Jerome Powell on Monday cautioned against The Bank's issuance of a digital currency, underscoring such endeavour as being subject to subversion from theft by cyber attack, counterfeiting and fraud, let alone the implications upon monetary policy and financial stability. To that list we'd humbly include worthlessness should something like FedBit be hacked and ended in a digital millisecond to boot. But hack my Gold bar and 'twill fall on your foot! 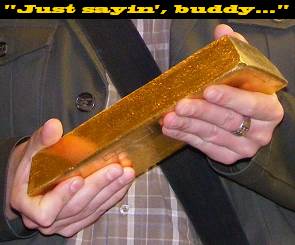