Cadia East was the largest gold mine in Australia in June Quarter 2020. Seven out of the top 10 largest mines recorded loss in production.

The following is the list of top 10 largest gold mines in Australia in June Quarter 2020 prepared by Mines and Metals on the basis of corporate reports.

With 237 koz of gold mined in June Quarter 2020, Newcrest's Cadia East mine was the largest gold producing center in Australia, followed by Newmont's Boddington (168 koz) and Kirkland Lake's Fosterville mine (155 koz).

Newcrest's Telfer mine is fifth with 114 koz of gold mined in June Quarter 2020. 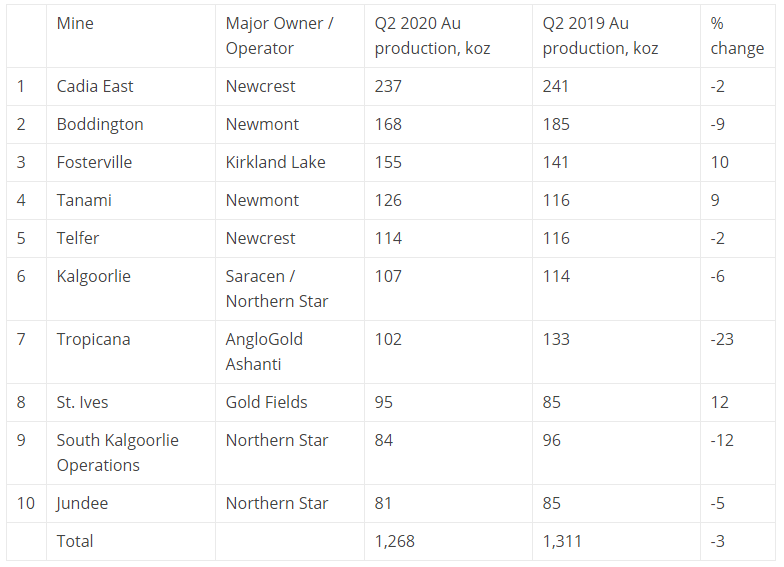 Newcrest's Cadia is made up of the Cadia East underground panel cave mine and the Ridgeway underground mine (currently in care and maintenance). Cadia East is the biggest gold mine in Australia despite 11% production decline in March Quarter 2020.

Newmont's Boddington mine is located within the Saddleback greenstone belt in Western Australia. A large gold and copper mine, Boddington is located 16 km from the rural farming town of Boddington and 120 km from Western Australia's capital city, Perth. Boddington was a three-way joint venture between Newmont, AngloGold Ashanti and Newcrest. In 2009, Newmont purchased AngloGold Ashanti's shares to become the sole owner of Boddington. Commercial production began in 2009, and in March 2011 the operation produced its first one million ounces of gold. Boddington mine is set to become the world's first open-pit gold mine with an autonomous haul truck fleet once it begins operations in 2021.

Kirkland Lake's Fosterville Mine is the highest-grade and lowest-cost gold mine globally, located 20km from the city of Bendigo in the State of Victoria, Australia. The Fosterville Mine features growing gold production at increasingly high grades, as well as extensive in-mine and district scale exploration potential. In March Quarter 2020, Kirkland Lake achieved 25% y-o-y production growth at Fosterville.

Newmont has fully owned and operated the Tanami mine since 2002. The mine is located in the remote Tanami Desert of Australia. The underground mine and plant are located on Aboriginal freehold land that is owned by the Warlpiri people and managed on their behalf by the Central Desert Aboriginal Lands Trust. Tanami is a Fly-in, Fly-out (FIFO) operation in one of Australia's most remote locations. Tanami is 270km from its closest neighbours, the remote Aboriginal community of Yuendumu.

Newcrest's Telfer gold-copper mine is located 400 kms from Port Hedland, Western Australia. Telfer is comprised on the Main Dome, West Dome open pits and underground mines and produces gold and copper via a large, dual train, comminution circuit followed by flotation and cyanide circuits, which produce gold doré and a copper-gold concentrate. Gold-copper concentrates produced are trucked to Port Hedland and exported to various smelters, primarily in the Eastern Asia region. The gold doré from Telfer is refined at the Perth Mint, Western Australia.

The Kalgoorlie Open Pit gold mine, famously known as the Super Pit, was Australia's largest open cut gold mine until 2016 when it was surpassed by the Newmont Boddington gold mine also in Western Australia. The Super Pit is located off the Goldfields Highway on the south-east edge of Kalgoorlie, Western Australia. The pit is oblong in plan view and is approximately 3.5 kilometres long, 1.5 kilometres wide and over 600 metres deep.