Is silver leading bitcoin or is bitcoin leading silver?

Is silver leading Bitcoin or is Bitcoin leading silver? Well, it depends on which time framing one is looking at.

On this chart comparison below, silver appears to be leading the way higher compared to Bitcoin: 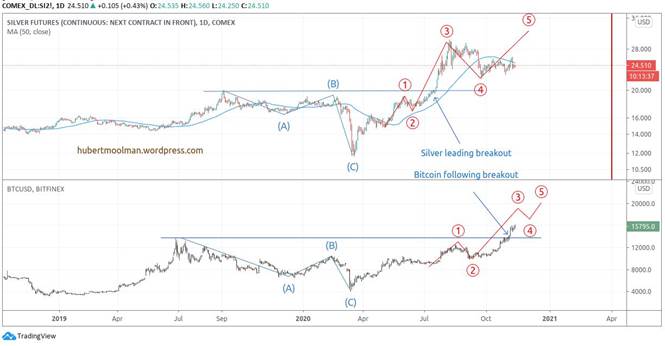 Both have exceeded the highs of the marked pattern, but it is the way, and timing of how they have done it that is of interest.

Silver was the first one to breakout of its high. Bitcoin followed suite about 108 calendar days later. If the comparison stays valid, then Bitcoin is currently moving towards a similar point 3 that silver already reached in August of this year.

Below, is another comparison of silver and Bitcoin: 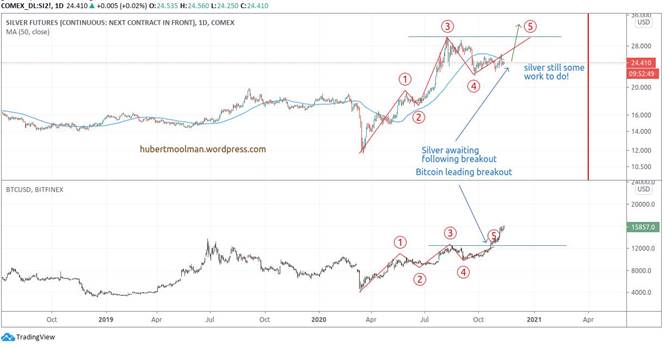 Again, I have marked similar patterns on both charts to show how they could be similar. Bitcoin has already exceeded its recent high (point 3) and is much favoured in the short-term.

Silver is still lagging below the recent high (point3), and just like Bitcoin did in the previous comparison, will eventually follow Bitcoin higher than point 3 in this comparison.

In my previous article, I have shown how a certain signal has already prepared the way for higher silver prices. The market is trying its best to shake some weak hands before it goes much higher.

In summary, it is fair to say that based on the above comparisons and the fact that silver and Bitcoin are   considered alternatives for a failing dollar, Bitcoin’s recent breakout should give silver bulls hope that silver will soon rise much higher.

hubert@hgmandassociates.co.za
hubertmoolman.wordpress.com
Disclaimer: The views expressed in this article are those of the author and may not reflect those of Kitco Metals Inc. The author has made every effort to ensure accuracy of information provided; however, neither Kitco Metals Inc. nor the author can guarantee such accuracy. This article is strictly for informational purposes only. It is not a solicitation to make any exchange in commodities, securities or other financial instruments. Kitco Metals Inc. and the author of this article do not accept culpability for losses and/ or damages arising from the use of this publication.