Bailouts and stimulus are not the best solution to the Covid pandemic.

I know it’s far from perfect, but I think it could still be the best overall option.

On some level, it’s surprising that the role of insurance has gotten so little attention in this crisis.

After all, us and future generations will have to pay for all these massive bailouts.

Of course, most of that responsibility has fallen on government so far.

Some have resorted to printing, while others have turned to selling a portion of their gold reserves.

In my view, that points to the ultimate solution; we should all be aiming to self-insure.

And gold promises to be a top choice to that end.

In its latest report, the Global Preparedness Monitoring Board (GPMB), a joint effort by the world Health Organization (WHO) and the World Bank Group, said the pandemic has cost over $11 trillion so far.

The GPMB suggests that proper preparation for the pandemic would instead have cost about $5 per person or about $39 billion.  Maybe, maybe not.  These massive programs tend to snowball and take on a life of their own.

But what about the role of insurance?  We already have it for infrequent disasters like fires, earthquakes or flooding.

I’m no actuary.  And I know that global pandemics are, thankfully, a lot less frequent than these other catastrophes.

Undoubtedly, the risks and costs to adequately pricing premiums against pandemic losses are complex. Insurance companies themselves sometimes turn to reinsurers, when the risks are too large for them to take on their own.

But logically, if global pandemics are rare one-in-fifty or one-in-one hundred year occurrences, then it would stand to reason that premiums might be low, in part because insurers would likely have decades during which to collect and build reserves.

One thing is clear, there’s been a notable difference between how developed and developing nations are reacting to the fallout of this Covid crisis.

While mature economies have turned to the printing press, emerging markets have faced much higher restrictions.  They simply don’t enjoy the same access to debt markets.

Instead, they must turn to external financing, which often means raising funds in foreign currencies.  Still, some of these have easier access to debt right now, like India, the Philippines and Colombia.  But a higher dependence exports puts them at higher risk of capital flight and declining capital inflows.

While I agree with most of this, I’m not so sure about the “independent central banks” part.

Still, in my view the restricted access to debt markets may actually turn to the advantage of some less developed countries.

As the printing press has gone into overdrive across most of the West, inflation expectations have risen dramatically over the past 8 months.

With many emerging markets being commodity exporters, rising resources prices could be a boon to them over the next several years.  Copper prices, for example, are up 50% since their March lows.

But the limited ability of developing nations to print and stimulate has meant a much bigger reliance on their own savings.

Some countries have had a deep understanding of and affinity towards gold for centuries.

So it’s little wonder that they’ve been leading the way over the past decade accumulating the precious metal. 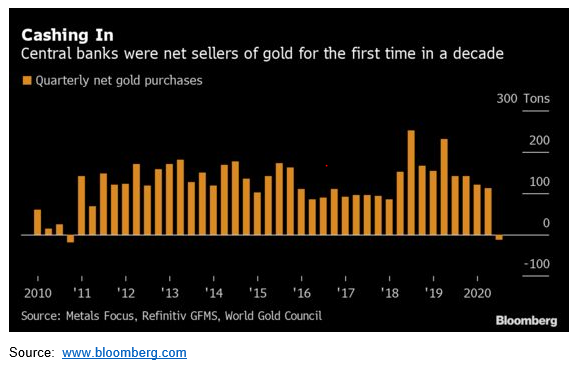 Until this past quarter, we have to go back nearly a full decade for a time when central banks were net sellers of gold.

As Bloomberg reported, some of these sellers have recently capitalized on record high gold prices in order to soften the blow of the coronavirus pandemic.

The World Gold Council said that Turkey and Uzbekistan have been among the biggest sellers, with Russia indicating it sold in Q3, its first time in 13 years.

The big takeaway is that these nations have been building their rainy-day fund for a long time.

It’s true that this time it didn’t just rain, it was a deluge.

But the point is they had a backup reserve.  And when needed, it delivered.

It also certainly didn’t hurt that gold did was it’s supposed to.  It rose in the face of chaos.  And that allowed those central banks to sell some of their gold at record highs, needing to sell fewer ounces for the same proceeds than just a few months earlier.

That’s the lesson for us as individuals.

Gold is the ultimate form of savings, and the best possible insurance policy.

With an end to the pandemic within sight but still a way off, that insurance is about to get a whole lot more valuable.