Although gold did close higher on the day, it still closed lower on the week with a low equal to last week’s. This marks gold’s second consecutive week of lower pricing. The total drawdown over the last two weeks amounts to a net decline of $86. While it is obvious that the major damage occurred on November 9th when market forces took the precious yellow metal almost $100 lower trading to an intra-week low of $1847. 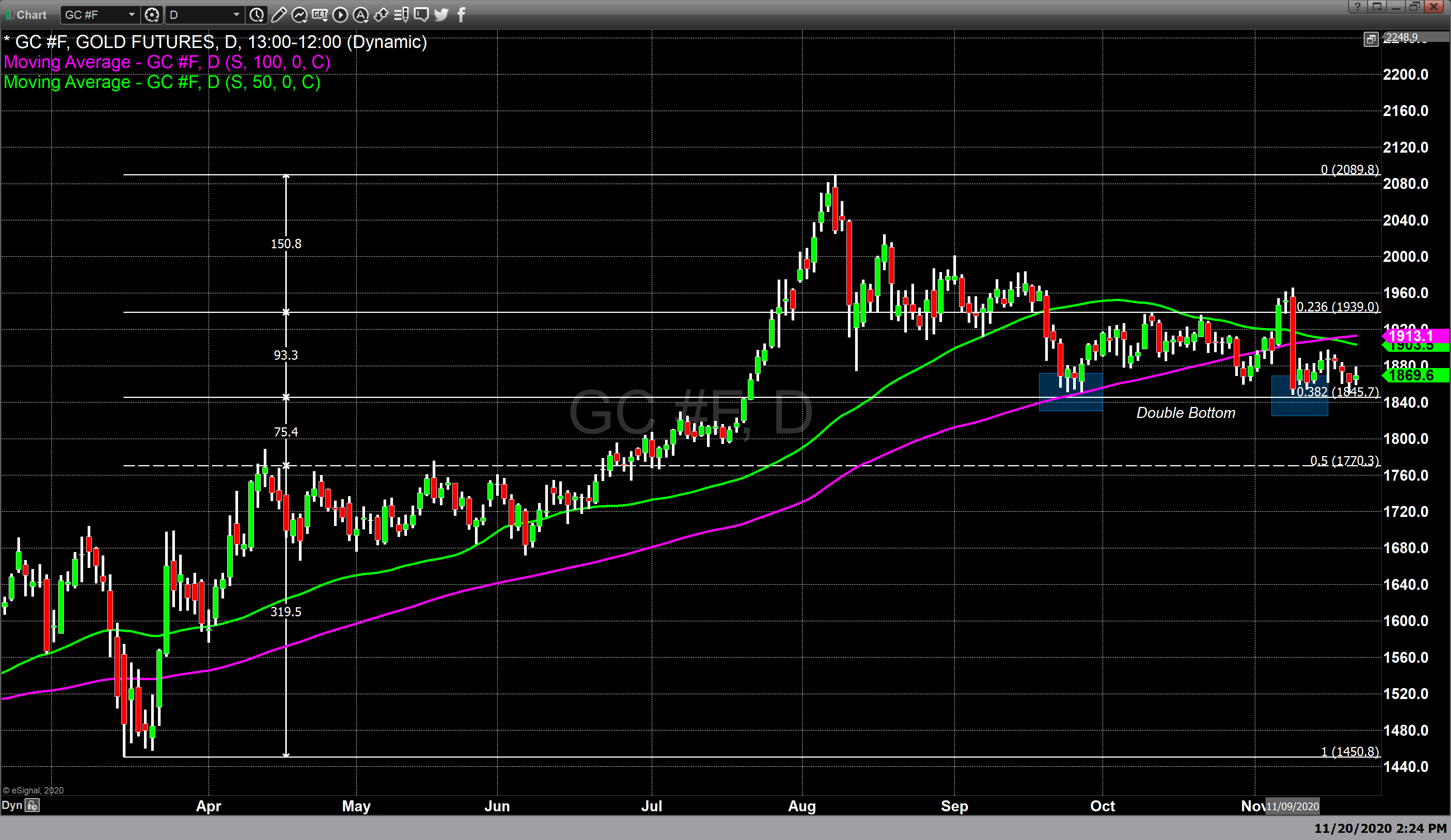 However, during last week’s trading activity gold moved off of the weekly low to close at $1886. On Monday gold futures opened at $1886, traded to a low this week of $1849, two dollars from the one-day drop on Nov. 9th.

During an interview on Wednesday, November 18th with Kitco news I spoke about the fact that we had identified a variation of a Western chart pattern called a death cross.

This is why our technical studies have indicated that $1845 is a price level that should be the first price point to look for a potential pivot and key reversal. Last week’s low at $1847, along with this week’s low at $1849 is further technical confirmation that many market participants bought the dip during the last two weeks. This indicates that traders see potential support at that price point.

During Wednesday’s interview, I was asked what is a possible motivating factor that has taken gold prices lower ever since hitting the new record high on August 10th. The gold bulls have been placid and are patiently awaiting a greatly needed fiscal stimulus package which up till now has been placed on hold. Furthermore, it was my belief then as it is now that once a fiscal stimulus bill is passed we should see gold react in an extremely bullish manner moving to higher pricing.

As reported in MarketWatch today, “On Thursday, Senate Minority Leader Chuck Schumer, D-NY., said Majority Leader Mitch McConnell, R-Ky., had agreed to restart negotiations over a new coronavirus aid relief package. Treasury Secretary Steven Mnuchin also said he is preparing to reach out to House Speaker Nancy Pelosi. For months, Republicans and Democrats were disputing the size and scope of a potential aid bill. It isn’t clear if discussions will restart in earnest, but commodity investors may find the recent reports sufficient reason to buy gold on the expectation that more funds could be expended by governments to limit the economic harm from the spread of the deadly pathogen.”

Edward Moyer, Senior market analyst at Oanda said that “If stimulus negotiations continue to head in the right direction, gold should start to rally again.” He also spoke to the fact which many analysts including myself agree upon that, “Every bit of additional stimulus from here on out will be a bullish catalyst for gold. Too much of the US economy is vulnerable and that will keep the stimulus flow well into first half of next year,”

Although gold has traded well-off of the new record high achieved on August 10th at $2088, since then it has been in a declining mode. Price action next week will be highly headline-driven, with market participants wanting more information as to whether or not a fiscal stimulus bill will be forthcoming before the end of 2020. If there are further positive developments of an aid package the first place to look for gold to trade higher from is its current retracement of 38% which has also shown strong historical support especially over the past two months.

It is also a realistic probability that once President-elect Joe Biden takes office on January 20th he will attempt to allocate enormous amounts of capital not only for a fiscal stimulus bill but for other programs he believes are long overdue. According to many news publications including a budget model created by Penn Wharton, from the University of Pennsylvania “The Biden platform raise $3.375 trillion in new tax revenue while increasing spending by $5.37 trillion.”

Other estimates anticipate that President-elect Biden’s proposed budget would hike national spending, raise taxes but further inflate the national debt. While he proposes taking in approximately $3 trillion in new taxes while his proposals will cost approximately $11 trillion in spending. 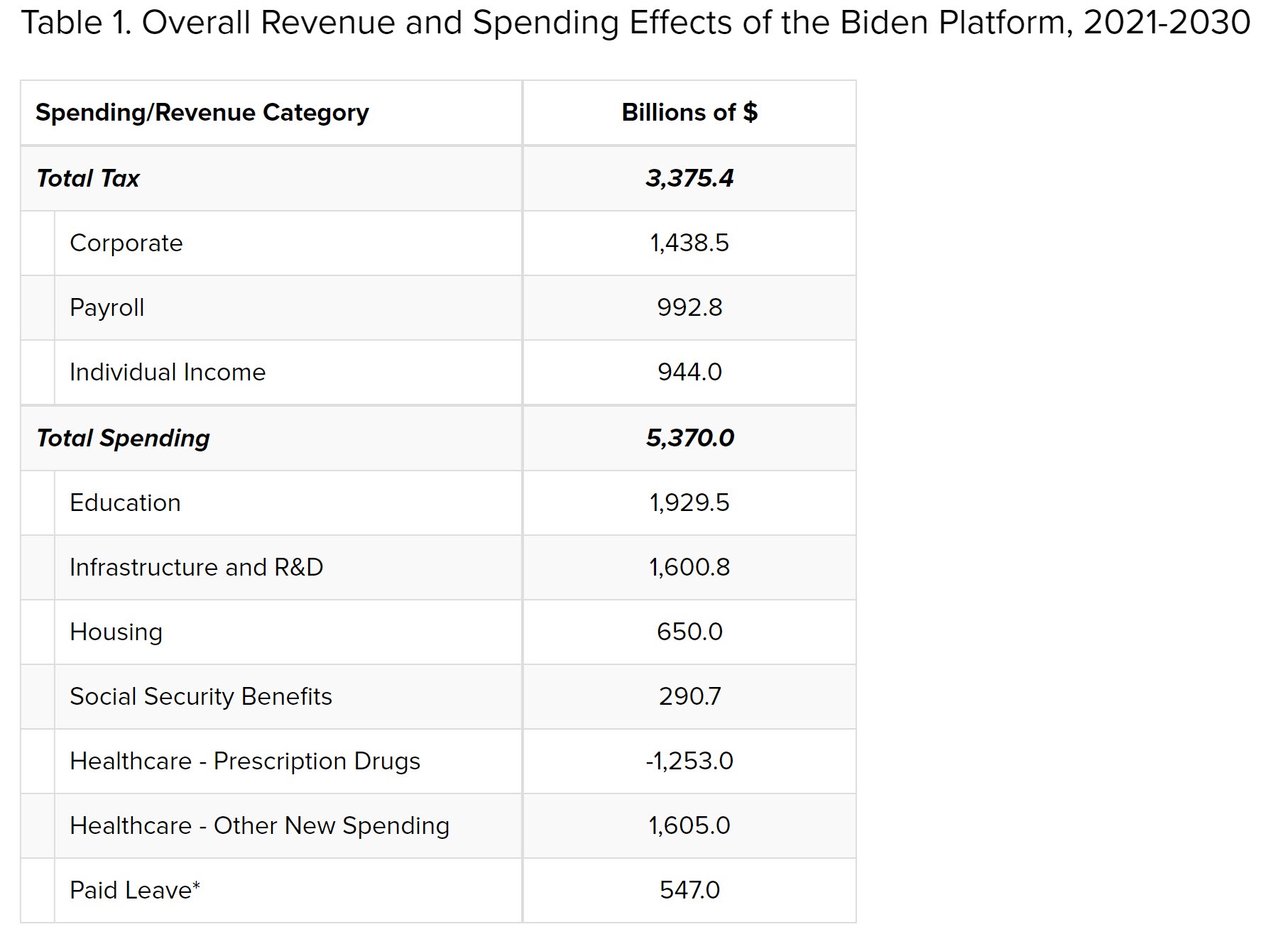 President-elect Joe Biden is proposing large new public investments that can be divided into three major categories; education, infrastructure, and research and development. The budget model created by Wharton estimates expenditures of $1.9 trillion over 10 years to be directly injected into education. It also assumes expenditures in infrastructure and research and development plans which will cost an additional $1.6 trillion in spending.

These funds will be allocated for new investments in water infrastructure, high-speed rail, municipal transit, green infrastructure projects as well as R&D. He is also proposing that the government allocate $650 billion in new housing spending over the next 10 years providing section 8 housing to all the qualified, expanding the low-income housing tax credit, and create new incentives to build affordable housing including a new affordable housing fund.

President-elect Biden is also focusing on Social Security related provisions. His plan focuses on increasing benefits especially for households with low earnings which is expected to cost an additional $290.7 billion in spending over the next 10 years.

Although President-elect Biden is a moderate Democrat according to the Washington Examiner, “Throughout the Democratic presidential race, Joe Biden has been described as a leading "moderate" within the party. But the truth is that Biden is only moderate when compared with Sen. Bernie Sanders and those candidates who embraced key aspects of a socialist agenda that will cost tens of trillions of dollars.”

If the expenditures Joe Biden plans to implement are even close to the projections, we will see the most massive amount of government spending in history. That most certainly could have a dramatic and devastating impact on the value of the U.S. dollar and concurrently be highly supportive of higher gold pricing in the years ahead.