My researchers and I want to highlight a Weekly chart pattern that is warning of a potential Top/Reversal in the SPY & SPX.  Although the current trend is Bullish and the markets are looking forward to the new year, new policies, and probably new stimulus which normally prompts some type of upward price rally in the markets, we see an "Island Setup” that has continued to form after all the positive COVID-19 vaccine news.

An Island Setup in price is when price moves or Gaps away from a typical price range or boundaries, then stalls.  This type of setup is similar in structure to a Doji Star setup in an “Evening Star” formation.  Similarly, the Doji Star pattern also warns of a possible trend reversal.  Our researchers believe any continued failure to rally at this stage points to a very real downside price reversal setting up in the SPY/SPX. Let's take a look at some Weekly charts.

The SPY Weekly chart below highlights the Island Price formation as well as the technical divergence in the RSI indicator (below the price chart).  What interests our researchers is the clear Island price setup outside the CYAN consolidation/FLAG formation.  Either the SPY is going to continue to rally much higher at this point or it is going to fail in this Island formation and fall back to the $320 level.  The more price fails to rally at this stage, the more likely the downside price expectation becomes. 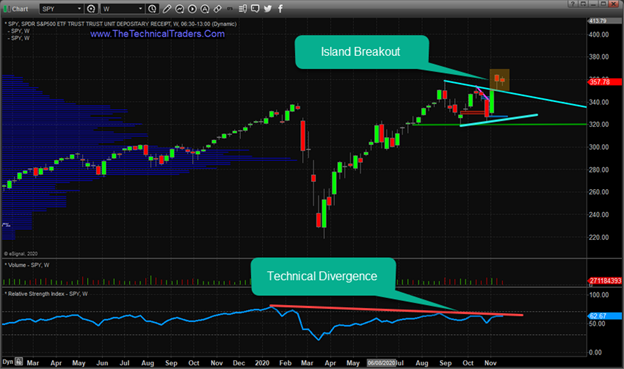 The following SPX Weekly Chart shows a similar pattern with the same RSI Technical Divergence.  Take note of the Double Doji Island setting up recently, and how Double Doji patterns are very indicative of market indecision and potential reversal patterns.  The most important single candle in Japanese Candlestick Theory is the Doji Candle. 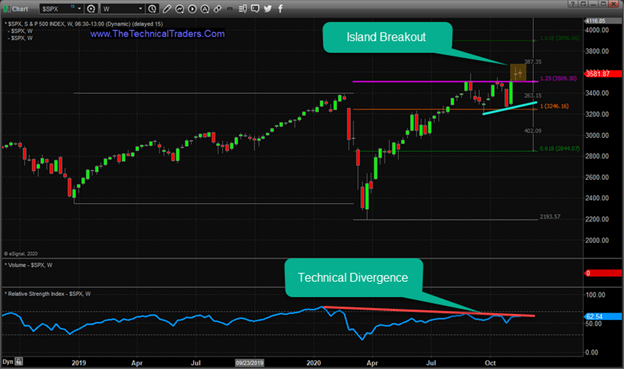 There is another type of Japanese Candlestick pattern that this resembles, called a Scouting Party. A Scouting Party pattern is established when price moves above resistance, or below support, in an attempt to secure new price highs or new price lows – but fails to hold these price levels over time.  This is also indicative of an attempted price trend that fails and results in a price pullback/correction.

Right now, the market price in the SPY and SPX is “scouting for new support”.  Keep your eyes on the MAGENTA Resistance levels as price continues to try to retain these new highs.