But there are some big reasons why Biden could become silver’s best friend.

The main force behind this thesis is that we can expect stimulus. A lot of stimulus.

More specifically, Biden is likely to do his utmost to bring on more general support for the economy through increased borrowing, further expanding the deficit and national debt.

He has also made it clear that he’s a big proponent of a Green New Deal, which is a mega effort to migrate the economy towards renewable energy and net zero carbon emissions.

And both of these are likely to help boost silver prices in a big way in the next few years.

The timing for any new surge of easy money is difficult to predict.

Even if the Senate remains republican, there will be lots of pressure from all sides to pass some kind of new stimulus bill.

Yes, there are now three promising vaccines nearing approval, and those will be game changers.  But by the same token, that’s not going to happen overnight.  “Back to normal” will be a gradual process.

Healthcare workers will be first to be inoculated, followed by higher risk individuals.  But it’s likely to be spring, or later, before the “average citizen” has access to a vaccine.  That means we’re unlikely to see anything like business as usual until maybe next fall.

Even Fed Chair Jerome Powell has recently repeated, “there hasn’t been a bigger need for it in a long time”, appealing to Congress for more coronavirus relief for challenged businesses and Americans looking for employment.

So, given the extent of economic damage and the drawn-out nature of this pandemic, I think it’s reasonable to expect multiple stimulus packages to come forth.  The virtual printing press will not get much rest.

This chart shows what’s been happening to the M1 Money Supply since 1980. 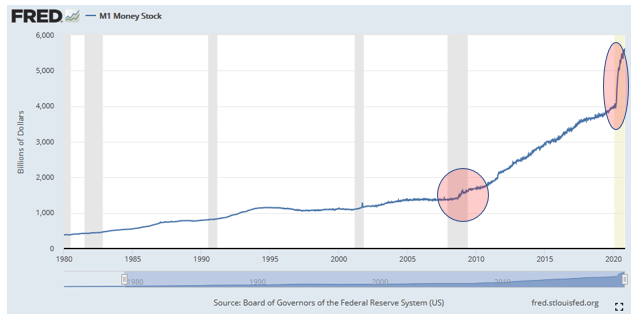 We saw a big ramp up in post 2008-2009 financial crisis, then an explosion higher this year.

I’m hard-pressed to find any forces that will allow this trend to recede.  And the Fed is committed to near-zero rates until at least 2023.

Remember that silver is a precious metal, with many of the same characteristics as gold.  So, it’s widely used as a hedge against chaos and inflation.

According to the Silver Institute, silver investment demand was up 12% in 2019 over the previous year.  The Institute recently reported that in the first half of 2020, investors hoarded 10% more silver than in the same period last year.

One big bonus is that it’s much cheaper than gold.  So informed investors will continue to buy it as a means of protection for their savings as Biden goes full-tilt with “helicopter money”.

The second major force behind higher silver prices is the Green New Deal.

Biden’s clear support for this massive move towards net-zero emissions by 2050 is going to be expensive.  The plan is to spend $1.7 trillion in federal money, and leverage an additional $5 trillion in private sector and local investment funds.

Also, advancing this program is going to require a lot of minerals, of which silver will be key.

Between 2008-2019 solar power capacity jumped by an average 47% annually.  Last year a third of new energy capacity in North America was solar.

Solar has managed to reduce the amount of silver it requires per unit of energy output as it generates continuous improvements.  But silver’s dominance as the metal with the least electrical resistance at standard temperatures means it’s difficult to substitute.

Silver is also one of the most reflective and light-sensitive metals in existence.  So even as the silver price rises, industrial demand is likely to remain strong.

Besides silver’s dominant role in solar panels, the metal is increasingly a crucial component of electric and hybrid vehicles as well.  Silver is not only used in vehicle connectors, but also in certain battery technologies.

In seeking a 100% clean-energy economy, the Biden campaign endorsed advanced nuclear power to help achieve those goals.  Consider that the control rods used in nuclear reactors include silver, along with other elements, to control the rate of fission of uranium or plutonium.

Despite growing investment and industrial demand, 2019 saw global silver mine output drop for the fourth consecutive year.  The main reasons are because few new projects are being developed, ore grades are declining and reserves are being depleted.

The Silver Institute expects 2020’s mine supply to fall by 4%, in part for the above reasons, but also due to coronavirus shutdowns.

So, I expect silver’s opportunity to be massively to the upside.

In my view silver is in the process of forming a bottom in its price. 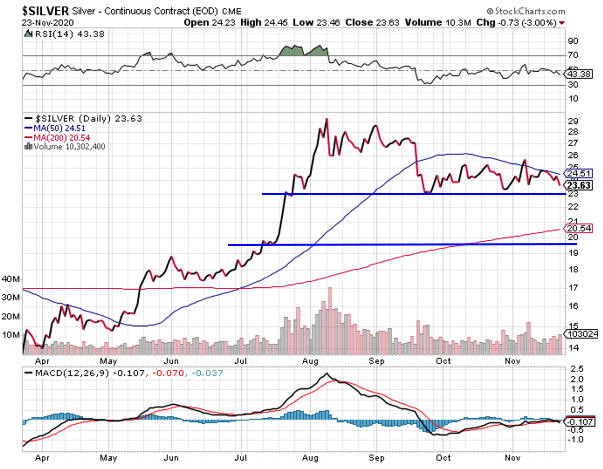 If silver breaks below $23, then look for a potential move down to $20.

That would go a long way towards shaking out weak hands, and set the stage for a strong rally into year end and through the start of 2021.

Biden may not intentionally be a silver bull.  In fact, I doubt he even thinks about the metal.

But that doesn’t mean his policies and actions won’t be major forces driving silver much higher from here.