We are now proven wrong, (following last week's piece having been intently entitled "Gold More Consolidative Than Corrective Before 'BOING!'"). And yet we "feel" as Gold Bullish as ever! Convoluted indeed.

Oh to be sure, the "BOING!" we'd so graphically portrayed a week ago is sitting out there. But Gold has since tested our conviction that price these many past weeks had been consolidating rather than correcting.

Which demonstrates once again that a lot can happen even in a shortened trading week, Gold settling yesterday (Friday) at 1791, -4.6%. As well, a lot can happen in the space of a mere hour, Gold on Friday falling from 1804 at 05:00 Pacific Time to as low as 1773, a -1.7% dump within 60 minutes. Moreover, 'twas Gold's third worst week in this calendar year and the fourth worst since that ending 11 November 2016.

Convoluted against common sense as it seems, let's go straightaway to Gold's weekly bars from one year ago-to-date. Upon having achieved its All-Time-High of 2089 on 07 August, Gold has retreated beyond consolidation -- encased within the light-blue box as shown -- back down from the 2000 milestone level through our "Gateway to 2000" (1900+) and further through our "Final Frontier" (1800-1900) to now find itself priced within the battle zone of "The Northern Front" (1750-1800) which was critical resistance during 2012, (per the Gold Structure chart near the foot of this missive). Gold's stance has thus gone from conservative consolidation -- notwithstanding the descending red-dotted parabolic Short trend -- to now in toto outright convoluted correction of -17.2% since the All-Time High:

But wait, there's more. Similar to the somewhat suspect StateSide Presidential Election result, Gold's correction also is not passing the "smell test". The "poor optics" in this case of both Gold and Silver falling as do the Dollar Index and yields are (again recalling Alice from a week ago) curiouser still, and convolutedly so.

To wit, let's go 'round the horn for all eight components comprising the BEGOS Markets. These are their respective daily bars from one month ago-to-date, grey diagonal trendlines, and "Baby Blues" (the dots which depict the consistency of those trendlines). Note that the trends are rising for every market except Gold and Silver. Of note therein we've the rising Bond, (i.e. lower yield), the rising Euro and Swiss Franc (i.e. dropping Dollar), and supposedly-Gold-leading soaring Copper. Ought not the precious metals, too, be booming? 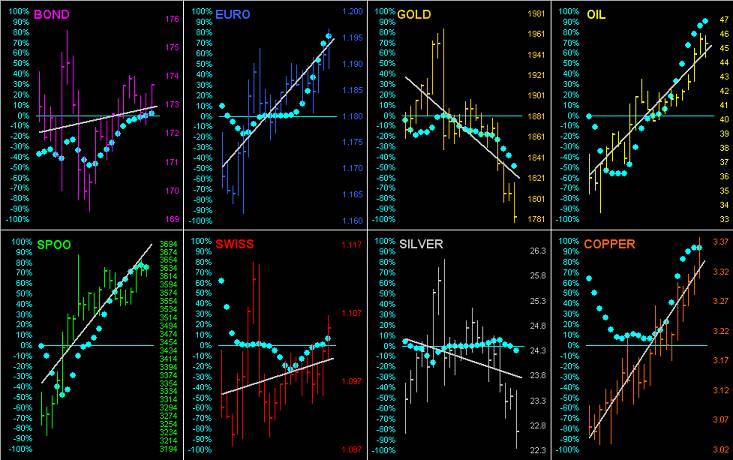 So this again reminds us as we oft put forth that Gold plays no currency favourites: The Euro is on the rise (even as the European Central Bank prints away), as is the Swiss Franc and also the Yen, all rightly reflected in the Dollar Index's recent demise to its lowest level -- 91.801 -- since 01 September: Gold then was priced at 1977. ('Course, could be worse: could be bits**t which Friday fell just intra-day -13.8%; the quintessential Thanksgiving leftover turkey, that).

And whilst the market is never wrong, here's further evidence of Gold's near-term mis-valuation. From the website we've this graphic from one year ago-to-date of the price of Gold vis-à-vis its smooth valuation line. Such line is a suggested price for Gold based upon how it is moving relative to the other four components that comprise the five primary BEGOS Markets (Bond / Euro / Gold / Oil / S&P). The oscillator in the lower panel thus shows that Gold per Friday's close is 144 points "low" relative to where it "ought be":

"Well, mmb, it's all about the vaccine coming on to save the world from COVID!"

Squire, you sound like one of those black and white "SciFi" films from the late 50'. "Don't miss 'The Vaccine that Saved the World', starring the Emmy Award -winning Andy Cuomo with Peter Lorre as Tony Fauci; in theatres this December!"

Speaking of "givin' it back", Federal Reserve Chair Powell this past week concurred that unused COVID relief funding be returned to the Treasury, although New York FedHead Williams then suggested emergency lending can be resumed anyway. "Ya needs dough, we gots dough, but if it's too much we'll take it in...", (or something like that); there's your Fed stance, right there. 'Course, just down Constitution Avenue and across to the Senate on Independence Avenue, Mitch "The Mighty" McConnell instead suggests a "repurpose" of such dough. Otherwise, heaven forbid we've an actual shrinkage of returned faux dough that sends Gold to zero.

Besides, given the Economic Barometer's bummer of a week, we need all the dough we can get. 'Twas the Baro's fourth-worst week thus far in 2020, low-lighted by November's fall in the Conference Board's measure of Consumer Confidence from 100+ (101.4) to sub-100 (96.1), Initial Jobless Claims reaching a five-week high, a marked slowing in October's Personal Spending and moreover Personal Income actually shrinking, along with the Fed's-favoured inflation measure of Core Personal Consumption Expenditures returning down to a no-growth 0.0%. Given all of the foregoing, again ought it not be Gold that is soaring? All whilst the care-free S&P 500 makes a fresh all-time high. Convolution vs. common sense:

And more from the "Buyer Beware Dept." comes the following website graphic of the difference between the rise in the S&P and its Moneyflow as regressed into S&P points from one quarter ago-to-date. The suggestion therein is the S&P "ought be" nearly 476 points lower (at 3162) than 'tis (at 3638). And the "live" price/earnings ratio? 44.8x ... Oh, but that's right: "Markets don't crash in December":

As for price crashing through profiles, here they are for the past fortnight for Gold on the left and Silver on the right. Lots of overhead apices to overcome:

In wrapping it up for this week, here is the aforementioned Gold Structure chart across these last nine years. And looking rightmost at what now is a bona fide correction, in just having corresponded with a very valued charter reader of The Gold Update, we wrote: "This correction looks purely 'technical' and is not 'fundamental' a wit." As mentioned, The Northern Front now serves as critical price support, just as 'twas resistance a-way back in 2012: 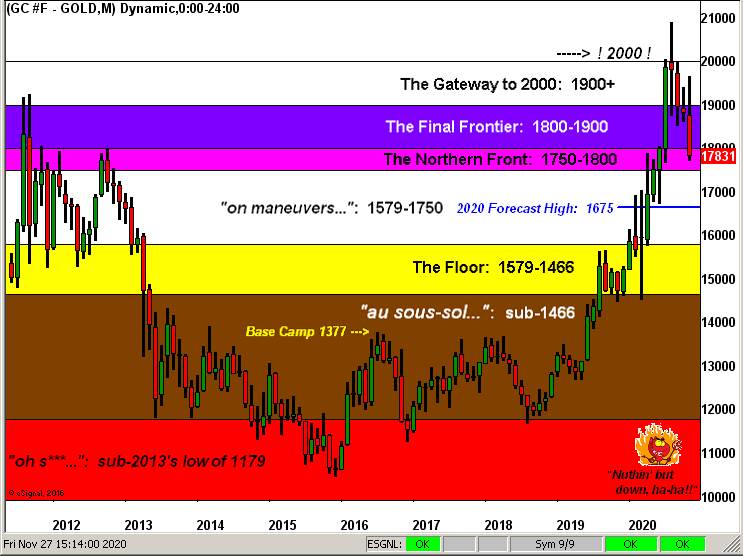 In sum, we've Gold positives galore, (swiftly slipping Dollar, evaporating yields, weakening economic statistics for which we've 15 incoming metrics in the ensuing week), and yet 'tis only Gold and Silver that are really on the skids. Double-negatively, not only does that not make a lot of common sense, but at the same time our directive sense for Gold is as bullish as it has been in quite some time. So much so that the Gold Scoreboard's present valuation level of 3639 "feels" achievable without that much passage of time, perhaps vastly accelerated should there be an all-Democrat DC post the 05 January Georgia Senatorial voting spree. "BOING!" personified, that! 'Course, all of the above aim at keeping us monetarily buoyed via life's Gold Game!