Does that mean its bull market is over, or is gold a Cyber Monday Deal?

In this correction, gold has already given back 15%, leading some to conclude that the gold bull market it finished.

After all, there are already three promising vaccines near approval.  They will be rolled out over the next few weeks and months, and life will start getting back to normal.

Many places are setting record numbers of daily Covid-19 cases.  Lockdowns are ramping up.

And the effects of Thanksgiving reunions, followed by Christmas gatherings, are likely to boost restrictions further as cases soar even higher.

Businesses will feel even more strains, and unemployment could go through its own second wave.

Here’s why gold’s bull is still in its infancy…

Although the news of several effective vaccines is highly encouraging, it will take some time to produce, distribute and administer to billions of people.

We are at best months, but more likely a year before some semblance of normalcy in our daily lives.  The effects of this pandemic will be far reaching on society and business for a long time.

That’s why, in my view, there are at least four major forces that will support gold in both the near and medium/long terms that investors need to understand.

Gold force #1.  The pandemic’s damage is not over, and that will lead to more stimulus.  If you think we’ve seen the end of money-printing, think again.  Airlines, tourism, restaurants, commercial landlords, and small retailers, to name a few, are struggling.  Many have borrowed heavily, and many others have already gone bankrupt. They will continue to face challenges for many more months.  And calls for help will endure.

Gold force #2.  The U.S. dollar continues to weaken.  After peaking at 103 in march, the U.S. Dollar Index has been falling steadily.  At 92, the index is back to levels last seen over two and a half years ago.  There’s little doubt that massive money printing, and the prospects of plenty more from Biden, could continue to pressure the dollar, helping to support gold in the process. 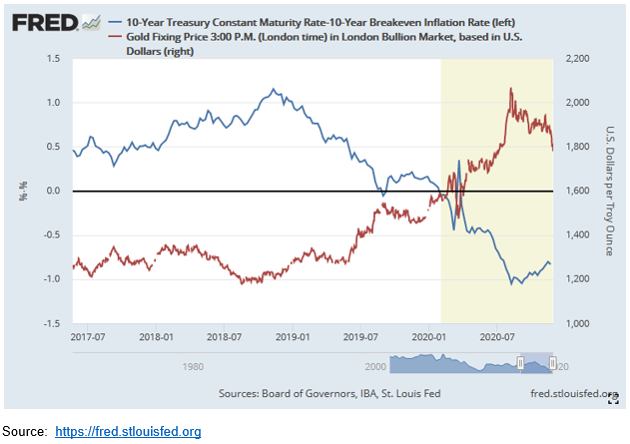 This chart pretty much says it all.  Gold’s price (red line) is clearly negatively correlated with real interest rates (blue line).  And with a Fed committed to (at least) zero rates until well into 2023, and inflation likely to rise from mega-stimulus programs, expect more of the same trends this chart demonstrates.

Gold force #4.  Yellen, the dove, is back.  Joe Biden’s pick for Treasury Secretary is none other than former Fed Chair Janet Yellen.  Her tenure ran from February 2014 to February 2018, while Biden was vice-president.  During that time, the Fed’s balance sheet grew by over $500 billion.  Today, that sounds like chump change.  But even just a few years ago that was still big money.  The point is, Yellen will be in charge of the purse strings, while her former deputy, Jerome Powell, runs the Fed.  For all intents and purposes, lines between the Treasury and Fed will start to blur. 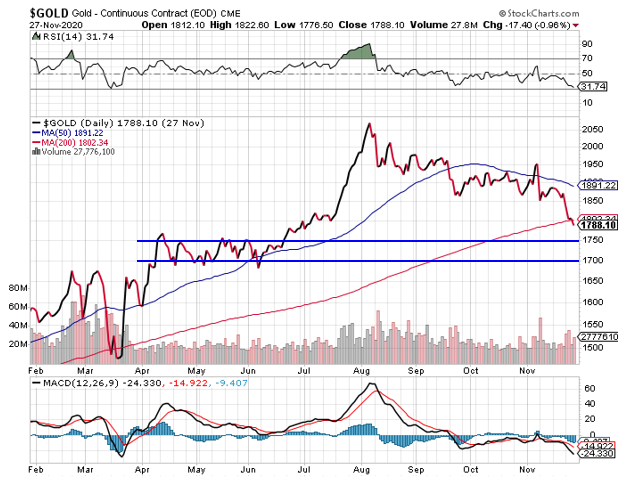 Now that gold has broken below is 200-day moving average of $1,800, it looks likely to reach for $1,750, and possibly $1,700 next.  Both the RSI and MACD momentum indicators are trending lower, confirming this move. 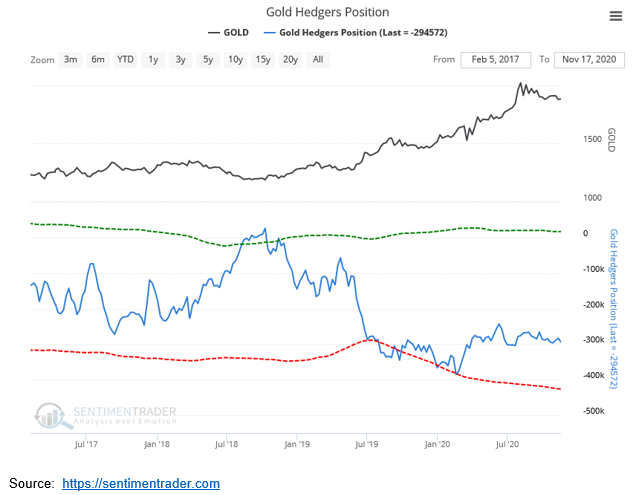 This also suggests more downside is possible before a reversal.

The index typically generates its best buy signals once it dips below 30 and then turns upwards.  We’re closing in on that sort of setup, but we’re not quite there yet.

So as I see it all the fundamentals point higher for gold, while the technicals suggest we could well see a little more near term weakness.

That just means right now gold is on sale, and the discounts may last a little longer.

Cyber Monday has been extended.  It’s time to pick up your golden bargain.