These words seem to resonate in regards to the current news about the ongoing negotiations to come up with a fiscal stimulus proposal that will be palatable to both sides of the political fence. If you have been following the current news, although you might be not be misinformed, you are certainly uninformed, or unaware out the outcome.

There are three proposals currently being considered. One a bipartisan $908 billion coronavirus relief package, this proposal is being considered in conjunction with two partisan proposals. One of which is being put forward by McConnell as the White House’s bid, and lastly a Democratic proposal supported by House Speaker Nancy Pelosi and Senate Democratic Leader Chuck Schumer.

Currently, both Treasury Secretary Steven Mnuchin and Fed Chairman Jerome Powell are supportive of the bipartisan proposal. Chairman Powell speaking at a Senate banking committee hearing said, “I look forward to reviewing with you the overall package. I do think that more fiscal response is needed.”

As reported by CBS News, “The president will sign the McConnell proposal he put forward yesterday, and we look forward to making progress on that, Mnuchin said at the Capitol before a hearing before a House committee.”

Given that House Speaker Pelosi and Treasury Secretary Mnuchin have been deadlocked and at a stalemate unable to put a proposal together that both sides will agree upon. The upside is that they have resumed talks this week, this began with a telephone call between the two yesterday.

Even though it is unclear if a fiscal stimulus package can be agreed upon and enacted soon, it has created extreme optimism that the possibility of additional and greatly needed stimulus will be forthcoming this month. This optimism has led to extremely strong gains in gold yesterday, followed by moderate gains today. 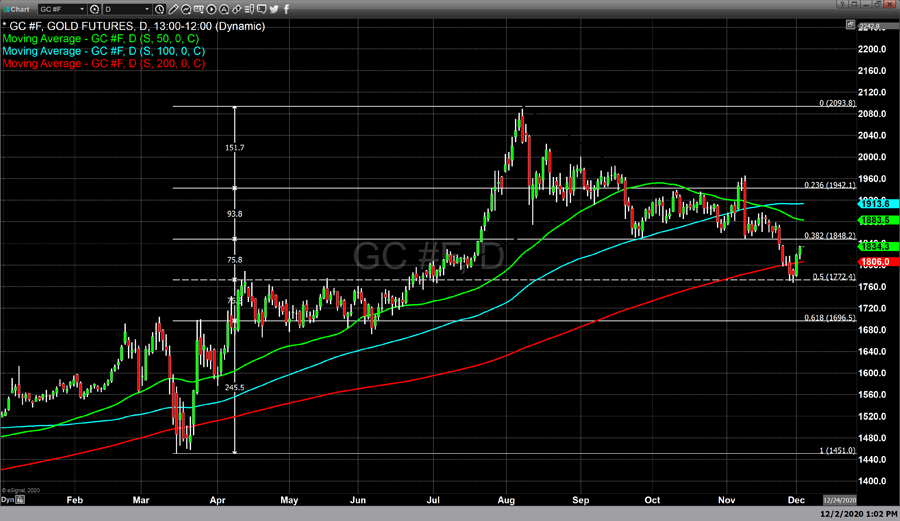 As of 4:51 PM EST, the most active February gold futures contract is up to $15.70 and is currently fixed at $1834.60. Considering that on Monday gold traded to an intraday low of $1757, the last three trading days have resulted in gold gaining approximately $80. The primary question being asked by investors and market participants is whether or not we have seen the lows in gold, and if higher pricing is forthcoming. On a technical basis, a strong case can be made that the lows achieved on Monday, followed by the sharp rises yesterday, and moderate rise today suggest that we should see gold move higher. However, we must acknowledge recent gains have been headline-driven.

Lastly, the government will run out of money on October 11 if no stopgap budget proposal is enacted. This suggests that if a fiscal stimulus proposal can be agreed upon it will be somehow tied into the pending legislation needed to keep the government open.

We continue to be cautiously optimistic and truly hope both sides can agree and implement a round of fiscal stimulus that is so greatly needed in a timely manner.